By Robin Martin – Some 125 years ago, in 1896, the United States Supreme Court decided on a case involving separate but equal facilities on railroads. The infamous case was Plessy v. Ferguson, in the state of Louisiana.

Homer Adolph Plessy was of African and Caucasian ethnicity, however, since he was seven-eighths African, his race was African so he was bound by Louisiana’s Jim Crow laws.

Plessy purchased a ticket to travel in a common railroad coach. He boarded, the conductor asked him to leave, he refused, he was arrested, taken to jail. He believed what happened to him unconstitutional, and also the Louisiana law was unconstitutional, so he filed a law suit against Judge John Howard Ferguson. 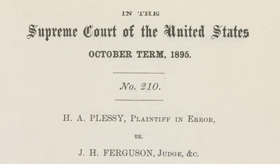 Fast forward to 1954, (it took nearly 60 years), then NAACP lawyer, Thurgood Marshall, argued before the United States Supreme Court that the Plessy v. Ferguson decision was unconstitutional. He asserted that justice John Marshall Harlan, who wrote the dissenting opinion back in 1896, that the ruling was to relegate former enslaved people as second-class citizens.

May 17, 1954, the SCOTUS reversed Plessy v. Ferguson in the Brown v. the Topeka Kansas Board of Education, et. al., that it violated the Thirteenth and Fourteenth Amendments.

Not only did the Brown v. Board of Education end separate but equal for former enslaved people, it included unconstitutional toward youth with disabilities.

This week OSOM remembers, salutes the decisions putting America on the right side of its’ history.

“And so we celebrate the promise of Brown. Most of all, we salute the vision, courage, intellectual heft and hard work of the lawyers who conceived, developed and executed the plan to dismantle “separate but equal” in American life. These men and women – Thurgood Marshall, Spottswood Robinson, James Nabrit, Oliver Hill, Robert Carter, Jack Greenberg, Lou Redding and Constance Baker Motley among others, stand as an inspiration and as a challenge to LDF lawyers today. Their journey provides a powerful example of how change happens. The 20-year Brown strategy shows us how patience, vision, intellectual rigor, and relentless focus by a small band of courageous lawyers changed an entire country.” Sherrilyn A. Ifill, president and director-counsel, NAACP Legal Defense Fund, 2014

1954 – Thurgood Marshall argued Brown v. Board of Education and wins the decision that separate but equal is unconstitutional