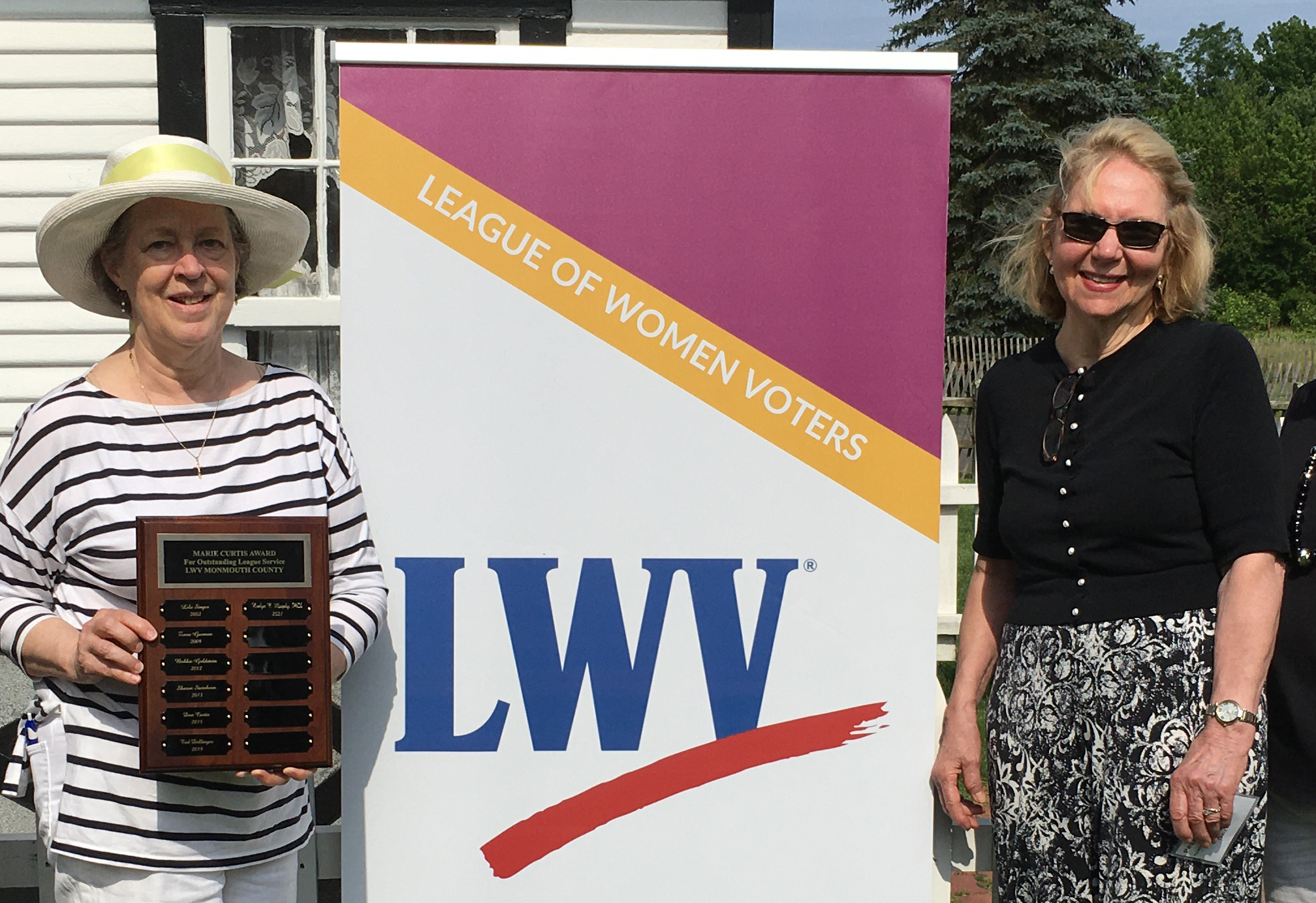 Ocean Township: The League of Women Voters of Monmouth County (LWVMC) held their Inter-League Organization meeting on Sunday, June 13, at the Township of Ocean Historical Museum at 703 Deal Road, Ocean.

At its Annual Meeting, the League of Women Voters of Monmouth County honored Evelyn Murphy (holding plague) for her outstanding accomplishments to many of the League’s programs this past year when the world went virtual. Pictured left to right are: Barbara Chaudhery, President of LWVGRA, Evelyn Murphy, President-elect LWVSM; Peggy Dellinger, President LWVSM and Sharon Steinhorn, President LWVWM. The event took place at the Township of Ocean Historical Museum.

The League celebrated its many accomplishments over the past year, which were adapted mostly for on-line platforms. These included over a dozen candidates’ forums, workshops and voter education discussions in fulfillment of the League’s mission of expanding voting and educating voters about issues and candidates.

One member, LWVSMC’s Evelyn Murphy of Neptune City, was key to the League’s many accomplishments this past year and was specially honored with the Marie Curtis Service Award for Outstanding Service.  Ms. Murphy, the Voting Services Director for the LWVSM and its president-elect, transformed the local and county League’s operations and programs to the virtual world by mastering on-line platforms and hosting most on-line events. She designed templates for candidate forums and shared her work with Leagues statewide.  She also organized many voter registration drives, conducted voting workshops, wrote and secured grants making many of the Leagues’ operations possible.  Her creativity was boundless. She even created a QR code for instant access to the state’s on-line registration site. She also found time to work at the state-level and has been a driving force behind her League’s Diversity, Equity and Inclusion commitments.  Her leadership extended to sharing her many programs and mentoring other League members in their implementation.

For more information about the LWV in New Jersey, visit lwvnj.org and look for your local LWV chapter.

The League of Women Voters was established 100 years ago by many of the same women who fought for ratification of the 19th amendment guaranteeing women the right to vote. It is a non-partisan, activist, grassroots organization that believes democracy depends on the active, informed participation of voters.