Overdoses noted as opioids continue to take a toll

Local People Out & About 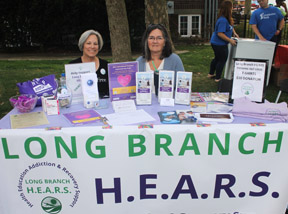 By Neil Schulman
Long Branch — On Sunday, Aug. 29, the city will recognize the toll that the opioid epidemic has taken, and continues to take, on its residents.

A ceremony will take place at Slocum Park from 1:30-4 p.m. Purple flags, representing those who have died of overdoses, will be flown. There will be speakers, tributes to the victims, personal stories of how loved ones and resources for help.

At the Aug. 25 City Council meeting, officials passed a proclamation recognizing the importance of the day

“It’s a moment to recognize all the people we have lost,” Voogt said. “There are 51 people in Monmouth County alone, just this year.”

A few years ago, Mayor John Pallone and the city council established Long Branch H.E.A.R.S., Health, Education, Adduction and Recovery Support. Its mission is to address the opioid epidemic in Long Branch and offer solutions.

To keep council informed of what’s happening, Public Safety Director Domingos Saldida will begin providing them with regular reports on the situation in Long Branch. Voogt asked for these after police liaisons shared the data at a Long Branch H.E.A.R.S. meeting.

As of Wednesday, in August there had been six confirmed overdoses in Long Branch. One may prove to be fatal; the victim was in the hospital and non-responsive. One arrest had been made in connection with these incidents.

The local justice system plans to implement new policies. Saldida said that the county courts were introducing a “diversion program,” where people arrested for drug offenses would be able to enroll for treatment and training. If they successfully complete the program, the arrest and conviction would be expunged from their record.

City Administrator George Jackson said he had spoken to municipal judge Luanne Peterpaul about the program. The city can’t implement it without approval and more details from the county courts, but it intends to use it “It’s on the horizon,” Jackson said.