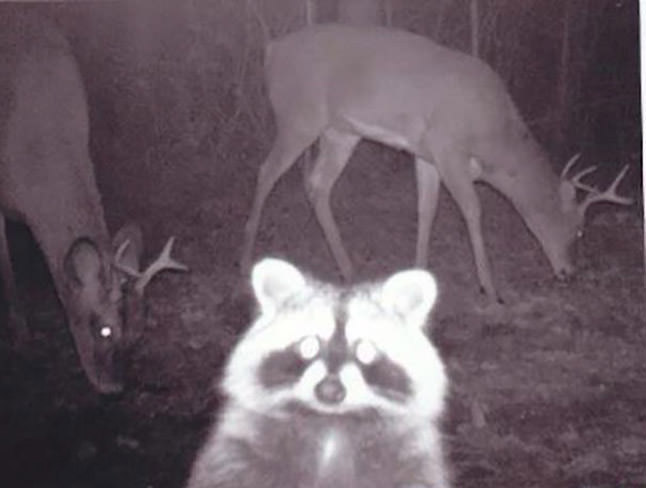 In the early days of Covid-19 when New Jersey went into lockdown, Princeton University astrophysicist Gaspar Bakos and his three young sons were looking for something to do while stuck at home.

They bought a $40 motion-activated wildlife camera, also known as a trail cam, and were amazed to discover how many critters shared their backyard and adjoining patch of woods in suburban Princeton.

First there were chipmunks. Gaspar and his sons experimented with leaving out different kinds of nuts for the inquisitive rodents to sample. Trail cam footage showed that chipmunks liked hazelnuts the best and sunflower seeds the least.

Next, they moved the camera to the woods and filmed a veritable parade of local wildlife. A fox looked suspiciously at the camera, along with a curious raccoon and possibly a mink. They paddled across Lake Carnegie to try and capture beavers on video.

“It kept us excited during the virus and lockdowns. It’s like this wildlife surrounded us, which we’ve been blind to for years,” Gaspar told filmmaker Jared Flesher, who turned the family’s experience into a short documentary titled Observatory.

As Gaspar and his sons discovered, wildlife cameras are both fun and educational. “I believe our human lives become more meaningful when we pay close attention to nature,” said Jared, who is currently producing a series of additional videos featuring Gaspar. The next one is titled The Groundhog Hole.

Capable of taking both still images and video, wildlife cameras are especially good for studying secretive and nocturnal species.

One of the first researchers to successfully employ a wildlife camera was the late Charlie Kontos, a PhD candidate at Rutgers University. In 2006, he set out to prove that fishers – a member of the weasel family – were back in New Jersey after a long absence.

Kontos set up a camera along a trail in Stokes State Forest in Sussex County. The image captured by the motion-sensor camera clearly showed a fisher, its eyes glowing from the flash, climbing a tree at night. It was the first indisputable evidence of fishers in New Jersey in more than a century.

More recently, researchers have used cameras to document bobcats in New Jersey. These endangered native wildcats are among the state’s shyest and most elusive species. A researcher could spend their entire career in the field without ever catching a glimpse of one.

One researcher, naturalist Tyler Christensen, successfully used wildlife cameras a few years ago to prove that the range of bobcats in New Jersey is larger than originally thought. He saw many interesting behaviors difficult to observe in person – bobcats carrying food in their mouths, cheek rubbing to leave their scent on trees and rocks, marking their territory with urine and feces, and male bobcats following females.

If you like wildlife and are curious about who’s visiting your backyard when you’re asleep, try a wildlife trail cam! They’re great fun for families and readily available online and at outdoor and hunting supply retailers.

You can get decent images with a no-frills camera, as Gaspar Bakos and his sons did, but spending a bit more on equipment will get you better pictures and more features. Here are a few things to consider

·        Image quality – The resolution or quality of the picture seen on the camera is measured in megapixels (MP). The more megapixels, the clearer the picture will be. For good nighttime images, go for at least 10 MP.

·        Trigger time – This is the time in which the camera detects movement and captures a picture. Better cameras have a faster trigger time.

·        Range – The distance at which the camera is able to detect motion and trigger the image is important. The longer the range, the better the camera. The average range for trail cams is 60-70 feet. Also find out the width of the camera’s field of view; you’ll see more wildlife with a wider field.

·        Flash vs. infrared – Flash cameras use a bright white LED or incandescent light to take pictures in the shadows or dark. The disadvantage of flash is that it can scare wildlife away. Infrared lighting is invisible and won’t spook the critters, but it’s more expensive.

·        Memory – Measured in gigabytes (GB), the memory is the amount of photos or video your camera is able to store. More memory allows cameras to take longer videos. Some higher-end trail cams have cellular technology as well, and can send images directly to your phone or computer.

·        Power sources – Trail cams can be powered by batteries, or a combination of batteries and solar. Cameras with at least eight sockets for AA batteries or rechargeable ones are more expensive, but the camera can stay outside longer between battery changes or charges. For convenience, look for a camera with a battery indicator.

You’ll never know what wildlife is wandering your neighborhood – especially at night – until you aim a camera outside to capture them in action!