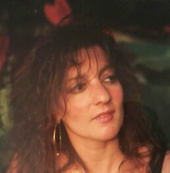 On January 30th, 2022, Joanna Friedli (nee Kourkounakis), 64 made her journey to Heaven surrounded by her loving family. Born in New Brunswick, New Jersey, to Alexander and Demetria Kourkounakis, Joanna grew up in Hillside, New Jersey and graduated from Hillside High School in 1975, where she was an active member of the State Championship Rifle Team and Cheerleading Captain, also receiving many other accolades to her credit.

She attended Montclair State University and transferred to Rowan University to major in theater. After graduation she worked at the Juilliard School in New York and followed up supplying props and sceneries to various Broadway plays in New York and to Television shows.

Joanna became a travel agent in 1985 and met her husband of 27 years, Ted, on a business trip to Disney World. Together, they opened their travel agency, Excel Travel. Their slogan was “Make Us Happy – Go Away” and their business grew substantially in no small part due to their commitment to the local community as evidenced by the many awards they received

.Joanna was also instrumental in the growth of Kick Cancer Overboard, a not-for-profit organization co-founded by her husband Ted.

It’s very ironic that after supporting Kick Cancer Overboard for over a decade (giving away almost 500 free cruises to Bermuda to families affected by cancer), Joanna is at the receiving end, not of a free cruise but of this deadly disease – cancer sucks.

Joanna and Ted traveled to China in 2001 to adopt their daughter Jordana,who studied at Rutgers and is on track to becoming a Physician’s Assistant.

Joanna enjoyed traveling all over the world with her family and hosting house parties for various occasions. She was always the first person to support her family and friends throughout all of their events in her life. She was an active member of St. George Greek Orthodox Church in Ocean, NJ and was most recently elected the President of the Daughters of Penelope Aulis Chapter 89, and volunteered at various Greek festivals throughout the state of New Jersey.

In lieu of flowers, donations can be made to:
St. George Greek Orthodox Church
1033 West Park Avenue
Ocean, NJ 07712
www.stgeorgeap.org