The College of New Jersey dean’s list of local students

February 9, 2022
By Walter J. O’Neill, Jr. Photos by SportshotsWLB – Two Blue Devils have had a big impact on the Shore Regional High School varsity wrestling team. Gabe Scalise, a senior who wrestles at 132 pounds, entered the Devils record books on Tuesday night after scoring a pin over Peter Labianca of Jackson Liberty. That victory gave Scalise his 100th career victory.

This has been an amazing year for Scalise as he is now 32-1 on the season. His only loss occurred on January 15, when he lost 2-1 to Phil Stolfa of Red Bank Regional. 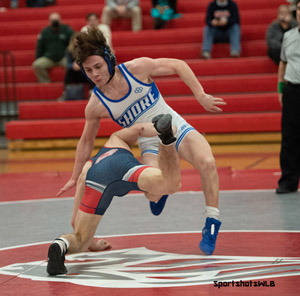 “Gabe has been a huge piece of our team for the past four years. He was a contributing part of our 2019 Central Jersey Group 1 Championship team and is a two-time NJSIAA region qualifier,” said Dave Porta, head coach. He added that Scalise is currently ranked fourth in the Shore Conference.

Scalise won the Hammonton Tournament, the Rahway Holiday Tournament and the Buc Classic. “He has such a funky style of wrestling where he is comfortable in any position on the mat,” said Porta. They were uncertain if Scalise would reach the 100-win mark since last season he had a limited number of matches as a result of the pandemic. “Gabe came into the season needing 32 wins and we knew we had a very little margin of error to get him there. He really jumped levels and once the season started, we knew the only thing we had to fear was any type of pandemic-related shut downs and cancellations.” As matches were canceled, Shore was able to pick up other matches, entered tournaments and maximized their schedule. He is now the 11th wrestler in the history of Shore Regional to achieve 100 career victories.

Porta then down played the second milestone set this season. He said it was on a smaller scale, except he was being humble. Actually it was twice the wins of Scalise, as Porta himself achieved his 200th career victory as the Blue Devils head coach. “It occurred on January 15, when we beat Red Bank Regional 46-24,” said Porta.

He is in his 13th season as head coach and has a 210-129 record. It includes three divisional championships; 2010, 2016, and 2019. Under his leadership the Devils won a sectional title in 2019. “I have also had the honor and privilege to coach every one of our 11 wrestlers who are in the 100 Win Club,” added Porta. With the victory over Jackson Liberty on Tuesday night, Shore is now 17-10 overall and 11-9 in the B Central Division of the Shore Conference, which is in second place.

This season also solidifies the fact that the Blue Devils have had 10 consecutive winning seasons. The last time Shore had a losing record was in 2012, Porta’s third year as a head coach. “Ten years in a row with a winning record is amazing, especially for a small Group 1 school like us. It definitely shows stability, consistency, and resiliency. We constantly compete with schools of all sizes, including schools from all five of the NJSIAA Groups as well as non-public schools,” said Porta. The old saying that you only get better by playing better opponents has proven to be true for Porta and his Devils.

One of the big achievements for Porta is pulling guys out of the hallway and help build them into wrestlers. “Guys on our team like Liam Rosa, Layne Raposo and Danny Bonner are students we pulled from the hallway and helped convert them. They are truly the heart of our team,” Porta said. The main foundation and backbone of the squad are lifelong wrestlers like Scalise, Jamie Mazzacco and Jake Herschenfeld.

An added surprise for 2022 were some wrestlers that had a little experience as youths that Porta and his staff were able to get on the team. “Those wrestlers are Ty Koch, Hunter Katz and Bashaar Ismail, all having a great season,” said Porta. The coach looks back on his 16 years with team, three as an assistant and still has as much fun today as he had back in 2006 when he started.