Irven George Miller, Jr. 74, passed away peacefully on Saturday, February 12,  at his home in West Long Branch, NJ surrounded by his loving family. Irv was born in Long Branch, NJ and was married to his wife, Kathryn for the last 50 years. 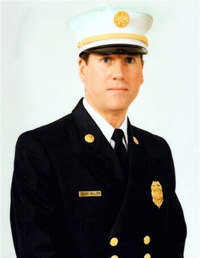 He received his MBA from Monmouth University and owned and operated IB Miller, Inc. Irv was active in the community. He was a life member of the Oceanic Engine and Truck Co No. 1 since 1970 where he served as a trustee, captain and a member of the Long Branch Firemen’s Relief Association. Later, he served as Chief of the Long Branch Fire Department in 1994. Irv resided in West Long Branch for the last 34 years of his life and served as past secretary of the WLB Zoning Board.

He was predeceased by his parents, Irven and Miriam Miller and sister, Bonnie Graminski. Irven is survived by his loving wife and three children: Patrice (Kevin) and Matthew (Erin) of New Jersey and Kate (Robbie) McIntyre of London, England plus six grandchildren: Parker, Lyla, Kahana, Kalani, Koa, and Kaia.  He is also survived by his revered and cherished nephew David (Maria) Graminski and their children Ethan and Gavin.

Visitation will be held on Friday, February 18, from 5-8 pm at the Damiano Funeral Home, 191 Franklin Avenue, Long Branch with Firemen’s services at 7:30 pm. Funeral, Saturday 9:30 am at the funeral home followed by a 10:30 am Mass at St. Michael’s Church in West End. Interment will be at Glenwood Cemetery in West Long Branch.  In lieu of flowers, memorial donations to Columbia University Irving Medical Center, 630 West 168th Street, New York, NY 10032 or the following web address: https://joinus.cuimc.columbia.edu/participant/1077 would be appreciated. The family invites you to leave a letter of condolence by selecting the Tribute/Guestbook link above.

For the safety of all, face masks are required to be worn inside our facility.

To send flowers to the family or plant a tree in memory of Irven George Miller, Jr., please visit our floral store.

Debora was born in Quantico, Virginia to a military family. The family moved around quite a bit but eventually settled in Union Beach. Debora graduated from Raritan High School and went on to receive an Associates Degree from Brookdale Community College. For 25 years she worked for Monmouth Medical Center in the Security Department as an administrative assistant and would later go on to spend many happy years working as a co-manager at Avenue clothing stores.

Debora settled in Long Branch and raised her family there.  She enjoyed Monmouth Park, the beach, gardening, reading, baking and spending time with her greatest joys, her grandchildren. She also adored her pets, her cat Boots and her dog Coco.

Debora is predeceased by her husband Philip Famulary.

A memorial gathering will be held Friday, February 18th from 5:00-7:00 PM at the Woolley-Boglioli Funeral Home, 10 Morrell Street, Long Branch. A service will be offered at 7:00 PM.

Julio Gonzalez, 52, passed away peacefully on Thursday, February 10, at Monmouth Medical Center in Long Branch, NJ. He was born on February 28, 1969 in Mayaguez, Puerto Rico and raised in Red

Bank, NJ. Julio was a very happy and vibrant person who was loved by many. He was a very hard worker and always willing to help others with no hesitation.

Julio was predeceased by his father Heriberto Gonzalez, his grandparents Delia Mendez, Matilde Gonzalez and Julio Malave and his Uncle Mario Malave.

A visitation will be held on Saturday, February 19, 2022 from 1:30pm until the time of the service at 3:00pm at the Damiano Funeral home, 191 Franklin Avenue in Long Branch. The family invites you to leave a letter of condolence by selecting the Tribute/Guestbook link on their website.

Liliana B. Fisher, 89 of Long Branch passed away Sunday, February 6.

Born in Paris, France, Liliana was raised in Pisa, Italy.  In 1955 she married the great love of her life SFC Thomas Harold Fisher, whom together they traveled to various military bases until 1967 when they retired at Ft Monmouth NJ. For many years she was a seamstress for W.H. Woolley. Liliana was a parishioner at St. Michael’s RC Church.

Liliana liked to cook, especially with and for her family and many friends, always from scratch. Chicken Cacciatore, soups and tiramisu were a few of her treasured recipes.  She enjoyed her summers at Allenhurst Beach Club, listening to music in the parks and going to Ocean Grove.  Liliana loved her Mercury Grand Marquis’, she had four of them and drove until she was 88! Most of all, Liliana wanted to spend time with her family, she returned to Italy many times.

Liliana was predeceased by her husband Thomas in 2012; her son Thomas, Jr. in 1982 and her brothers Walter and Giancarlo Baldasserini.

Susan Martin Hayes-Stasio passed away peacefully on February 5. She was born May 26, 1953 in Camden, NJ but grew up in Gloucester City, NJ. Susan graduated from Gloucester City High School and

Camden Community College before transferring to Monmouth University where she received her Bachelor’s in Education.

After graduation she began working as a 1st grade teacher in Asbury Park School District where she stayed for 33 years until retiring in June 2013. During her tenure within the Asbury Park School system she received her Master’s in Education from Grand Canyon University and served in various positions in and out of the classroom. She was Executive Secretary of the APEA, Grievance chairperson, and after retirement worked for MCEA.  She was truly one of a kind as an educator and demonstrated such an unwavering dedication to her students and their community. Susan’s service-oriented spirit also shined through in her work at St. James Episcopal Church, Long Branch where she was involved as a Sunday school teacher, youth group leader, food pantry member and finally Junior Warden of the Church.

Anyone who knew her knows that Susan loved to throw a party, and she never met a stranger. If you encountered her, you felt her vibrant spirit and infectious laugh, she could light up any room. If you’ve been to her home, you felt welcomed like family and ate! Out of all the many wonderful qualities to describe Susan loving wife and mother was her greatest accomplishment. She was married to her best friend Vinny and dedicated her life to her girls. Susan touched the lives of so many and will be dearly missed and always remembered.

She is survived by her loving husband Vinny; her daughter Kimberly Clark and husband Robert; her daughter Natalie Hayes-Scott and husband Jarrod; her grandchildren Monei, Camille and Kamryn Clark; her sisters Patricia Jay, Virginia Martin and brother James Martin, along with a host of family and dear friends.

You can go to Damiano’s website to watch the celebration of  her beautiful life  In lieu of flower, please make donations to St. Brigid’s Food Pantry at St. James Church, 300 Broadway, Long Branch, NJ 07740 (make checks payable to St. James Church with St. Brigid’s Food Pantry in the memo portion of the check)  or to METAvivor Research and Support, Inc. (a stage 4 breast cancer research organization) https://donate.metavivor.org/give/318818/#!/donation/checkout. The family invites you to leave a letter of condolence by selecting the Tribute/Guestbook link on website.

Barbara Ann Brazilian, 74, of Long Branch passed away at home on Tuesday, February 8, 2022. Born in Brooklyn, NY, Barbara has been a lifelong resident of the shore area.

She worked as a Certified Nurses Aid at Westwood Hall Nursing Home, Long Branch.
She enjoyed time with her family. Barbara will be loved and missed by many. Barbara enjoyed her time volunteering at the VFW Post 2140, Long Branch . She was also a member of the Ladies Auxiliary VFW Post 2140.

In lieu of flowers donations in Barbara’s memory to https://longbranchhears.com would be greatly appreciated.
A Memorial gathering will be held on Saturday, February 19, 2022 at the Hoffman Funeral Home, 415 Broadway, Long Branch from 1:00pm until 4:00pm

To send flowers or a memorial gift to the family of Barbara Ann Brazilian please visit our Sympathy Store.