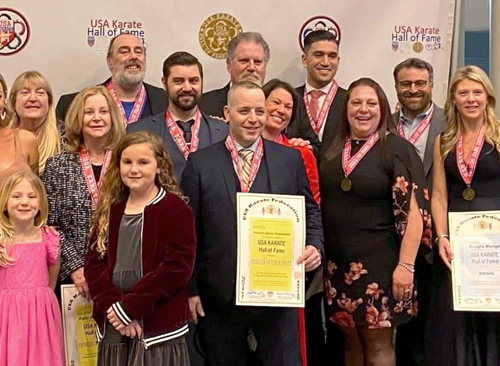 Organized by Walter J. O’Neill Jr., over 360 people from 24 states and four countries gathered at the Eatontown Sheraton on Saturday to celebrate their induction into the USA Karate Hall of Fame. Among them were black belts from the Atlantic Karate Academy in Long Branch who had won gold on a national or international level or were members of the USA Karate National Karate Team.

The Atlantic Karate Academy was founded by Patty Booth-O’Neill in 1979. She and her husband, Walter J. O’Neill, Jr, were the chief instructors and both were inducted into the USA Karate Hall of Fame in 2015. In 2019, Walter was presented the USA Karate Pioneer Award.
Members of the Hall of Fame Class of 2022 from the Atlantic Karate Academy were members of either the USA National Team or the USA National Senior Team. Decades later, they are now adults, some with children of their own and their own amazing accomplishments in life.

“Inductees must have made exceptional contributions that furthered the growth, reputation, and character of sport karate. They must have been active members of Team USA from 1978-to-2009,” said Walter J. O’Neill, Jr. He added that every inductee on Saturday night was a National Champion, All-American and a medal winner for Team USA in international competition. “The 2022 HOF was the first time the event was not held in Ohio, home to the Karate Hall of Fame. It was an emotional evening to see so many of our former students, teammates and rivals being celebrated and inducted into a very elite fraternity. I was privileged to see my wife receive the Pioneer Award and watching our son being inducted as a member of Team USA. Nationally, there is only one other mother-father-son family inducted into the HOF.”
L-R, are Chimen Montivero, Kevin Schaubert, Danny Tureaud, Rachel O’Neill with Kennedy & Charlotte, Gwen Gorecke-Magodsko, head instructor Patty Booth O’Neill, Sensei Mickey Major, Shay O’Neill, head instructor Walter J. O’Neill Jr., Vinnie Napaletano, Hanna Greenwood, Brendan Wu-Gittell, Matty Geltzeiler, Allegra Mango, Robert Roncaglio and Carley Roncaglio-Marotta. 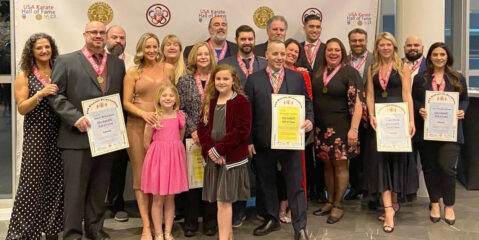