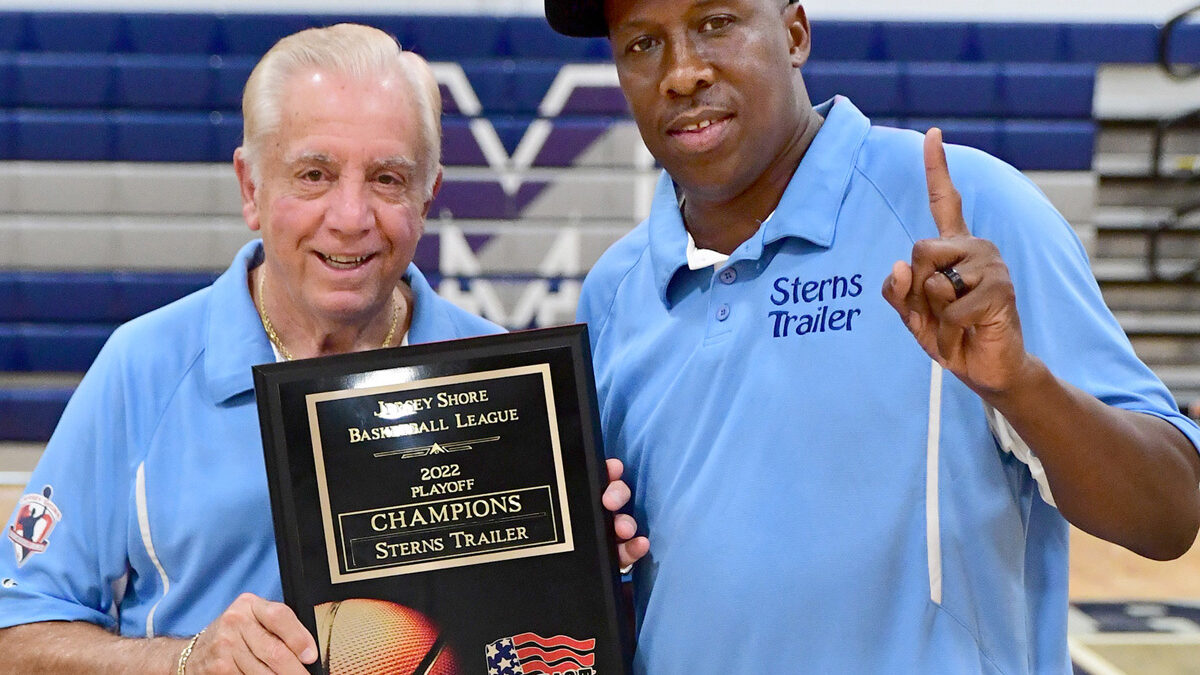 By Walter J. O’Neill, Jr.
Manasquan – The 54th season of the Jersey Shore Basketball League sponsored by Freedom Mortgage, concluded with an exciting championship match-up between Sterns Trailer, who pulled out a close 119-117 victory over Orthopaedic Institute.

All games were played indoors at Manasquan High School in a packed gym. Sterns Trailer, coached by Ron Pastore and assisted by Rich Brunson, earned their third JSBL title with the close victory. Their other two titles came in 2005 and 2012, and they were runner-up in 2006, 2009, 2013, 2014 and 2015.

The JSBL had one of its best summer seasons in nearly a decade. Two former NBA players, 24 current professional players who have contacts overseas or playing in the G-League, 48 former or active Division 1 NACCA players, and 17 former or current Division 2 scholarship players and several all-star high school graduates.

Shavar Reynolds, who graduated from Manchester High School and played three seasons at Seton Hall University before transferring to Monmouth University was the championship game MVP. He finished with 32 points, five rebounds, 10 assists, and two steals. 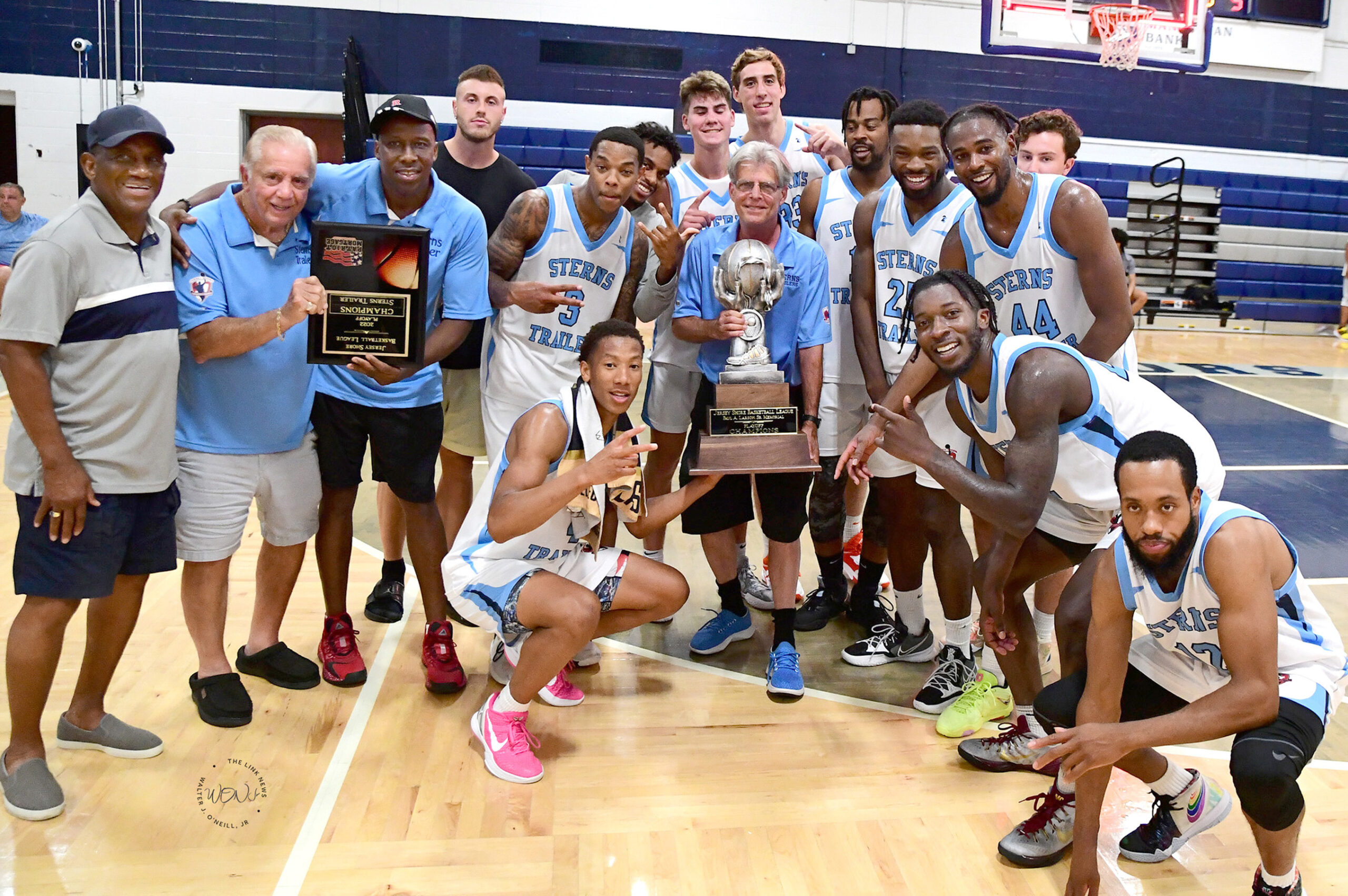 Reynolds made first team all JSBL this summer finishing with 210 points, made 20 of 23 foul shots, had nine offensive rebounds, 50 defensive rebounds, 62 assists, 21 steals and blocked three shots. “This game was a really high level of basketball,” Reynolds said. In the past, the league had players just going out for individual stats, but this summer all the players were very involved in team play, and defense.

Three other players for Sterns Trailer scored in double digits. Kessly Felizor, graduate of Hightstown High School and New Haven, had 25 points. He finished with 10 rebounds, two assists, one steal and one block.

Jack Scott, the quietest player in the league scored 13 points. He is a graduate of The Hun School and attends Princeton University. Scott had some very clutch rebounds and baskets at the end of the game to keep Sterns Trailer in the lead. Scott had nine rebounds and one assist.

The last Sterns Trailer player to score in double digits was Rob Ukawuba. He is a graduate of East Brunswick High School and NJIT. Standing at 6’4” he can play guard or power forward for Sterns, and he is powerful. He had 11 points, three rebounds, and two assists.

Sterns Trailer only loss, 123-92, this summer was on July 5, to the WCT Warriors. “We were missing a few that night,” said Pastore. “Reynolds, Cale, Felizor, and Ukawuba.” He praised all his players for their commitment to the league. “It’s not easy for many of these kids. If they are still in school they have camps they must attend, and if out of school they are working and preparing for the next level.”

Leading Orthopaedic Institute in the loss was Louie Pillari. He is a graduate of CBA and Monmouth University. He finished with 28 points, four rebounds, one steal and two blocks.

One of the fastest players in the JSBL is Trevis Wyche. He is a graduate of St. Peter’s Prep and Saint Peters University. He had 24 points in the loss, five rebounds, 14 assists, and two steals.

Another St. Anthony High School graduate and Connecticut alumni was RJ Cole. Who played last summer for the NBA Lakers in the G-League, scored 19 points.

Steve Harris who stands 6’7” and played his college ball at East Stroudsburg and plays professional ball in Sweden for Jamtland Basket, had 14 points, nine rebounds, one assist, two steals and two blocks.

The JSBL championship trophy is called the Paul Larson Award, as he has sponsored Larson Ford in the league since its inception. Larson Ford also had a total of 10 JSBL titles. They won their first in 1974 and their last was in 2019. Ron Kornegay, the JBSL Commissioner, presented the championship trophy to Fred Stern for the 2020 season.

Leading all Orthopaedic Institute players in scoring was Louie Pillari, a graduate of CBA and Monmouth University. He scored 28 points in the 119-117 loss to Sterns Trailer.

Going high for a basket is 6’7″ Kessly Felizor of Sterns Trailer while 6’8″ Steve Harris of Orthopaedic Insitute plays defense.

NJIT graduate Rob Ukawuba (25) plays for Sterns Trailer this summer in the JSBL. He scored 11 points in the win.

MVP of the 2022 JSBL Championship Game was Shavar Reynolds. He scored 32 points leading Sterns Trailer to their third overall title.