Long Branch — The theme of the 39th Annual New Jersey Friends of Clearwater’s Clearwater Festival, taking place this Saturday, is “What Would Pete Do?” a tribute to Clearwater founder Pete Seeger.
Ingrid Heldt, Vice President of the group, knows what Pete would do because she spent extensive time with him, becoming friends over the last decade. 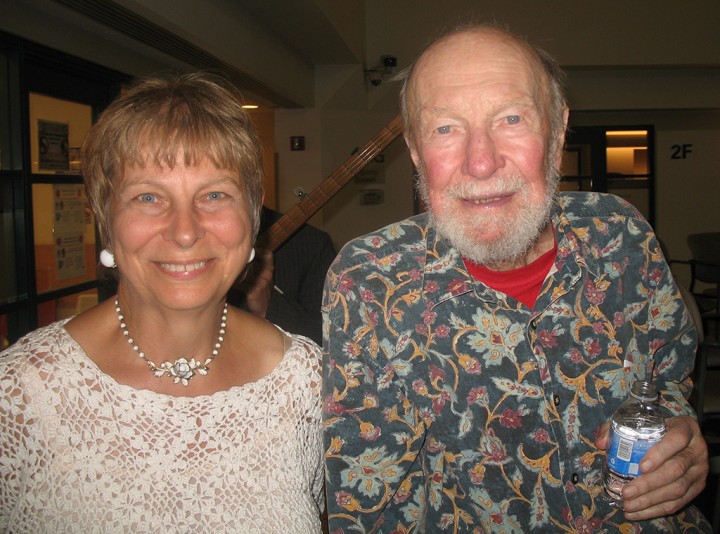 (Elliot Stephen Cohen photo) Ingrid Heldt with Pete Seeger at the Beth Israel Music Awards Ceremony in Manhattan in 2013. Heldt, the Vice President of New Jersey Friends of Clearwater, will be at this year’s festival, with the theme “What Would Pete Do?” (ALL_RIGHTS_RESERVED © Elliot Stephen Cohen)

Seeger’s folk songs, such as “If I Had A Hammer” and “Turn Turn Turn,” have become known around the world. When Seeger first showed Heldt a German translation of Where Have All The Flowers Gone, and asked her to perform it, she was surprised – because she’d heard the song on Marlene Dietrich albums as a child and assumed it was an old German folk song, not realizing Seeger had written it.

But Seeger was also an environmentalist. The Clearwater Festival is named for the sloop Clearwater, which he sailed down the Hudson River, singing songs to raise awareness of water pollution.

Seeger passed away this year, at the age of 94.

Heldt first met him a decade ago, when a friend of hers, Spook Handy, sent a song to Seeger to look at. Pete liked it, and invited Spook to perform in a concert in his hometown of Beacon, New York. They would go on to become close friends and musical partners, with Handy frequently backing up Seeger.

Handy will be one of the many people who knew or was influenced by Seeger playing at this Saturday’s festival.

During one event a while back, Heldt decided to go to the Clearwater booth there, to see if she could resolve an issue with her membership.

“I walk up to the booth, and it’s Pete himself manning it,” she recalled. Seeger explained that he was there to give the organizers a chance to get some lunch, and invited her to stay and talk.

After that, she made regular visits to Beacon, attending concerts, a Circle of Song, weekly peace gatherings, and getting to know Seeger. She estimates she travelled 60,000 miles in round trips to visit him in the last decade.

Heldt, who has four CDs of her own and has written music for commercials, also worked with him musically. They co-wrote a couple of songs together. One of them, Seeger had the melody and first verse, which had been written by Malvina Reynolds, the songwriter who penned his hit “Little Boxes.” Heldt wrote a couple of more verses.

She also helped him on a song “Raise Your Voice,” which he described as “a lullaby for future rebels.”

Seeger seemed tireless, she said. He was the first to arrive at concerts, and the last to leave, gathering the garbage and taking it away in his electric van.

For years, when he performed the song John Henry, he split wood on stage to illustrate the song about the steel driving man. When his insurance company said this was a liability, he instead got a large hammer and anvil. Heldt said she could barely lift the hammer, but saw Seeger using it while performing four years ago, when he was 90.

He was a source of inspiration, she said. For example, he encouraged her to make a version of the folk song “The Water is Wide.”

“He said a lot of people have recorded it, everybody likes it … you should make it a number one song,” Heldt said. “It’s a nice idea. I definitely would record it. Pete wrote one verse for it; I’m definitely doing Pete’s verse.”

Heldt has done more than just music. Her photography has been recognized, especially around this time of year.

“I don’t know if I had a premonition or not, but I took 400 photos of the World Trade Center towers when they were beautiful,” she said. When she developed them, the light reflecting off the Twin Towers was so bright that sometimes the image was blanked out.

After Sept. 11, she used these images in a video to her song “Poetry in Stone.” It drew heavy attention around the internet.

Seeger’s work inspired Heldt to help start the Circle of Song for the New Jersey Friends of Clearwater. Unlike many circles, which fade away after a year or so, this one is thriving after four years, with both singers and listeners attending the monthly sessions. It began at the Asbury Park United Methodist Church, but outgrew that space and moved to a coffee house, then outgrew that and moved to the Eatontown Community Center this year.

The first session at the Eatontown Community Center was just after Seeger died. Sixty people attended, more than the old venues could have handled.

The Circle is held the first Sunday of each month, 2-4 p.m. Donations collected are split between the food pantry at the Asbury Park church and Friends of Clearwater.

One of the attractions at this year’s Clearwater Festival is a Circle of Song. One of the three stages will feature more than a dozen musicians, many of who knew or were inspired by Seeger. In addition, visitors will be given an opportunity to go on stage and perform.

The Circle of Song Stage is in addition to two other stages, featuring local favorites such as The Wag and Goldenseal.

It’s possible a few surprises will take place as well. One year, Bruce Springsteen dropped by.

The Clearwater Festival will be held on Sept. 13, 11 a.m.-7 a.m. on the Great Lawn. For more information visit www.mcclearwater.org/festival.php.