West Long Branch — It isn’t a job for anyone afraid of heights, ladders, harnesses, and bucket lifts, but those are the job requirements for high-end detailers these days. 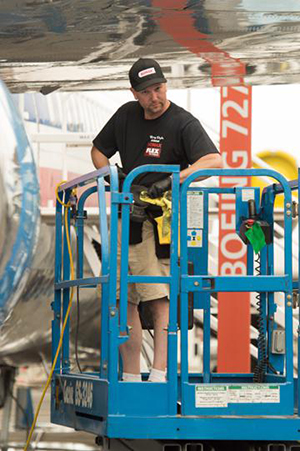 Armed with a Flex polisher and SONAX Perfect Finish polish, Long Branch police officer Bob Wiener of Finer Details rode the booms up to polish the paint on the original Air Force One (AFO) presidential jet’s wing, fuselage, and nose. He then tackled the badly oxidized paint on the supersonic Concorde Alpha Golf. Both historic airplanes are on exhibit at Seattle’s Museum of Flight.

Part of an annual pro bono detailing project led by master detailer and trainer Renny Doyle of California’s Attention to Details and Detailing Success, Wiener is a two-time member of the elite Air Force One Detailing Team who has been restoring the paint on AFO since 2003. This year they also began a restoration detail on the supersonic Concorde Alpha Golf as well.

Handpicked out of over 250 detailers nationwide, Wiener is a veteran team member with a great deal of experience polishing the presidential jet’s bright work (aluminum) and cleaning contaminants from the paint, which was in excellent condition this year, compared to past years.

“This year, we moved AFO into a preservation rather than restoration phase in preparation for its permanent indoor exhibit coming next year,” says Wiener. “Last year, we used professional-grade SONAX Perfect Finish Polish with a permanent nanocoating we thought would protect it against the weather and we were right.”

The Concorde, which will remain on the tarmac indefinitely is exposed to Seattle’s torrential weather and has never been detailed since arriving at the museum in 2003.
“Even after washing the dirt off, the paint on the Concorde was badly oxidized making it cloudy, and in some places the paint is flaking due to neglect,” says Wiener, whose Finer Details provides high-end paint correction to customers on the Central Coast of New Jersey and Monmouth County.

“We began correcting the paint and removing all the contaminants from the Concorde’s fuselage, wings, and nose. When we got started, the Concorde was a dingy off-white. When we left, it was a brilliant, sparkling white.”

Wiener is also one of the “Jersey Crew” three AFO team members (one ex-Jersey City cop, one retired career firefighter in Flemington, and Wiener, who is still a fulltime Long Branch police officer) located in NJ who come together voluntarily to help with state community projects. They have refurbished fire and emergency vehicles in Union Beach, damaged during Hurricane Sandy; and restored four antique fire apparatus trucks for the New Jersey Fire Engine & Equipment Museum.