Tinton Falls — The Associated Humane Societies of New Jersey have suspended use of all volunteers at their Tinton Falls facility, saying that because they would not follow protocol, an “unacceptable” amount of injuries have occurred to animals and people.

But the volunteers say that they are being blamed unfairly, often for incidents that the paid staff were partly or wholly responsible for. They also say that there was no true protocol for them to follow. 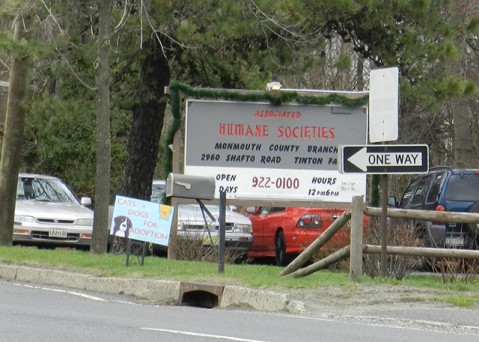 A group of more than 20 volunteers has issued a statement that the allegations are “not only false, but heartbreaking and infuriating.”

They plan a peaceful protest outside the Shafto Road facility this Saturday at 11:30 a.m.

Both Humane Society officials and volunteers say their primary concern is the well being of the animals.

On April 12, the Associated Humane Societies and Popcorn Park (part of the same group of societies) put up a post on Facebook saying why they had temporarily stopped using volunteers. They posted a similar notice on their website the next day.

“Due to an unfortunate chain of events that took place within the volunteer program at our AHS Tinton Falls facility, we have decided to temporarily pause all volunteer activities while we restructure our program,” the statement on Facebook read.

The society said that numerous incidents had led to the decision.

“The amount of injuries sustained to both animal and human is unacceptable. It supersedes any other amounts at any other Facility operated by AHS that has an active volunteer program over the years,” it continued. They also said the volunteers refused to follow the protocol in place.

But volunteers say that some of the incidents they’re being blamed for were not their fault, or details were being misstated. They call this a “false PR campaign.”

The AHS said that several incidents resulted in death and injury to animals.

“A volunteer at an outreach allowed an AHS dog to maul an owned puppy which was gravely wounded, and needed emergency medical treatment at Red Bank Vet Hospital, which cost AHS several thousand dollars,” said the AHS statement on Facebook.

However, volunteers respond that the volunteer had the shelter dog on a tight leash and tried ot keep control of the dog; the puppy was being walked on a long leash by an owner not paying attention.

“This was an unfortunate incident, but the mastiff puppy has recovered and is currently at home with his owners. The devastated volunteer states that the owner had his dog on a long lead and wasn’t paying attention,” the letter from the volunteers states.

The AHS also claimed that a cat was killed by a dog when the canine was being “cat-tested.” Volunteers respond that the incident was done by professionals.

“This incident occurred during a cat/dog test performed by staff members 3 years ago. Volunteers were not involved.”

“Another one of our dogs was severely bitten in the rear area by a dog when two volunteers were walking them, and ignoring our ‘walk dogs separately’ policy,” the AHS stated. “This incident also cost several thousand dollars for emergency medical treatment at Red Bank Vet Hospital.”

Volunteers say that in this case, there’s video footage that shows this was not the case.

“Two dogs were not being walked together. A volunteer was returning a dog to its kennel and noticed that another dog had gotten out of its kennel and was off leash. At the same time, another volunteer was bringing a dog out for a walk. In a rush to get all dogs to safety, as well as contain the off leash dog, the volunteers got a little too close to each other. One of the dogs bit the other’s hindquarters.… The injury that did occur was minor, but the lack of an in-house AHS veterinarian caused a medical expense at an outside vet hospital. This incident can be confirmed via the video surveillance which is on 24/7 at the shelter.”

The AHS also says that volunteers solicited funds, but did not return the money collected to the shelter. Volunteers say that if this is true, charges should be filed against those who cheated, and dismissing the whole program is not the way to go.

The AHS says that they run successful programs in their other locations in the state, but Tinton Falls had problems.

“The situation at Tinton Falls turned into a recipe for disaster. Had protocol been adhered to as it is at our other two locations, 99 percent of these incidents could have been prevented. Our methods and guidelines work, which is why we have continued to have positive volunteer programs available at our other two facilities that run without the kinds of issues we have tried so diligently to prevent in Tinton Falls,” their statement reads.

Volunteers say that one of the problems was there were no written protocols given to them, just verbal. “Whenever we were told ‘Newark says you have to do XYZ,’ we followed the new set of rules. Additionally, the volunteer program had its own set of rules that gradually introduce new volunteers to animals in a careful, controlled manner,” their letter states.

Mechele Shoneman, who has been volunteering at the Tinton Falls location since 2010, says that she and other volunteers feel that the AHS is treating them unfairly, and they’re not really equipped to counter it.

“We have organized to help dogs, not deal with the media,” she said.

Statements from both sides say that they have the interest of animals at heart. Volunteers have told The Link that they worry the animals will not be socialized with people and will not receive as much attention with just the staff covering. The AHS has stated it is bringing in staff and volunteers from other locations to help care for the animals.

A Facebook page for the Friends of the Tinton Falls AHS was taken down. Volunteers say that it would have shown they have thousands of supporters. The AHS has said it intends to restore it within a few days.

This has divided many supporters of the AHS. One Facebook comment on the announcement said “Wow, no common sense or respect for life with these certain ex volunteers. Plz be thorough on your new applications. Horribly sad that volunteers can be so irresponsible.” Another said, “Nope, I’m not buying it. You don’t close down an entire volunteer program because a couple people don’t follow protocol, or because of a couple unfortunate incidents.”

One volunteer at the society, said she did not want her name used because she is “hoping to get back in” when the new policies are put in place. But she said she was “heartbroken” at being told she could no longer help the animals there.

“They ripped a part of my whole life,” she said. “I’d leave my family on the holidays to help.”

She thought that this was an issue with “upper management,” but said that she was discouraged with some of the nasty comments she’d seen both sides. And she noted that volunteers were providing evidence to back up their side.

The situation seemed a little ridiculous, she said. “Volunteers getting fired? What a joke.”