NAACP Breakfast showcases how men can make a difference

By Matt Engel
Long Branch — “Clap your hands twice if you hear me!” 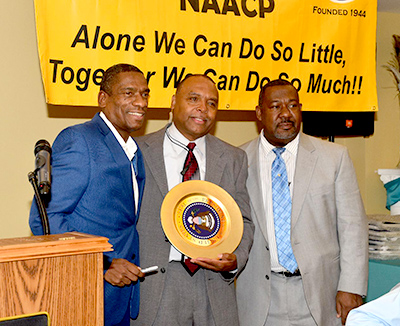 With those words, John Blanton, founder of the group Men Make a Difference (M2AD), commenced a morning of speeches, mixed with singing, breakfast, and even the appearance of local dignitaries such as Congressman Frank Pallone, and Lieutenant Governor Kim Guadagno. The Saturday breakfast was co-hosted by the Greater Long Branch NAACP, whose slogan reads “Alone We Can Do So Little, Together We Can Do So Much.” The main goal of the event was to encourage men to take more of a role in their community.

“I want older men to be role models to younger men for education and jobs, and being loving family members,” said Reverend William E. Coleman, the recipient of this year’s Man of the Year Award.

The Man of the Year Award is given to someone who has “distinguished himself as a Father, Surrogate Father or Mentor in an extraordinary manner,” according to Men Make a Difference. The organization, which is based in West Orange and headed by Long Branch native John Blanton, collaborates with churches, school districts, and community groups to help create and sponsor programs such as employment training and career counseling.

The keynote speaker of the event was Thabiti Boone, who was appointed by President Obama as a representative for the Fatherhood Mentoring Initiative. Boone overcame a tough childhood in Brooklyn, which saw him become a teenage father, forcing him to abandon his dreams to play in the NBA in favor of raising his daughter. 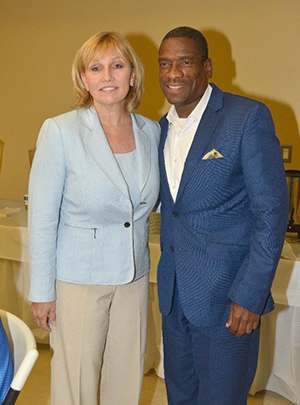 For the past seven years, he has also moderated the Congressional Black Caucus Legislative Convention forum on Fatherhood.

In his speech to the congregation, Boone touched on subjects such as violence among youth, and also referenced the struggles in Congress to get race relations right. He also spoke about the role of religion for young black fathers being in jail, stating, “When God is with you, there is not a prison cell that can hold you.”

Boone closed the speech by saying, “These homes being headed by our single mothers has to stop. At the end of the day, we must answer to our children and our God.”