It was a proud ceremony with over 70 people in attendance on Saturday to honor Monmouth Beach’s Dominick Gagliano as a WWII Veteran. 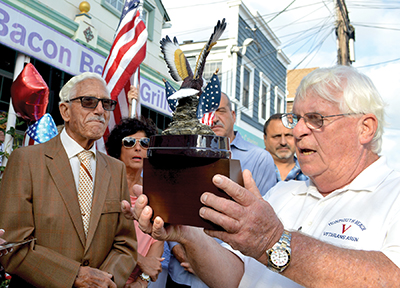 Gagliano attended the event with his wife Mikalina and many friends and family at Beach Grille in North Long Branch. The event was organized by John Sheeran, President of the Monmouth Beach Veteran’s Association.

These days Dominick is probably best known for his sense of humor and the sparkle in his eye… and telling fascinating stories full of details with his heavy Italian accent.

He told about how one day he slipped away from his unit to go to the bathroom. “I needed my privacy,” he said. “I didn’t want to go around other guys. A German soldier, who I didn’t even notice was there, waited until I was done then surrendered to me.”

“We are losing about a thousand Veterans a day, but the good Lord spared this guy for us,” Sheeran said while introducing Dominick with Army stories. He then presented him with a statue of an American eagle with a plaque summarizing his time as a soldier.

Dominick, a Private in the US Army 9th Infantry Div., was inducted into the Army when he was 18. He was originally from Italy, but moved to Newark, and when he entered the Army he was not yet a US citizen. He did become one four years later.

Gagliano landed on Utah Beach on D-Day, 1944, with his best friend, who was killed right beside him. Sheeran told the story of how Dominick heard his grandfather call out his name, and when he turned to look, the guy next to him got shot. As Sheerin spoke, Dominick nodded his head in agreement, remembering how his grandfather’s voice had saved his life.

On June 26 Gagliano was wounded, for which he received a Purple Heart. He also received one from the Federation of French War Veterans, the French Medal of Libertie for Normandy – Operation Overlord.

When the group of over 70 people went outside of Beach Grille to take photos, spilling into the street and traffic kindly slowing down to go around them, Gagliano shrugged out of his suit jacket and slid into his Eisenhower jacket from 1944, all smiles and proud that it still fit.

Dominick’s favorite story, though, was about a woman who saved his life while in Belgium.

“My unit fell asleep and when I woke up they had gone. The town was surrounded with Germans,” Dominick said. He said an older woman called out to him from her doorway asking if he was Italian. She ended up hiding him in her attic for three days.

“She had left Rome to live in Belgium because she didn’t agree with fascism,” he said.

After the Germans left the town Dominick was able to rejoin his unit.

“By taking me in she saved my life. The Germans would have killed me.”

Dominick said that after the war he went back to Belgium to visit and thank the woman and her family for saving his life.