Long Branch — Online auctions have been very successful for the city, bringing in an estimated $100,000 extra in two years. 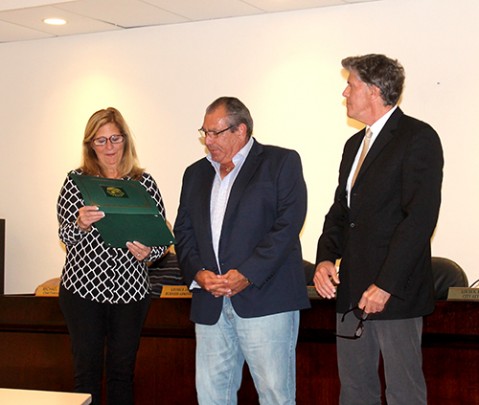 At the Oct. 24 City Council meeting, where council authorized the online auction of a variety of items from old police cars to iPads to gas heaters, Lt. Charles Shirley explained how going online had made a big difference in the auction process.

Before 2015, people had to come to Long Branch to bid on items, and it was considered mostly a way to get rid of old, unneeded equipment.

“We would have the people come and visit the auction, and we would sell them for what we thought was a minimal price,” Shirley said.

The city then began researching online sites that were authorized to conduct auctions for municipalities. After some research, they settled on GovDeals.com.

The result is that a lot more people saw the items, and bidding became much more competitive.

“It was really about our audience. We used to sell a car and we would get $50 for it,” Shirley said. The same three or four people generally came to the auctions, and agreed not to bid against each other.

In the two years with GovDeals, Long Branch has made $137,000 from its auctions. Shirley said they estimate under the old system they would have made $100,000 less.

Knowing that they can get a better rate out of auctioned items has also let the city change when it sella them. If they’re put online while still serviceable, the proceeds will be enough to help with the purchase of a better replacement.

Mayor John Pallone said that when the process started, he saw how effective it was. The city had been planning to get rid of old iPads.

Not that he’d have been able to bid on them; city employees aren’t allowed to bid on auction items.

Despite a rainy summer keeping people off the beaches fairly often, lifeguards were busy this summer.

OEM Coordinator Stan Dziuba says that the annual beach report has been compiled. Over the summer (and a few weeks afterward while the weather was nice), the 85 full time and 45 part time lifeguards performed 871 water rescued. Of those, 143 were “late shift” rescues, after the beaches officially closed at 5 p.m. but where Long Branch lifeguards stayed late because people still used the beach.

There were also 7,832 “preventions,” when a lifeguard left the stand to issue a warning, The beach also had 1,876 code enforcement issues, such as people littering.

There were 160 major medical incidents that required a trip to the hospital, and 110 cases of lost and found people, where a child or adult got separated from their party.

Dziuba reported that the Junior Lifeguard program continues to grow, from 50 participants in 2013 to 135 this year.

Council members asked about getting Long Branch residents involved in working at the beach.

“Anyone from Long Branch High School who has applied and passed the tests has been hired,” said Dziuba.

Council President Rose Widdis also suggests getting some senior citizens to help the ticket booths, along with the Long Branch teenagers who often work there.

“I just think it would be nice to have a relationship with students and seniors,” she said.

For the last 13 years, the annual Columbus Day Parade has been organized and sponsored by Joe Mercadante, and he’s been the parade chairman for the last 15 years. Council recognized his work for the most recent October 7 parade at their meeting.

Pallone praised Mercadante’s dedication and efforts in coordinating all the participants.

“It’s an endeavor I think you start the day after [each] Columbus Day,” he said.