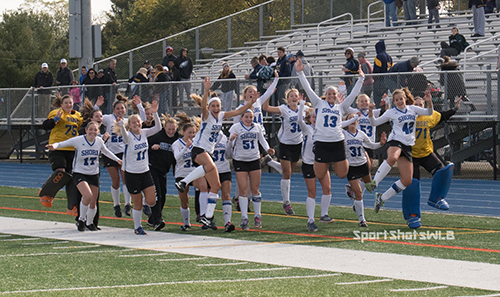 It has been a bitter sweet season for Kelly Koenig and her 2018 Shore Regional High School field hockey team. On the bitter side, it was the first time in 43 years that the Blue Devils didn’t win the Shore Conference divisional title. On the sweet side, Koenig won her 100th career game as a head coach.

Koenig took over the team in 2014, after her successor Nancy Williams retired as the most winning field hockey coach in the United States. The Blue Devils have a long history of field hockey dominance and during her first year as head coach, Koenig steered her squad to an NJSIAA Sectional and Group title. They also won their divisional title in 2014, 2015, 2016 and 2017.

Over the past four years Koenig has averaged 25 wins per season to reach the magical 100 career victory. That big win came at the expense of Florence in NJSIAA North Jersey, Section 2, Group 1, quarterfinals. The Blue Devils who ranked second in that bracket beat the 10th seed Florence 9-2.

Shore had an opening round bye and are now scheduled to play Point Boro, third seed, on Halloween. The top seed in the bracket is Metuchen who faces fourth seed, A.L. Johnson in the other semifinal on October 31.

Maggie Lamb, who possess one of the hardest shots, scored four goals and had one assist for theBlue Devils in the victory over Florence. Lily Santi scored three goals and assist on three, while Isabella Saponaro scored twice.

The win gives Shore an 18-3 overall record. This season after the Shore Conference realignment the Devils are playing in the A Central division, with longtime foe Rumson-Fair Haven. The Bulldogs beat Shore twice during divisional games which gave them the title, and also beat Shore in the finals of the 2018 Shore Conference Tournament.