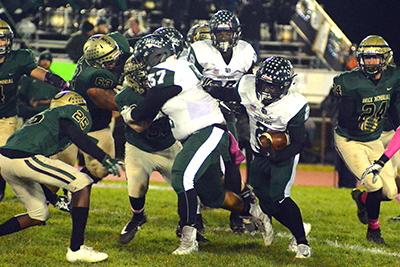 Things were not looking good for Long Branch in the early going of their road clash with Brick Memorial. Well into the first quarter the Mustangs had a 7-0 lead and were perched on the LB seven-yard line with a first and goal.

At this point of the contest it was just impossible to imagine that the Green Wave would go on to win by a 40-14 score in a romp. However, five touchdowns by running back Jermaine Corbett, including two in the air, was in their future.

Brick took the opening kickoff and marched down the field confidently to put up 7 points. Long Branch countered with a lackluster three and out series. Memorial fielded the punt at their 30 and drove down to the Wave seven-yard line. On third and seven Brick quarterback Tyler Sindel found Jeff Lavarin in the end zone. However, safety Marc Dennis made a spectacular play and hit the receiver at the same instant that the aerial came in, dislodging the ball to deny the score. The Mustangs then failed on a field goal attempt that went wide.

On the second play of the following LB series Corbett jumped through the line via a block by lineman Hunter Metzler. The junior back then outsprinted the entire defense right up the middle for a shocking 80-yard touchdown run. In just moments the momentum shifted from Brick to Long Branch and it would stay that way for the rest of the evening.

The next LB score would come in the second quarter, a 65-yard drive comprised of three key plays. The trek started with a 19-yard completion from QB Marc Dennis to Jayon Farrar. A 16-yard run by Corbett advanced the squad to the Brick 30. On the very next play Corbett took the handoff and went left. However, he surveyed the line and saw that lineman Raul Rivera was clearing a lane. Corbett then went right, slipped by Rivera and rambled the 30 yards through traffic and into the end zone for a 13-7 advantage.

The Wave magic would continue in the very next Mustang series. On the first play of the set QB Sindel pitched to halfback Jeff Lavarin, but Sindel was hit by linebacker La’Qym Morris at the moment the ball was released. Wave linebacker Latrell Bennett simultaneously came charging in and slapped down the lateral. It bounced right back into Bennett’s hands and he ran it in to complete a 35-yard scoring strike.

Long Branch would score one more time in the first half. The 66-yard drive would begin with a 10-yard bootleg by QB Dennis followed by a seven-yard completion to Matt Clarke. Later a 27-yard reception to the Mustang 11 by Corbett set up the opportunity. Two plays later Corbett ran over from six on a second effort after getting hit twice at the two-yard line for a 27-14 lead that held up to halftime.

Billy Levy got a good return on the second half kickoff reaching midfield. A personal foul penalty moved the ball to the Brick 35-yard line. On the fourth play of the series QB Dennis hooked up with Corbett with an eleven-yard touchdown pass. The final Wave tally came in the fourth quarter with 10:19 remaining on the clock. Once again the touchdown came on a Dennis pass to Corbett, this time for five yards on a fourth down play.

Friday evening the Wave hosts the Middletown North Lions for the first round of the state playoffs. Looking ahead just a reminder that the annual Thanksgiving Day game will be played in Long Branch. This will be the 96th meeting; LB leads the series 61-31 with 3 games ending.

Niles Montgomery (15) pulls in a pass under pressure.