Well it was evident early on Saturday morning that the boys lacrosse team at Shore Regional High School is one of the best overall squads in the Shore Conference. 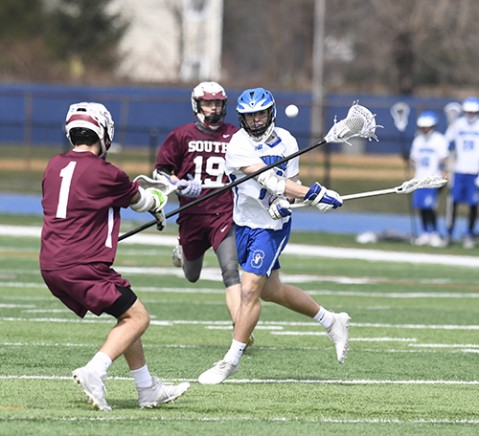 He had only one goal in the win over Toms River South, but it was a rocket fired by Terry Carlstrom (24) of Shore Regional.

Shore which plays in the B South division of the Shore Conference is currently undefeated at 3-0 with the thumping 15-1 victory over Toms River South. The Blue Devils scored often and shared the ball, while their defense was aggressive and only allowed one ball to slip past goalkeeper Scott Sirianni.

Assisting on two goals was Justin Murphy, and Nick Crochet had one assist in the victory

. The Devils played two goalkeepers in the game. Sirianni had four saves and allowed the one goal. Nico Katch had two saves when in the game.

Currently Shore and Lacey are both 3-0 overall in the B South. Division games Lacey is 2-0, while Shore is 1-0. Point Pleasant Boro is in third at 2-0 in the division and 3-2 overall. They are followed by St. Rose, Mater Dei, Barnegat, Donovan Catholic, and Ranney.