Long Branch — Voyager One, the new production at NJ Rep, written by Jared Michael Delaney and directed by Evan Bergman, takes place in two different times. Half the scenes are set in the future, thousands of years from now, in a space craft where an entity (Daven Ralston) is just emerging into consciousness. Is she a woman? An alien? A robot, an android, a cyborg, or none of the above? 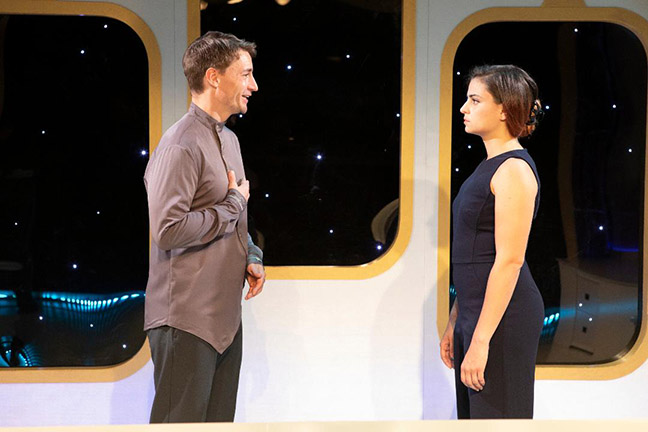 She is greeted by an AI voiced by Mare Akana in tones both magisterial and mellow, like Frances McDormand as the voice of God on Amazon Prime’s Good Omens. The only other being on board is a man named Ceygan (pronounced Sagan), whose social skills may be rusty after 10 years with no one but the AI’s voice for companionship. Ceygan (Joe Carlson) has been waiting for the mysterious lady to come out of suspended animation, hoping she holds the answer to the future of mankind.

Back in the distant past of the 1970s, two attractive young people, Carl (see! Ceygan=Carl Sagan) and Sarah, are curating artifacts to be part of the Golden Record, which was sent into space on Voyager One bearing samples of Earth’s images and sounds, including spoken greetings in 55 languages but only one rock song, (Johnny B. Goode, by Chuck Berry).

Carl and Sarah (Joe Carlson and Daven Ralston again), seem less interested in their work than in flirtatious banter about the injustice of not including the Beatles on the Golden Record because EMI won’t give permission to use Here Comes the Sun (or even Across the Universe).

In some ways, 50 years ago seems as alien as thousands of years hence, between Carl’s puzzlement at gender neutral language and the sight of a movie projector and 45rpm records. Also, we are a long way from #MeToo.

The transitions between past and future are clever and smooth, as the doors which show the stars outside the spaceship close to change the space to a basement room at NASA, and the actors change from their streamlined futuristic gear to regular clothing (Ralston literally lets her hair down).

Twentieth century Carl is smoother and more outgoing than future Ceygan, and twentieth century Sarah is a bundle of animation as opposed to the future entity’s lack of expression and literal mindedness. Two talented actors bring four separate characters to life.

Since Voyager One is science fiction, there are some nifty visual and sound effects associated with the genre.

There are mysteries on stage whose solution I don’t want to spoil. Who or what is the mystery lady? Does she hold the key to humanity’s future? What is the connection, if any, between the two stories?

Here are some other mysteries that occurred to me. Has the AI achieved self awareness? And how many bars of Here Comes the Sun were Carlson and Ralston allowed to sing before EMI got after them?