At the September 11 session of the Eatontown Borough Council, Christine Caruso was sworn in to the governing body. Caruso is replacing the recently departed Jen Sherrod, who resigned last month. 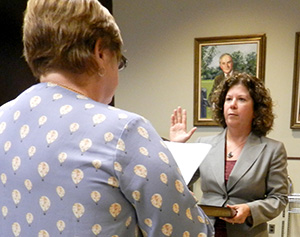 Caruso, who was chosen to fill the seat by the county Democratic committee, is also running for council in the November elections.

The swearing in was not without some discussion beforehand. Specifically, Caruso ran for council a year ago and lost. Mayor Anthony Talerico, while not critical of Caruso’s appointment per se, questioned the wisdom of appointing someone who recently lost a council election to a council seat.

He cited the ordinance that was passed a couple years ago, in which a council member who runs for re-election and loses is then barred from serving on the borough’s Planning Board for one year. The ordinance was created in part to remove any impropriety, based on the chance that any council member may have helped craft legislation that would be a benefit to the board.

Councilwoman Jasmine Story said the brand new council member would have to vacate the seat first. “She’s never been on council,” Story said of Caruso — who at that point had not even been sworn in yet.

Councilwoman Tonya Rivera compared the issue to looking at two pieces of fruit. “They’re both fruit but they are two different kinds of fruit,” she commented. 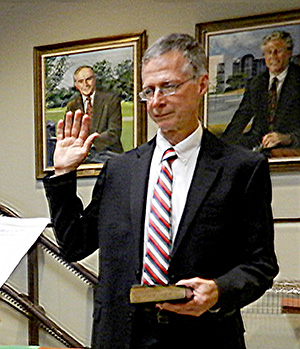 Councilman Al Baginsky is sworn in as council president, replacing Patti May Kelly, who resigned in August.

Rivera also said that there are many ways you can lose an election. “When you lose a re-election, she said, “that’s a commentary on the job you did.”

Once Caruso finally sat up on the dais, she was gracious in her comments.

“I just want to thank the council members for the display of faith in me. I’m very humbled by the nomination… this council has tackled some pretty challenging issues over the last few months and I think its resulting in some good things for Eatontown. I’m happy to be on council. Thank you.”