$37 million worth of sand coming to area

By Neil Schulman
Long Branch — Work is about to start on a $37.4 million beach replenishment in Monmouth Beach, Sea Bright and Long Branch.
The federal government is picking up about two thirds of the costs, with the state and municipalities picking up the remainder. Each of the three communities will be paying about $1 million, with grants from Monmouth County covering about half their costs. 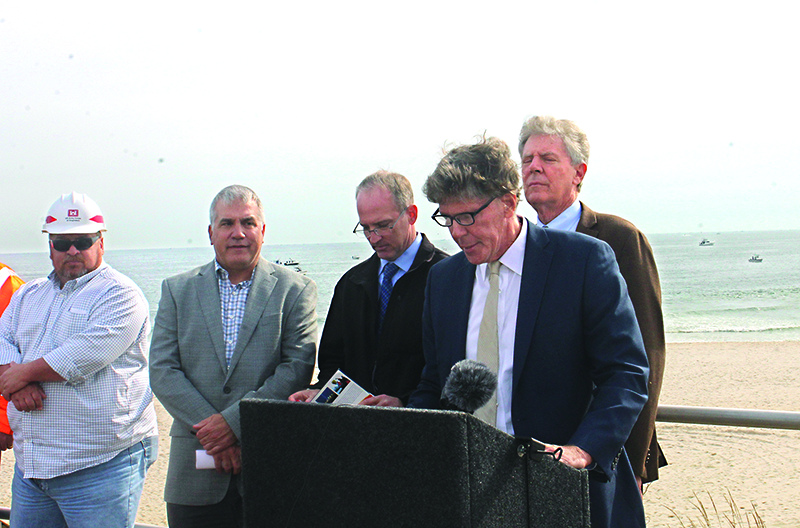 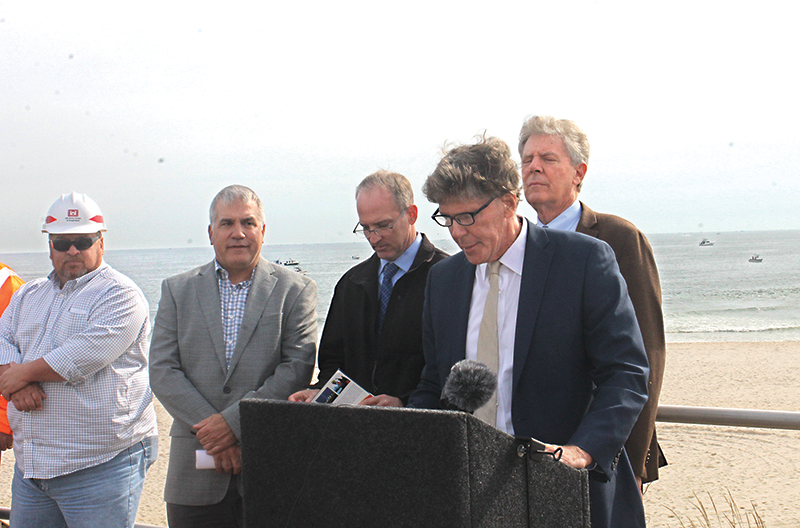 Long Branch Mayor John Pallone discusses what beach replenishment will mean to the city at the Brighton Avenue beach entrance, one of the sections that will benefit from it. Behind him are, l-r, a worker involved in the project, Bill Dixon, Director NJDEP, Division of Coastal Engineering, Army Corps of Engineers project manager Jason Shea, and Congressman Frank Pallone.

Congressman Frank Pallone was at the Brighton Avenue beach, the northern end of the Long Branch replenishment project area on Friday, to announce the details. He was joined by Long Branch officials, local Assemblymembers, NJ Department of Environmental officials, and representatives from the Army Corps of Engineers, which oversees the project.

The Army Corps will start moving equipment into place in November. Sand replenishment is expected to start in Sea Bright and Monmouth Beach in December, and in Long Branch this February.

In Sea Bright, sand will be placed from Island View Way north to the Tradewinds. In Monmouth Beach, replenishment is from the Bathing Pavilion near Valentine Street to Cottage Road. And in Long Branch, is goes from the West End Beach to Sycamore Avenue in Elberon.

Congressman Pallone said that the beach replenishment may look expensive, but it’s worthwhile.

“Each time I talk about beach replenishment – it’s been 30 years now – I have to stress it saves money,” he said.

Local towns like the extra sand in part because it makes beaches more attractive. Mayor John Pallone noted that the city had a “record summer in beach revenue” this year. But Congressman Pallone said the Army Corps of Engineers is really looking at the likelihood of major storms and how the sand serves as a buffer for that, and tourism is just a welcome side effect.

“There’s a very tough cost benefit analysis,” he said. A major hurricane or severe nor’easter can “add up to millions or even billions of damage.” If the storm just washes away a buffer of sand, it’s much cheaper in the long run.

This replenishment marks a milestone of sorts; it’s the first project in the area that is not part of the emergency sand brought in after Superstorm Sandy, but instead for the routine maintenance of the shoreline.

Jason Shea, project manager, from the Army Corps of Engineers, said that there would be a total of 1.6 million cubic yards of sand brought in to the area.

“This project will continue to provide the much needed beach erosion control,” he said.

The average period of time between replenishments is six years, but there’s a lot of variation depending on the amount of erosion.

The total cost is $37.4 million. The federal government pays for 65% of the project, with the state paying three-quarters of the remaining cost, and the individual towns picking up the remainder, the exact amount they pay for depending on the amount of sand they’re getting, paying about nine cents for each dollar spent.

In Long Branch, Monmouth Beach and Sea Bright, that’s all roughly $1 million dollars, give or take. But Mayor John Pallone said that Monmouth County was helping to pay a portion of the costs. Long Branch’s final total part of the bill will be $600,000 to $650,000, he said.