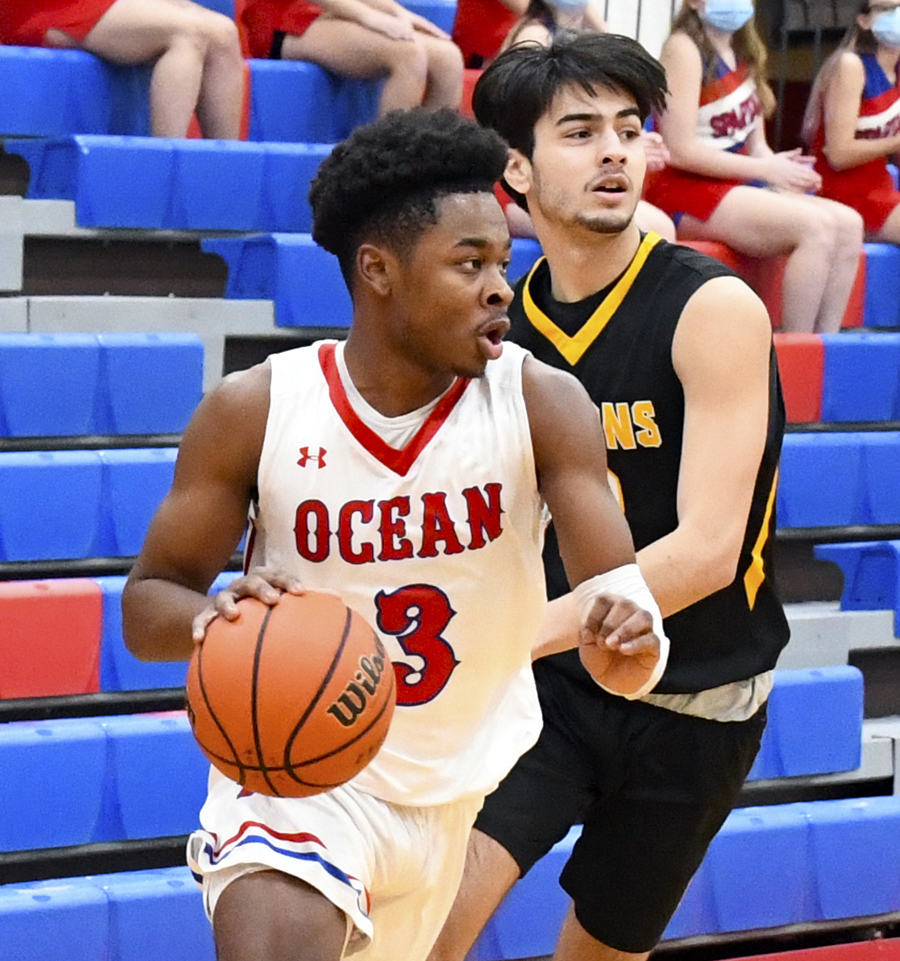 By Walter J. O’Neill, Jr
February 12, 2021
Governor Phil Murphy signed an executive order on February 12 allowing parents to attend indoor sporting events. Each player is only allowed two tickets per-game, and names must be provided to the school’s athletic director in advance.

Friday night was the first time during this pandemic that spectators were present in the gym at Ocean Township High School for the boys varsity basketball game against Monmouth Regional.

“Parents must have notified my office in advance that they will be attending. They must enter through the doors under the fitness center, have their temperature checked and maintain social distancing in the stands,” said Rusty Todd, athletic director at Ocean . He added that as soon as the game is over, parents must exit through a different door and wait outside for their children.

Just two days before the game, Monmouth and Ocean had faced each other in Tinton Falls, where the Falcons defeated the Spartans 62-40. Entering his fourth season as the Falcons head coach is Jeff Sfraga, whose team finished 4-18 last year. “We had a rough start to our season as our first four games were canceled as a result of COVID. I’m just happy for these players that they get a chance to play,” said Sfraga.

February 10, was the first game for the Falcons and they had beat the Spartans by 22 points. Kiran Desai and AJ Po both scored 14 points in the victory. “Considering we got off to a slow start as compared to other schools, we did very well that night,” added Sfraga.

Ryan Pringle, who is in his rookie season as head coach of the Spartans was not worried about the 22-point loss two days earlier. “That game is behind us and we all know that we can play better than we did that night,” said Pringle.

Well, it was a great night of hoops for those parents who were allowed to watch live. The first quarter had Ocean taking a 16-13 advantage over the Falcons. Jamal Cetoute, senior guard for the Spartans, scored nine of his game-high 19 points in those first eight minutes. Evan Peters, another senior guard, had five of his game-high 14 points.

For the Falcons, AJ Po scored five of his 20 game-high points in the first quarter. Desai had four of his game-high 12, while Jake Marcincak and Gerald Wiggins both scored two points.

Going into the halftime break, Ocean had a 25-17 lead on Monmouth Regional.
The second half was an offensive explosion for both schools. Monmouth Regional outscored Ocean 14-11 in the third quarter. Po scored five, Aiden Denton hit a three, while Brian Yadlon, Desai, and Marcincak all had two points.

Matt Shaw was the Spartan powerhouse in the third quarter. He scored seven of his game-high 14 points. Aidan Tisony and Peters each had a basket in the first eight minutes of the second half.

Going into the fourth and final quarter of regulation play, Ocean had a 36-31 lead over Monmouth Regional. Both teams played their best quarter of basketball to end the game. The Spartans added 26 points to their total. Cetoute had 10 of those, Peters scored seven and Shaw had five.

Monmouth Regional was led Po who also scored 10 points in those final eight minutes. Desai scored four, Denton had three while Kevin Talesford and Wiggins each had two points to finish the game.

Like two days before, the winner had 62 points. However, this time the winner was Ocean Township while the Falcons finished with 52.

Interesting note that on February 13, the Falcons played their third game of the season beating Red Bank Regional. What makes it so attention-grabbing is that they won with 62 points.