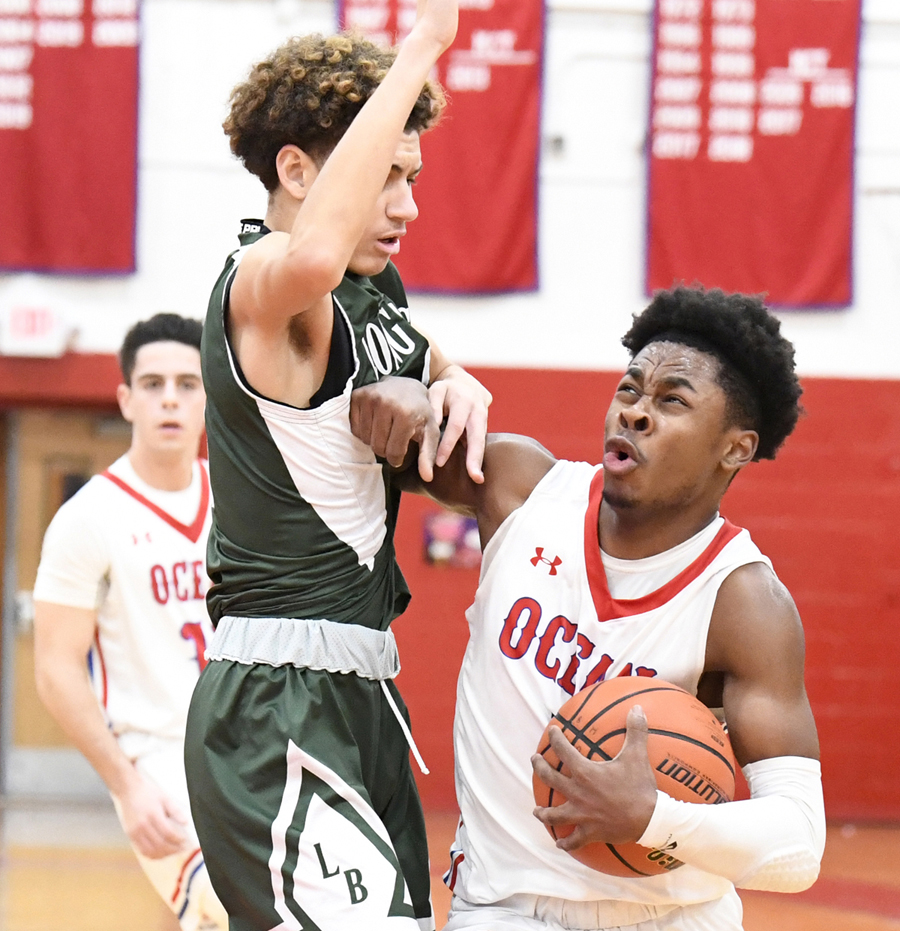 By Walter J. O’Neill, Jr
February 13, 2021
Saturday morning was the battle of rookie head coaches at Ocean Township High School. The Spartans, under first-year head coach Ryan Pringle hosted the Green Wave of Long Branch where Darnell Tyler is in his first year as head coach.

Tyler took over a prog ram that had only one win in 22 games last season. Long Branch finished 0-14 in the Class A North last year, probably the worst record in Wave history. Finishing with the worst record in the Shore Conference, Long Branch decided to take a new approach this year, and according to Green Wave Athletic Director Jason Corley, the man selected to lead the team was Tyler.

Click here for vaccine updates and other Long Branch news!

Back in 1997 and 1998 when Long Branch won back-to-back NJSIAA state titles, Tyler was an all-star standout in the paint. He is best known as “Six” because he stands 6’9” tall. After high school he played at Manhattan College.

Long Branch lost five players to graduation and one transferred to Donovan Catholic High School. Tyler has a team that is loaded with athletic ability, but lacks the big man, as their tallest player is Mason Alexander, who is 6’2”.

Visit ACE Hardware for de-icer and much more

As a result of the pandemic and canceled games Long Branch has missed a few. As they entered the gym in Ocean on Saturday morning they were still looking for their first win of 2021. Their first two games were 53-39 and 85-35 losses to Red Bank Catholic. They then lost 52-40 to Freehold Borough and 60-49 loss to Matawan.

Pringle has the responsibility to take a Spartan team that finished 14-11 last year and try and improve upon that record. However, he lost four players to graduation, one of which was a 1,000 point plus scorer in Jack Miller. Transferring out of Ocean to Pennington was junior Cory Miller. He is also the little brother to Jack, and combined the two Millers were responsible for 30 points per-game last year.

This season the Spartans have size, speed and an aggressive defense. However, with the pandemic the Shore Conference has rearranged schools into Pods, with Ocean in the toughest. They opened with three consecutive losses. Raritan beat them 51-40, Keyport won 58-31, and Pinelands took a 37-29 victory. Ocean earned their first victory with a 50-34 win over Henry Hudson and then a 62-40 loss to Monmouth Regional. The night before the Long Branch game the Spartans played Monmouth Regional for a second time and beat them 62-52.

Three of the four quarters played between Long Branch and Ocean were very tight with the biggest gap being only two points between them. It was the third quarter of the game that determined the winner, and that was when Ocean outscored the Wave 14-9.

In the third quarter Reif Birzin hit two, long three-point shots for Ocean. Those were the only points he scored in the game but he led the Spartans during those eight minutes. Matt Shaw had five of his game-high 11 in the third quarter. Shaw also finished with six rebounds. Another big impact on the boards for Ocean was senior 6’4”Rusty Todd who pulled down 11 rebounds and scored four points. Evan Peters and Jamal Cetoute, both senior guards, finished with eight points. With the win, Ocean improved to 3-4 on the season.

Leading all Long Branch players in scoring was Christian Rodriguez with 12 points. He is the senior point guard and directs the offense. Josiah Evans finished with seven points and Bruce Gooding had five. With the loss the Wave are 0-5 for 2021.

You can watch the second and fourth quarters of the Long Branch at Ocean on our Facebook page: www.Facebook.com/TheLinkNews

Additional photos will be posted at
www.Facebook.com/TheLinkSports