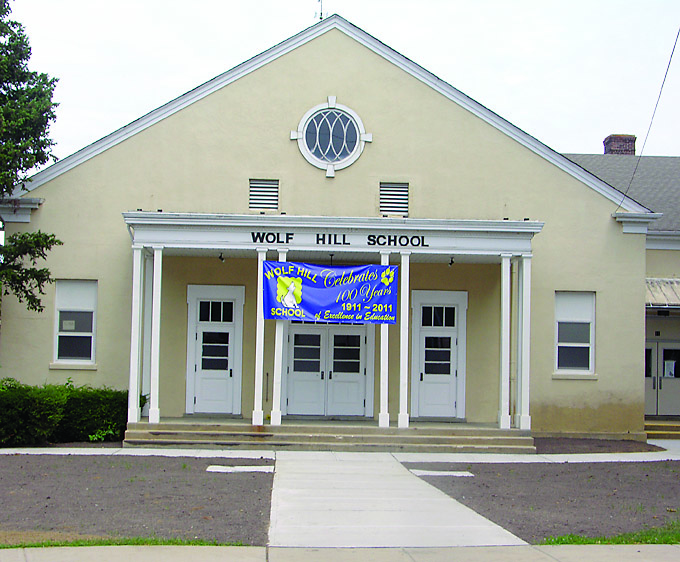 Originally published July 28, 2011
﻿By Neil Schulman
Oceanport — Work on Wolf Hill School is going well, and should be completed by the end of summer, officials reported at the July 20 Board of Education meeting.
The money for the repairs and renovations is coming, in part, from a state R.O.D. (regular operating district) grant. Dr. Jack DeTalvo, a former superintendent for several districts and also a former employee of Hill International Construction, helped Oceanport obtain the grant and has been helping to monitor the work.
“It’s going quick. The front’s done. The back will probably be started this week,” he said.

Work on the front of the school, which includes patching curbs and sidewalks, has been completed. DeTalvo said in the back, the parking lot will be paved and extended, removing some bamboo that’s growing on the edges.

The work also aims to address a problem in the cafeteria. When there are heavy rains, water flows into it. Downspouts have been installed to direct water away from that part of the building. DeTalvo said that there’s no guarantee that this will work, though it helps with leaks in “90 percent or better of the cases.”

DeTalvo noted that Wolf Hill still has an operating septic system, which hasn’t been emptied for 20 years. However, because it is working, he advises leaving it alone until something happens.

The Board voted earlier in the week to refund slightly over $31,000 to taxpayers.

Two weeks ago, the state announced it would give extra aid to all districts in the state. Oceanport school officials decided to return it to taxpayers.

﻿ “We’d submitted a budget (to voters) that did not include the roughly $31,000,” said Superintendent Andrew Orefice. As a result, they believed the right thing was to return the funds to the public.

Under the funding formula, Sea Bright, which is part of the Oceanport district, will receive 12 percent, while Oceanport taxpayers will get the remainder.
Board President Kelly McGowan said that she was aware the effect would be a “token relief,” but it was the right thing to do.

“We are all taxpayers of Oceanport as well,” she said.

Mike MacStudy, President of the Oceanport Baseball Association, gave a presentation to the board on ways to improve the Maple Place fields, which he said have major problems.

The association has been working with the board and consultants to see what can be done.

At the moment, the field is in bad condition, he said. The grading is bad, which causes several problems.

For example, there is a lip where the infield ends, which is a safety issue when a ball is rolling. It also means that the infield really retains water.

“If there’s rain Monday, and the game’s scheduled for Friday, we’re getting washed out,” MacStudy said.

Consultants have recommended getting new, specially formulated soil. Not only would this improve the grading, but this soil would be more resistant to crab grass.

MacStudy gave the board several proposals to examine.

Board member Tom Walsh said that the problems were severe.
“That field in the back is no longer a field. It is a weed patch,” he said.