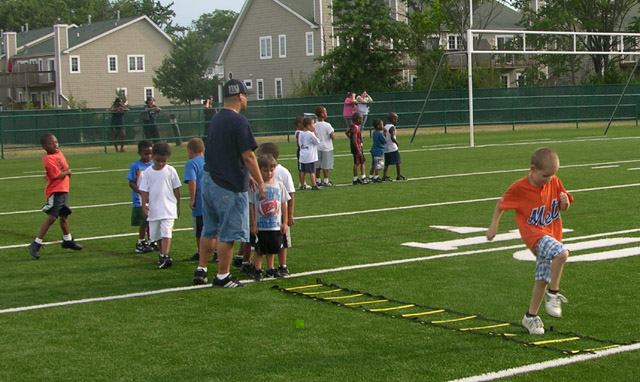 By Neil Schulman
Long Branch — The football and cheer program in the city has a new name, and a new outlook. Organizers want to show that it’s about more than just sports, and want to get the whole city involved, building on recent successes.
This year the Long Branch group voted to leave the Pop Warner program and become Long Branch Youth Football and Cheer, part of the American Youth Football and Cheer.
“The teams from the Jersey Shore all joined a new league, with the exception of six,” said President Allan Menkin. Joining the American Youth league allows city children more opportunities to play nearby teams, he said.
The new league makes it easier to get into championships, but the real focus is on giving children an experience that promotes academic and social work as well as athletics.

﻿ “We would like to get there, but that’s not our ultimate goal,” Menkin said.

The name isn’t the only thing that’s changed. The Long Branch Youth Football and Cheer Board, a combination of longtime members and some new faces, wants to increase community involvement.

Many people mistakenly assume that because the group practices at Manahassett Creek Park, it’s mostly for North Long Branch residents. That’s not the case, Menkin said. “All the kids in Long Branch should be a part of it.”

Smith said he wished he’d gotten involved earlier, but wasn’t aware he could have. “I would have been happy to help out, but because my son wasn’t in the program, I had no idea,” he said.
Tracy Craig, fundraising chair, said that businesses had been supporting the group. Many had donated water, sports drinks or gift cards.

For the first time this year, during practices they have opened the refreshment stands to help raise money. One of their goals is to get new uniforms for the kids this year.

More children have become involved, which is good for the group. Smith said that for the first time this year, they’ve been able to have a 7-year-old team.

The group encourages more than football and cheerleading. There’s a strong academic component. Last year, for the first time ever, three Long Branch players made it to the Scholastic All American held in Chicago, Menkin said. To be chosen, players must not only exhibit athletic talent, but academic ability and community involvement.

“We were so pleased to send three athletes from our city,” he said.

There have also been programs for the community as well. Last year, kids in the flag program were taken to the Prudential Center, in a fundraiser for a local boy who needed bone marrow.
This year, some of the cheerleaders will be visiting nursing homes to bring cheer to the residents.

The new board welcomes interested children, and also welcomes volunteers and those who wish to make donations.

“Come take an opportunity to see what’s going on with the new Long Branch Football and Cheer,” said Smith. “This isn’t just during the football season. This will be year round.”