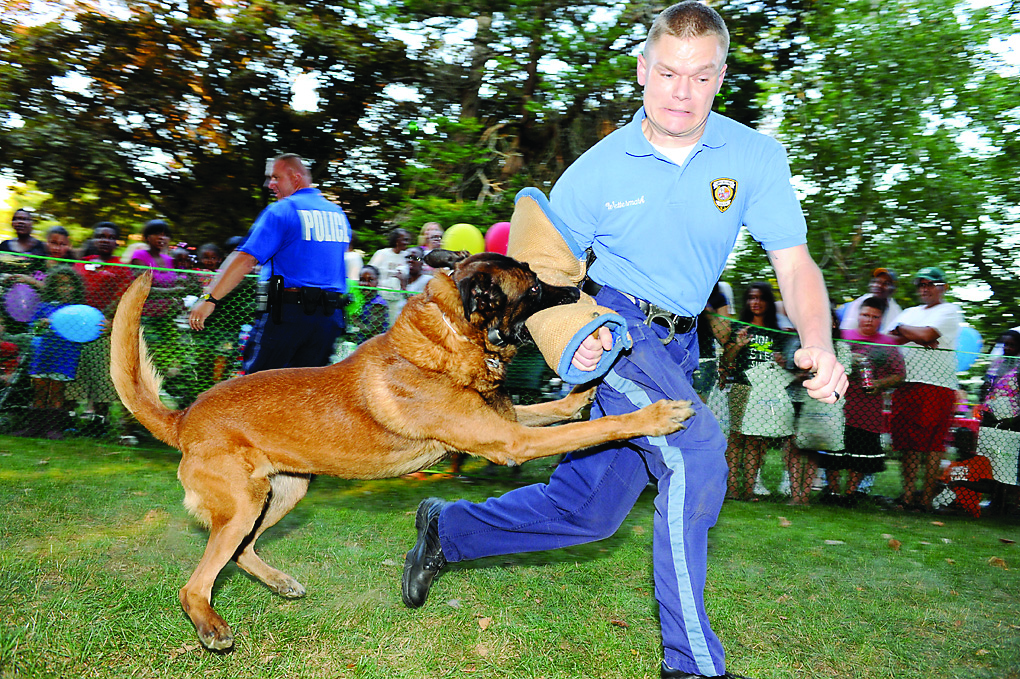 Long Branch – ﻿ It was Long Branch’s 16th annual National Night Out on Tuesday, held in Slocum Park next to the Library on Broadway. The park was crowded with hundreds of people showing up for free information, prizes, food and, for some, a frightening demonstration by the Long Branch Police Department’s K-9 Unit.
Officers Fred Cistaro and Eric Whittermark demonstrated how each dog responds to commands whether it is to attack or back off. Bala is a six-year-old bomb dog and patrol dog that can sense up to 22 types of explosives. Doyan, a Belgan Malinois, sniffs out drugs and is a patrol dog.
National Night Out began in 1984, a brain child of National Association of Town Watches Executive Director Matt Peskin. He believed a hgih profile event by a national crime prevention event would help promote safety awareness and improve neighborhoods. Today, more than 37 million people in over 15,000 communities take part in National Night Out events.

While the tradition is to leave porch lights on, it has grown in many communities, including Long Branch, to bring together police, civic groups and others, offering visitors free food, advice and giveaways.
This is the 16th annual National Night Out celebration in Long Branch. The evening is organized by United Neighbors Inc., led by Ronald Cox. The Long Branch police, fire department, office of public works, and numerous sponsors and non-profits are also on hand to help out and join in the night to take back the streets.