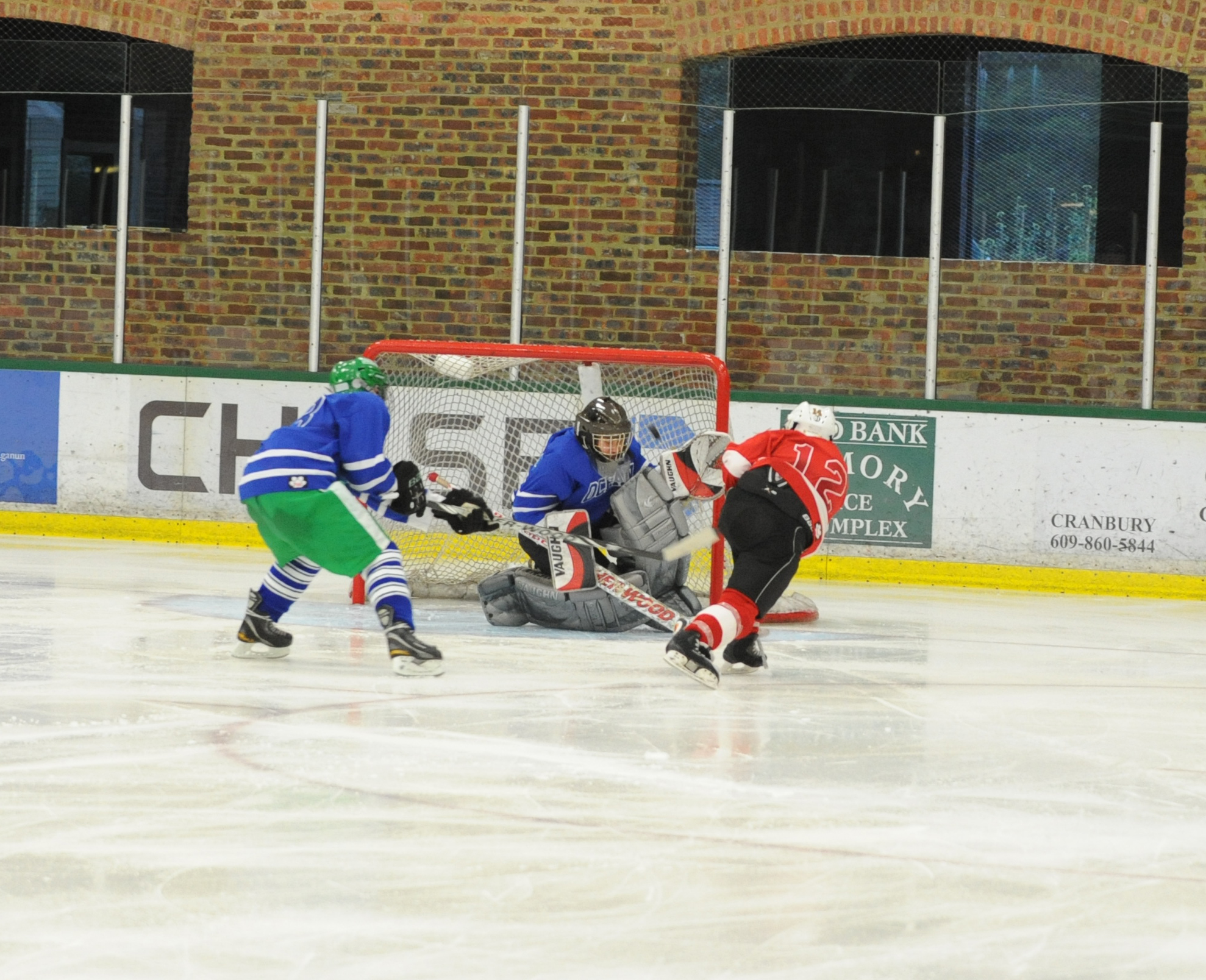 Getting one of the three goals scored by Monmouth County in the 5-3 loss to Ocean County was Patrick Dwyer (12). Dwyer, of RBC, also received the team’s Most Valuable Player Award. 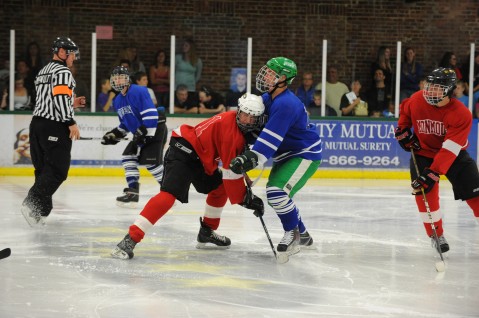 By Walter J. O’Neill, Jr.
Red Bank – Temperatures outside on Sunday afternoon hovered around 95 degrees, however inside the Red Bank Armory, it was a cool way to spend an August evening.
The best high school ice hockey players from the Shore Conference were on hand for the 14th Annual Dowd All-Star Game. Players from Ocean County had the blue uniforms while Monmouth County was in red.
Jim Dowd, who graduated from Brick High School, led his Dragons to a 1985-1986 state title. During his senior year, he broke the national scholastic scoring record, finishing with a four year total of 375 points, 189 goals, and 186 assists. He was an eighth round draft pick of the NJ Devils, but went to Lake Superior State University.
After college Dowd spent 17 seasons in the National Hockey League, playing for ten different teams. In 1995 he was part of the NJ Devils Stanley Cup Champions. Dowd has been a big supporter of scholastic and development ice hockey program for years. One of his biggest accomplishments off the ice was the creation of the Jim Dowd’s Shoot for the Stars Foundation.
The local players on the Monmouth County All-Star Team this year were Gavin Gatta, goalie, Jesse Deatherage, defense, Bryan Gaburo, forward, and Patrich Dwyer, forward, all of Red Bank Catholic. Cory Zimmel from Ocean Township High School represented the Spartans as a forward. The coaching staff of St. Rose High School was picked to direct the Monmouth County squad. Pete O’Neill was head coach assisted by Dudley Delhagen and Jamie Liguori.
The first period was a fast paced exciting game. Monmouth County took an early 1-0 lead on a goal scored by Howell’s Eddie Pyskaty. Ocean County came on strong near the end of the period and scored a goal to even the game. Monmouth had one last chance to take the lead into the break when Dwyer, one of the fastest guys on skates, broke away and had a shot on Eddie Rafferty, the Brick goalie, who made a great save. “I was seeing the puck real well,” said Rafferty. “I thought I was starting the third period, but coach told me I was going out first. I think it helped me as I did not have to think about the whole game.”
The second period Monmouth County changed goalies, going between the pipes was Gatta. Unfortunately for Gatta and Monmouth County their opponents came out red hot and aggressive taking a 4-2 lead. With 3:02 left in the period O’Neill made a switch in goal. The only second period goal by Monmouth was put in by Danny Malafronte, a forward from CBA.
The last goal scored by Monmouth County was put in by Dwyer. With less than a minute to play O’Neill pulled his goalkeeper adding an extra guy on the ice hoping for one last goal to even the score. However, Pat Kearns, a defensive player from Brick, just wanted to clear the puck hitting it off the side wall which sent it sliding into an empty Monmouth goal. Ocean won the game 5-3 and had 44-36 shots on goal advantage over Monmouth County.
Taking home the Most Valuable Player Awards for the Monmouth County side were Malafronte of CBA and Dwyer of Red Bank Catholic. Dowd stated that all the proceeds from the event would go to the Food Bank of Monmouth and Ocean Counties.
For additional photos of this game please visit our Facebook page at: http://on.fb.me/qMsUWs or O’Neill Photography at http://bit.ly/mSKNZu