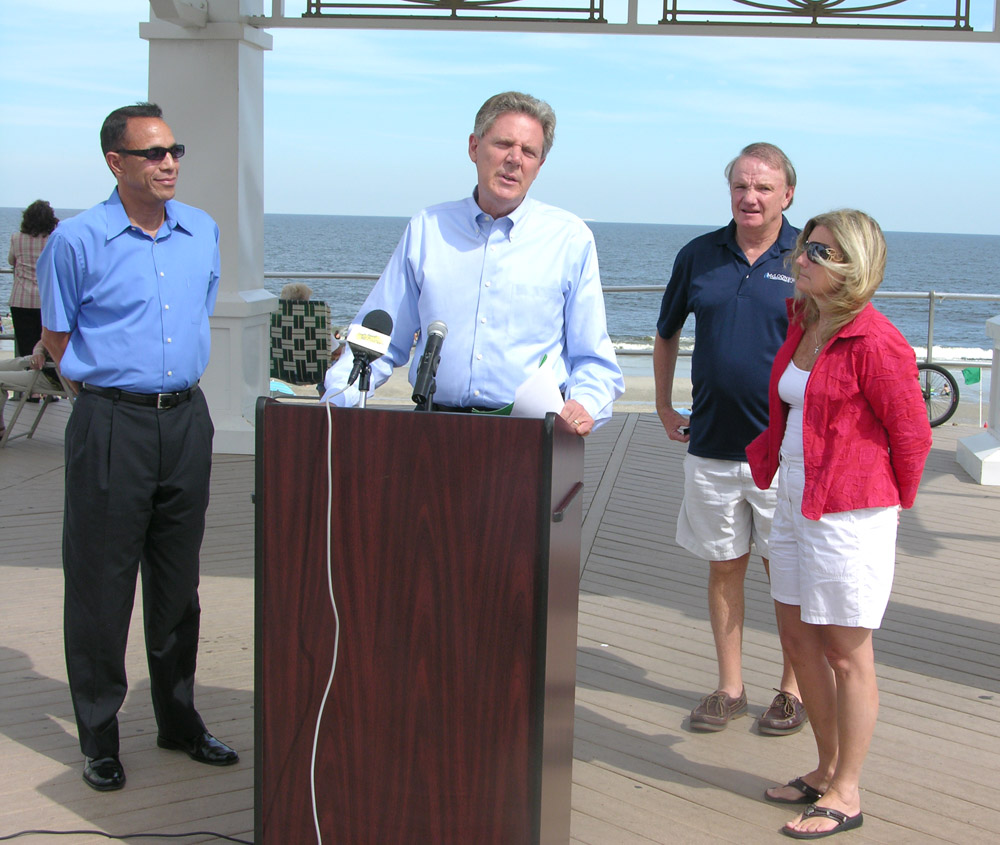 By Neil Schulman
Long Branch — Hurricane Irene is over, the streets are cleaner, and people are once again going to shore businesses. However, the economic impact of the storm will continue to be felt for a while. 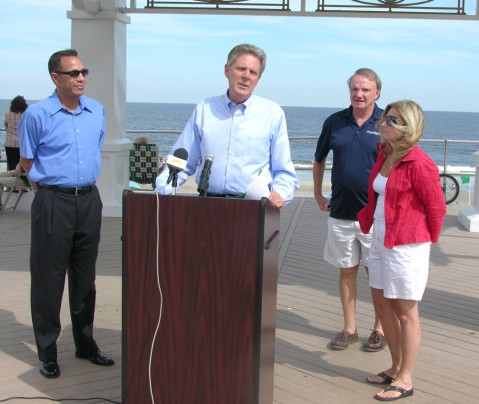 On Sept. 1, Congressman Frank Pallone held a press conference at Pier Village, joined by mayors, officials and businessmen from nearby communities, saying that businesses had lost money when they had to close for the storm, municipalities face expenses from cleanups and the extra manpower needed, and that sand lost needed to be replenished to continue to protect shore towns.

Before the Army Corps of Engineers adds sand to a beach, “We do a strict cost benefit analysis,” Pallone said. The studies show that the cost of the project is less than the damage a storm would otherwise inflict.
Several speakers noted that the expanded beaches had proven to be a big help, noting that Hurricane Irene did less damage, locally, than the 1992 nor’easter.

City Administrator Howard Woolley said the storm nearly 20 years ago had taken a divot out of the shoreline that cost between $1.5 and $2 million to repair. “The money we invested in the sand was much less.”

This time, “we did not lose property, except in one incident south of Takanassee Lake, where there has been no sand placed,” Woolley said.
And local restaurateur Tim McLoone said that in Sea Bright, the road to his restaurant used to flood when there was even a drizzle.

“That road has not been closed once since beach replenishment began, except for a storm like this.”

Pallone also said the government was working to get FEMA (Federal Emergency Management Agency) aid to communities as soon as possible, though there was some resistance to this.

“Some statements were being made by the Republican whip, and even a congressman from New Jersey,” Pallone said. They want to treat the appropriation for the storm like any other appropriation, finding expenses to cut elsewhere in the budget and going through the normal process.

“I’m very opposed to this,” he said, noting that would mean the money might not be available for a year or more, when many communities need it now for the unexpected expenses.

McLoone said the storm had also had an impact on businesses. He estimated that his three restaurants, all near the water, normally would have done $300,000 in business over a summer weekend. He said he’s worried how this will affect his employees who depend on tips, normally lucrative at this time of year.

Ed Johnson, Mayor of Asbury Park, said that it was important to get things back and running. Because a third of the country’s population lives within a few hours of our beaches, “The Jersey Shore’s economic impact on the U.S. is significant,” he said.