City reflects on origins of Veterans Day, and needs of troops today

Salvatore looks to light up the future 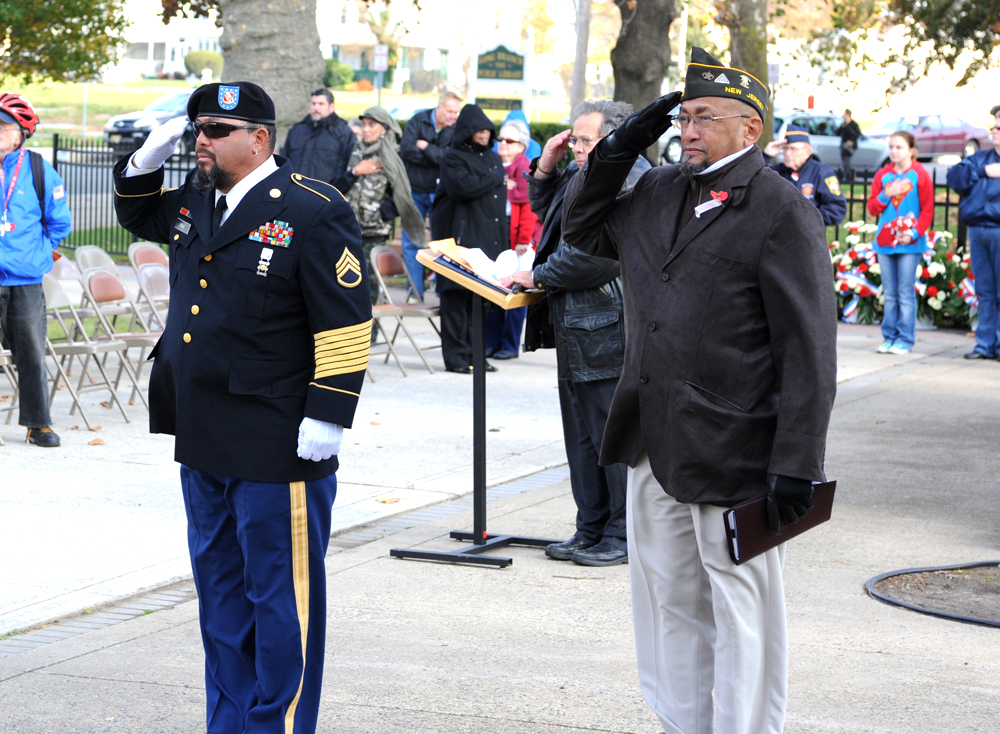 By Walter J. O’Neill, Jr.
Long Branch — On June 28, 1919, the treaty of Versailles was signed ending what was then called “The Great War,” which we now refer to as World War I. However, the fighting had stopped seven months earlier when an armistice was signed that went into effect on the eleventh hour of the eleventh day of the eleventh month.

November 11, 1918 is therefor generally regarded as the day the “the war to end all wars” ended.
One year later, President Wilson proclaimed November 11 as the first commemoration of Armistice Day. In 1938, Congress officially made it a national holiday. Sixteen years later, on June 1, 1954, Congress amended the name to “Veterans Day.”
Adam Schneider, Mayor of Long Branch, is a history buff and takes the time on Veterans Day to remind those who gather outside city hall for the annual celebration of the great sacrifices made during “The Great War.”
This year Schneider read the obituary of Claude Choules, who served in the British Royal Navy, and died on May 11, 2011 at 110. What was a little eerie was that Schneider’s speech ended at 11:11 a.m. on November 11, 2011, and it was not planned that way.
Part of the city’s commemoration of Veterans Day is an essay contest with the Long Branch Public Schools. Three winners are selected and asked to read their award winning essays on Veterans Day.
Ravin Brown is a fifth grade student at the Amerigo A. Anastasia School. She spoke about what pops into a student’s mind when they talk about Veterans Day and what they can do to show support.
“You can join a site and ‘adopt a solider,’ send a care package, send money, email them, become pen pals, send clothes, send thank you notes or cards, or take a veteran to school day,” said Brown. “Your life could become so fascinating having a veteran as a friend. Supporting veterans is a good thing, after all they risk their lives for your freedom.”
Long Branch Middle School student Steven Vieira, an eighth grader, said our government, the most powerful in the world, has laws that grant females maternity leave with pay allowances.
“I believe there should be a similar program for reserve soldiers,” said Vieira. “For example, a sort of ‘service leave’ that pays soldiers a decent portion of their salary so that their families can be supported during their time away.”
He added that if we can pay mothers to care for the future leaders of our country, why can’t we pay the people making sure there is a future leader.
“In and of itself, the physical and emotional strain placed on members of our armed forces during a time of war warrants the utmost appreciation,” said Lauren Mandall, a senior at the Long Branch High School. “We send our sons, daughters, fathers, mothers, sisters and brothers to war and ask them to sacrifice that which is most important to them. For this service we pay many of them less than $18,000 per-year, a salary that is not nearly enough to support a family.”
Mandall went on to say that many Americans fail to realize that military families as a whole, not just the serviceman, take on the burden of serving our country. Americans need to do more for our veterans and our active duty personnel, and hopefully these future leaders will be able to address those concerns.