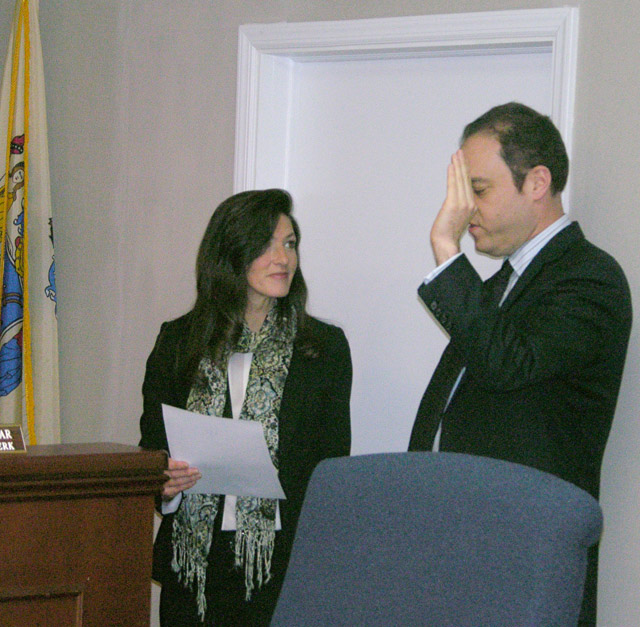 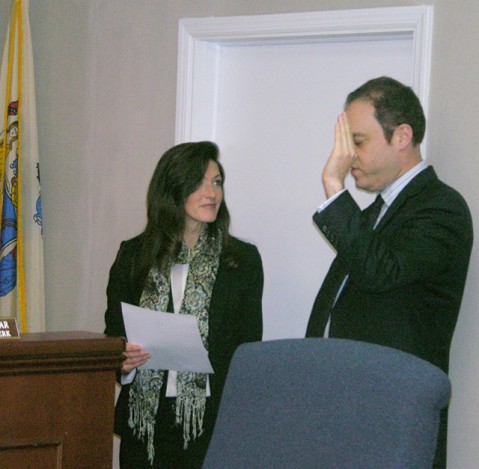 At the Feb. 7 Borough Council meeting, Leckstein was approved unanimously by the other five members of council. He will take the seat vacated by Mayor Dina Long when she assumed her new office at the start of this year.
Leckstein, who earned a law degree from Penn State in 1998, has lived in the borough since 2000. He has provided legal council to municipal planning and zoning boards, and worked with local condominum associations on how to govern their community.
He’ll be using that experience on council. Minutes after he took the oath of office, Councilman C. Read Murphy asked him to take over as the council liaison to the Sea Bright Planning Board.
Leckstein will be the lone Democrat serving on council, though Long is also a Democrat. The other five members of the governing body are Republicans.
A larger-than-normal crowd attended to watch Leckstein sworn in, including ex-Mayor Maria Fernandes.

Great firetruck, great price
At the meeting, council also approved a resolution hiring a company to inspect a new firetruck before the borough takes possession of it.
Councilman William Keeler said that they had used the company in the past, and they did good work. The cost of the inspection would be $1,400, plus some additional expenses for travel.
“Members of the fire company don’t think that’s necessary,” he noted. The fire truck was a custom job, and members have been going down to supervise the construction themselves. But given the expense of the project, Keeler believe the extra inspection is well worth it.
“My feeling is it’s a $385,000 investment.”
Councilman Murphy said that he went down to see the construction, and learned that the borough had gotten a great deal. While there, he saw the plant assembling a fleet of firetrucks for Philadelphia. He asked what that cost, thinking it might be cheaper because it was in bulk.
“They’re paying about $21,000 more than you guys,” he said.
That’s not the only good buy the Sea Bright Fire Department has made. A few years ago, when it spent $580,000 on a ladder truck, many worried about the price tag. But Fair Haven’s recent truck, which doesn’t even have a modern-style ladder, cost more than $700,000.