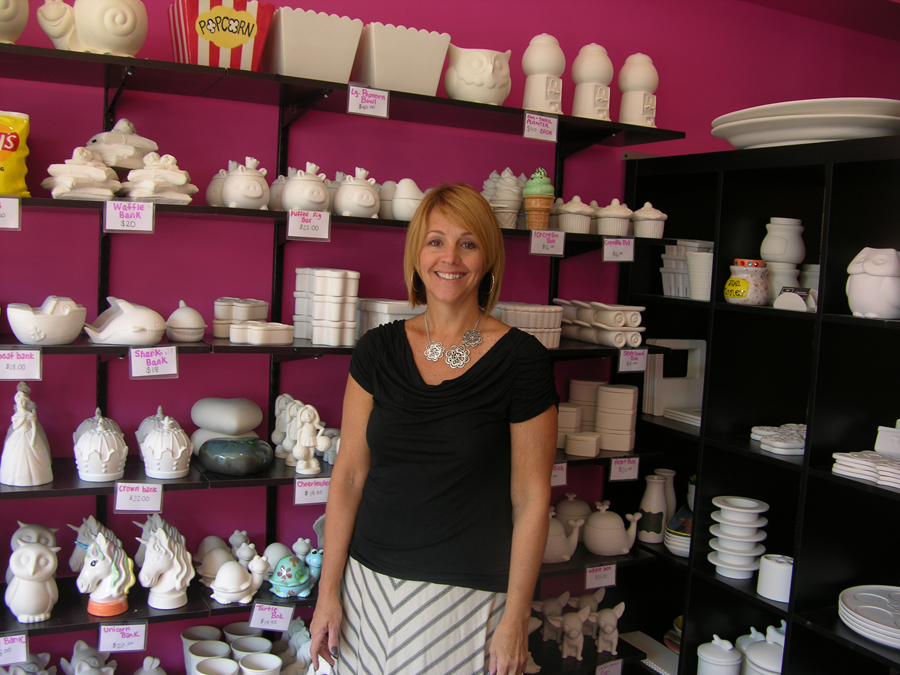 By Neil Schulman
Long Branch — Whether you’re a child or adult; whether you’re looking for a unique party activity, a fundraiser, a class, or just a fun activity; whether you think of yourself as an artist or an amateur, The Pink Elephant Pottery Studio, 87 Brighton Avenue, has an activity for you. 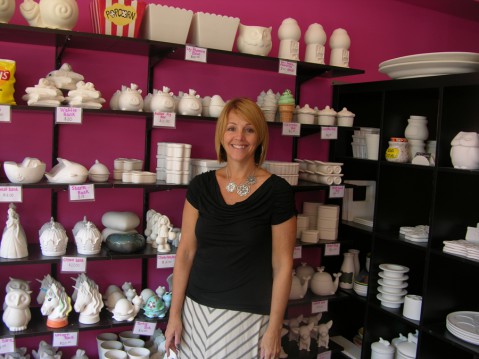 The Pink Elephant offers a chance to paint pottery, make jewelry, work in glass fusion, and more.
Owner Debbie Personette says that the reaction to the recently opened store has been very positive.
“So far so good. The summer was amazing,” she said.
While West End has many restaurants and stores, The Pink Elephant offers a family activity, something many have told her is welcome in West End.
Personette came to West End recently from Allentown, at the same time another business did, The Chocolate Lounge. That one is also owned by a Debbie, Debra Hammond-Ocasio, and the two are good friends. And both chose West End because of the increased foot traffic.
Personette has always been interested in creative endeavors. She went to a design school in New York City, and worked in children’s wear for 16 years. Then she had her daughter, and didn’t want to travel as much. She opened up a flower shop in Allentown, which is still there.
When the economy turned bad, she added pottery decorating, and that helped keep her going. In fact, it was doing well enough she wanted to expand.
The Pink Elephant offers pottery painting, but that’s not all. There are opportunities to create your own jewelry, create glass fusion (art with layers of glass) and much more.
All the paints used are food safe; it’s possible to make your own set of custom decorated dishes. Or make your own decorations for the holidays. Right now the store is filled with pumpkins and creepy crawlies to decorate, but there will be plenty for the Christmas and Hanukkah season too.
The name of the store is used in its tagline – “Who says there are no pink elephants!” Art is supposed to be about creativity and fun, but many people try to put rules in.
“If they want to paint a monkey, they think it  has to be a brown monkey,” Personette said. But just because monkeys are brown in real life, and elephants are gray, is no reason not to paint them whatever color you like – say, pink.
“There is no wrong or right in art.”
“The worst thing I hear is when someone comes in and says ‘I’m not an artist. I can’t paint,” she said. The Pink Elephant provides plenty of stencils and guides for those who feel they need assistance.
The Pink Elephant offers many fun events for kids, events like Pizza, PJs and Pottery. On October 25, they’ll be holding Witches Nite Out, where children are encouraged to come in costume, get their faces painted, and get discounts on their pottery painting.
It also hosts parties. When The Link was there, Personette showed the kiln with projects from a recent birthday, which included items such as painted models of princesses.
The Pink Elephant also holds Ladies’ Night, and welcomes Scout Troops.
In all cases, they work to make sure that other local businesses benefit. If food is brought in, it’s from a nearby eatery such as Scala’s Pizza or Surf Taco.
Other groups hold fundraisers there, with a portion of the proceeds from an evening going to charity.
“We’ll be trying to help out local organizations,” Personette said.
Many families will make a day of it, getting lunch at a nearby restaurant and coming over. Often, they’ll stop by the Chocolate Lounge for dessert too, Personette said.
Look for more activities to come soon. Next summer, The Pink Elephant will begin offering art camp.
The Pink Elephant Pottery Studio is open Tuesday and Wednesday, 11-8; Thursday to Saturday, 11-9, and Sunday, noon to 8. For more information, call 732-229-7800 or visit pinkelephantpottery.com.