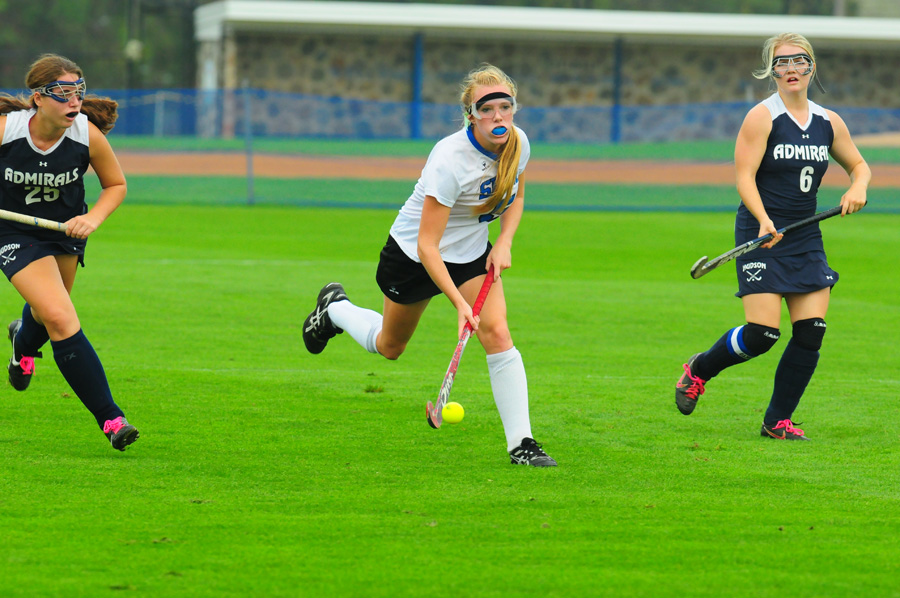 Walter O’Neill LINKsports One of the senior leaders on defense for the Blue Devils is Morgan Jones (5). 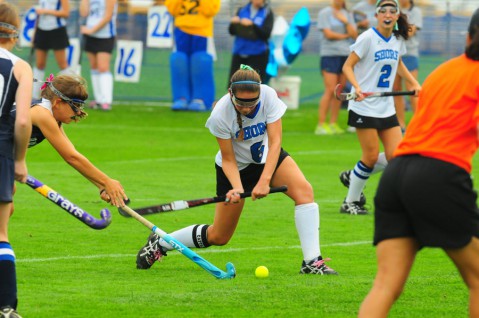 Carol Middough (6) gets ready to smack the ball into the Henry Hudson cage for a goal in the Shore Regional 8-0 win last week. 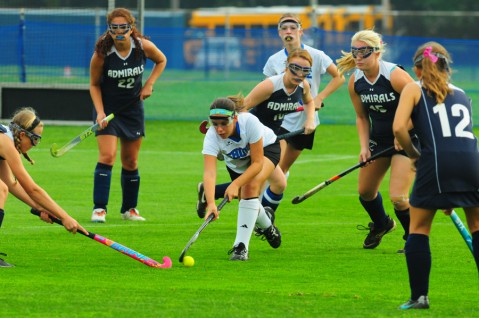 Getting a hat trick in the 8-0 win over Henry Hudson was Shore Regional High School senior Kara Casale (8). 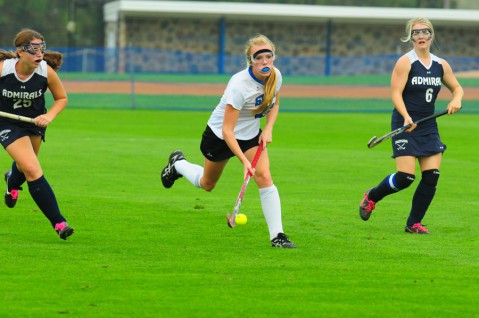 One of the senior leaders on defense for the Blue Devils is Morgan Jones (5). 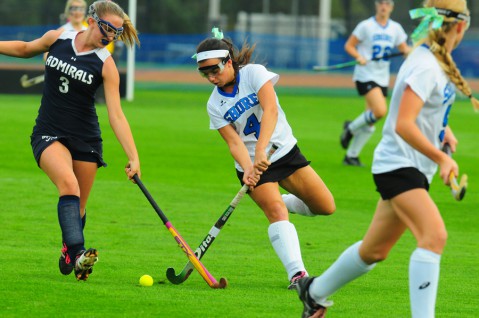 Shore Regional has always been known as a team loaded with skilled upper and lower classmen. Katie Mannino (4) is one of those sophomore players.

By Walter J. O’Neill Jr.
Numbers. In sports it all comes down to numbers, goals, points, yards, stops, blocks, tackles and most importantly the wins and losses.
When you have a program that has 36 state championships, 42 straight divisional championships, 17 Shore Conference Tournament championships, 17 All Americans and the field hockey program with the most wins in the nation, you have to be talking about the Blue Devils of Shore Regional.
On Thursday afternoon the Blue Devils hosted the Admirals of Henry Hudson in a Shore Conference Class B Central match-up. Before the start of the game the Blue Devils recognized and honored the seniors on the 2012 roster.  A team rich in history and deep in talent has seven seniors; Katherine Aitkens, Bailey Bestle, Kara Casale, Gina Jelliff, Shannon Johnson, Morgan Jones and Gina Ruscil.
Shore completely outplayed Henry Hudson beating them 8-0 and improved to 9-1 overall and 8-0 in the division. Casale had a hat trick, scoring three goals in the win. Also getting goals for the Blue Devils were Grace Santi, Carol Middough, Katie Mannino, Annie Deusch and Bestle.
Getting assists were Middough, Casale and Nadine Pearsall. The defense was led by Gina Jelliff, Emma Feroce, Jones, Aitkens and the very good goalkeeper Johnson, who has committed to the University of North Carolina. Shore outshot the Admirals 42-1 in the game.
“Shore field hockey has been a part of my life since the day I was born,” said Johnson. “I grew up going to all the high school games because both of my aunts were a part of the program. It has taught me things that life itself couldn’t teach me.” She also spoke about the strength of tradition being a motivating factor in the success of the program.
“Well it’s definitely hard work,” said Bestle, talking about the field hockey program at Shore. “We spend most of the summer training. These girls on this team become your family because you’re always together.” One of the strongest parts of the program according to Bestle is they out work other schools and have a total team connection.
Aitkens stated she started playing for the best field hockey team in the nation four years ago as a freshman. “I learned the traditions and the success that comes along with it. Each year I grew as a person from this program,” said Aitkens. “Being a part of this program has been a great honor, something I will carry with me the rest of my life.”
“When people think of Shore Regional field hockey, they think of the winning tradition and the championships,” said Ruscil. “Winning, however, does not just happen; it takes hard work, dedication, sacrifice, and commitment by the entire team.” She also spoke about the outstanding players who year after year get recognized and attend major college or universities. However, Ruscil also pointed out there are a number of unsung heroes that play a major role in the team’s success.
“Playing at Shore has been one of the greatest experiences of my life,” said Jelliff. “Coming into Shore I was very nervous and I had never played field hockey before. The girls were all very welcoming and it amazed me how close all the girls were.”
The only blemish on the team’s record this season was 3-2 loss to Madison on their turf field. That game was a battle of two of the best teams in the state as Madison improved to 6-0 after that win.