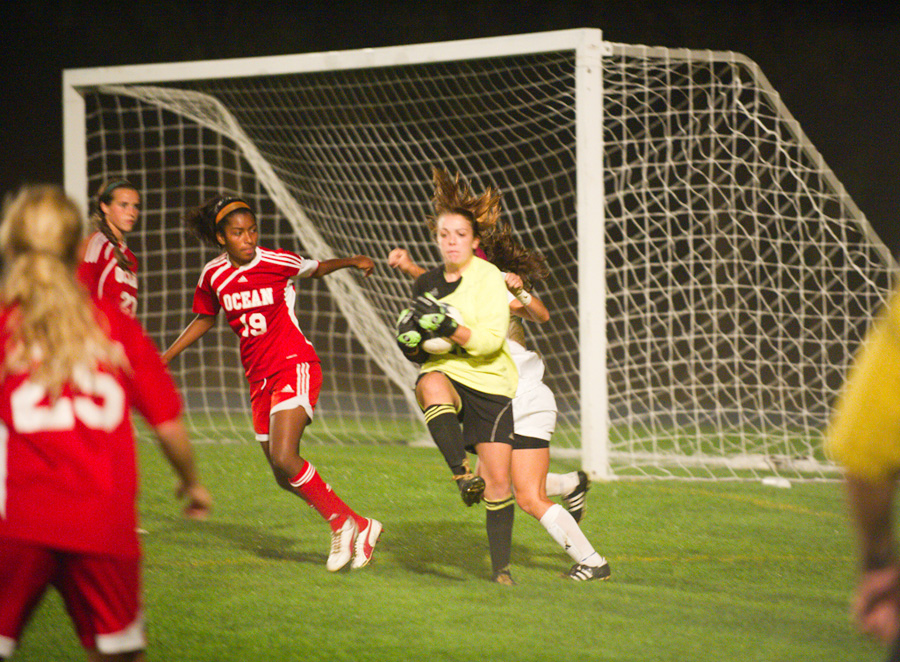 By Walter J. O’Neill Jr.
Taylor Racioppi, a sophomore midfielder and McKayla Conti, a sophomore forward, led the Spartans of Ocean Township to a 5-1 win over the Blue Devils of Shore Regional last week. 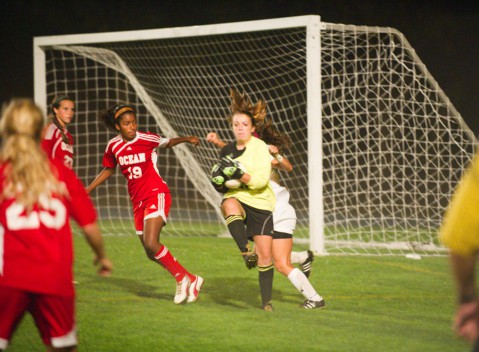 sportshotswlb.com Making a great save in the net for Ocean Township is Makenzie Oates, who had eight saves in the 5-1 win over Shore Regional. 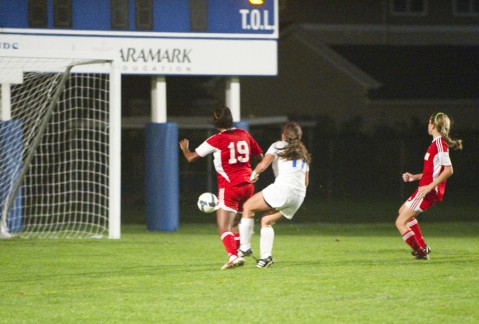 Kicking in the only Shore Regional goal in the 5-1 loss to Ocean Township is Gabriella Russo (17), a senior. Attempting to stop the shot is Diana Perez (19), a junior defender for Ocean.

Shore Regional coached by George Moutis, who is in his fifth season, hosted the Spartans on October 5, in a nondivisional Shore Conference game. The Blue Devils, who finished the 2011 season as 14-4-1, play in the Class B Central division and are currently in the top spot at 6-2 followed by St. Rose, Mater Dei, Point Beach and Ranney.
Colin Sabia is in his sixth year as the Spartans head coach. His team finished 10-9-2 last year and are currently the fifth ranked team in the Shore Conference and in third position in the B North division with Wall Township at 9-1 and undefeated Freehold at 10-0 in the top position.
Ocean took a 3-1 lead in the first half against Shore. The first goal was scored by Racioppi just 28 seconds into the game. Shore Regional was able to even the score at 32:28 on a goal by Gabriella Russo. Just three minutes later Sarah Soltes put the Spartans up 2-1. The last goal of the first half was the second of the game by Racioppi; she scored at 39:08, giving Ocean the 3-1 advantage.
Only two goals were scored in the second half. Both by Conti. The first was at the 49 minute mark and the second was ten minutes later. The 5-1 win gave the Spartans a 10-1 overall record for this season. The loss for Shore Regional drops them to 6-3 this year.
Ocean had a 15-11 shot on goal advantage over Shore. In the goal for the Spartans was MaKenzie Oates with eight saves. Shore Regional had two players in the net, Amanda Olsen a senior had six saves and Katherine Colaguori, a freshman, finished with five saves for the Blue Devils.