Wave runs all over Wildcats

A big, imposing figure, standing at 6’1” and weighing in over 200 pounds is Saquan Gwaltney (61) a junior lineman for Long Branch. 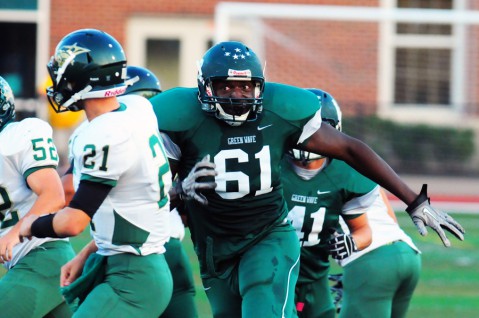 A big, imposing figure, standing at 6’1” and weighing in over 200 pounds is Saquan Gwaltney (61) a junior lineman for Long Branch. 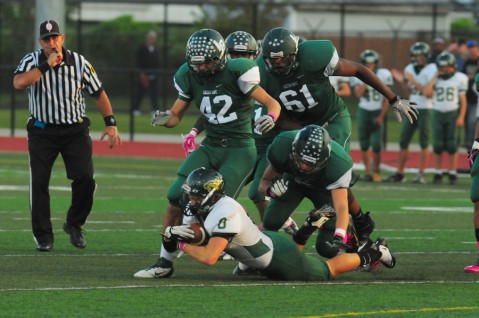 Christopher Pappayliou (42) is a senior linebacker on the Long Branch varsity and here he knocked a Pinelands player to the turf.

By Walter J. O’Neill Jr.
The last time Pinelands High School won a football game was back on November 5, 2010. That year they finished the season at 5-5, and it’s been downhill ever since. During the 2011 season the Wildcats went 0-10 and were outscored 521-40.
Most football pundits expected Pinelands to improve this year, just because they gained some experience and it’s hard to not improve on a losing record. Well, so far they are wrong. The Wildcats traveled to Long Branch on Friday night for a nondivisional Shore Conference game.
It was a game contrasting two completely different programs. Long Branch is ranked as one of the better teams in the Shore Conference. So far this season they have outscored their opponents 159-47, and have depth, speed, strength and skill at all levels.
Pinelands entered the game winless and quickly found out they didn’t belong on the turf with the Green Wave. The Wild cats were fortunate that the mercy rule was enacted during the second half allowing the game clock to run unchallenged. That can only happen when a team has a 35-point advantage.
Long Branch ran only about 13 offensive plays, but they scored 62 unanswered points. It appeared that every time a Green Wave player touched the ball they scored. Long Branch had five rushing touchdowns and two more as a result of passes.
Deon Williams, a junior running back, started the Wave rolling on the second offensive play of the game. He broke away for a 56-yard touchdown. Not even two minutes later he broke away for a 21-yard touchdown. Williams finished with 77 yards on two carries, both touchdowns.
Senior running back Joscil Jackson had a huge game for the Green Wave. He rushed the ball four times for 143 yards, which is an average of 35 yards each time he touched the ball. He also ran for two touchdowns in the victory.
Long Branch had 293 rushing yards on 11 carries and completed two of three passes for 50 yards. Avry Griffin, the Long Branch quarterback, had hardly any pressure on him the entire game and was deadly accurate on his two completions.
The Wave scored 28 points in the first quarter, 21 in the second and the final 13 in the third quarter with a running clock. The win gave Long Branch a 4-1 overall record and currently in third place in the B North division. Ahead of them is Matawan and Neptune at the top.
Pinelands falls to 0-5 and have been outscored this season 271-35. The Wildcats ran the ball 31 times against the Green Wave defense and only turned out 82 yards. They attempted six passes and did not complete a single throw.
Some fans on the Pinelands side were upset that the Green Wave had literally run up the score. However, in the defense of the Long Branch players and coaching staff, when the second and third team players get in how can a coach tell them not to score? Those players want to impress the coaching staff that they are worthy to play on the varsity team. And it is a varsity game, one that is geared to get the players ready for the next level, collegiate games.
It was unfortunate that Pinelands was not up to the same caliber as Long Branch, but that should not take away from the hard work and skill displayed on the field Friday night by all the Long Branch players.