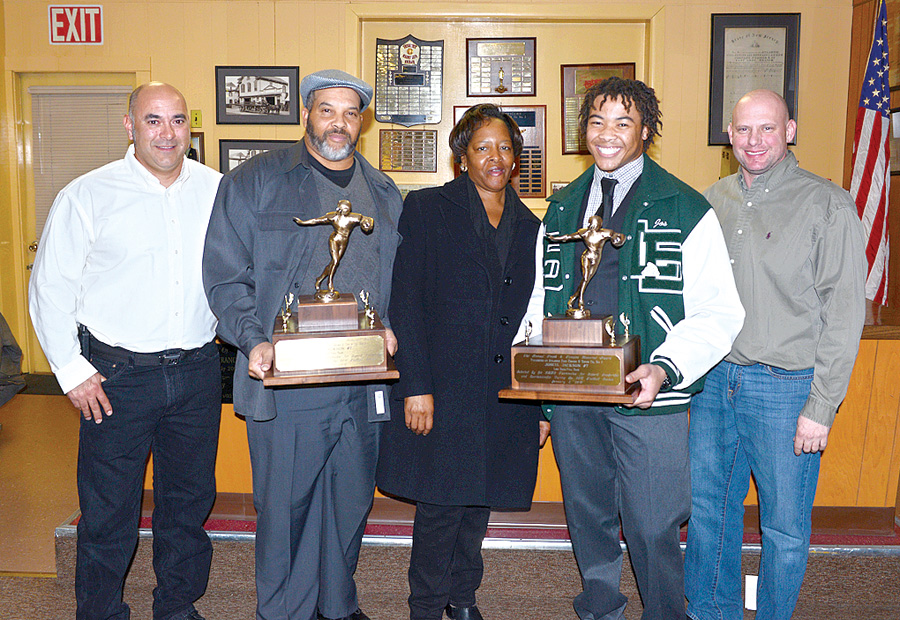 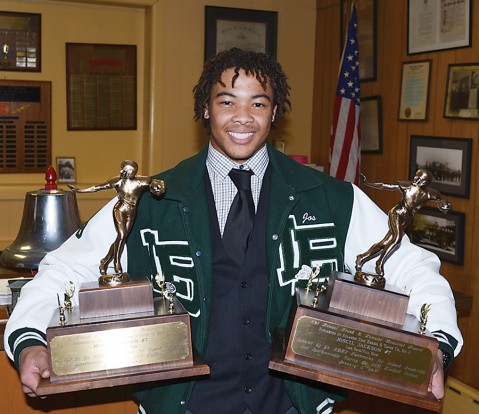 By Walter J. O’Neill, Jr.
Jocil Jackson, a senior at Long Branch High School, has established himself as one of the greatest team leaders in the history of the Green Wave football team. That honor was bestowed upon Jackson during a ceremony last week at the Atlantic Fire House. 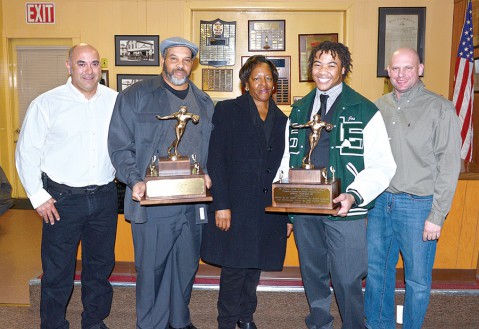 For 51-years the Atlantic Fire House has presented a football player from the city with the Frank E. Tomaini Memorial Award. Tomaini, a member of the Atlantic Fire Company and Chief of the Department in 1959, was a huge Green Wave football fan. He worked the chain gang for years, and rumors had it when Long Branch needed a few extra inches the chains would stretch in favor the Wave when Tomaini was working.

Martin Boa was the first recipient of the award back in 1962. Over the five decades only one player has ever won the award twice. That one exceptional football star was Sam Mills. He first won the award in 1976, the first junior at Long Branch High School ever to win it. He then was recognized for a second time as a senior in 1977.

Mills went on to a college career at Montclair University, then played professionally in the USFL for the Stars and then in the National Football League (NFL) for the New Orleans Saints and the Carolina Panthers. He played 12 seasons of pro-football and had over 1,300 tackles and 20.5 sacks, and 11 interceptions.

One of the special aspects of the Frank E. Tomaini Memorial Award is that the players on the Long Branch High School team pick the recipient. “The award represents leaderships and sportsmanship. Two very important qualities,” said Dan George, head coach of the Green Wave. George himself was a winner of the award during his high school playing days. “In 2012 the team selected Jocil Jackson, the first junior since Sam Mills.”

Jackson, who plays running back and linebacker for the Green Wave, was again picked by his teammates to win the 2013 Frank E. Tomaini Memorial Award. “This is only the second time in the history of the award that one player won it twice,” said Steve Pejakovich, 2nd Lieutenant at the Atlantic Fire Company and member of the awards committee. “Jocil Jackson has proven his leadership on and off the football field and along with Sam Mills are two great football players from this city.”

“When I won the award last year I was unfamiliar with the history and tradition of it. It was only after the presentation last year that I fully understood the tradition and honor of winning the Frank E. Tomaini Memorial Award,” said Jackson. “To win it a second time, I am very grateful to my teammates and realize how special it is to share this honor with Sam Mills.”

“Tonight we recognize you for what you have done on the football field this past season,” said Michael Salvatore, Superintendent of Schools. “However, what we are looking forward to is what you will be doing with your future.”

Jason Corley, Athletic Administrator at Long Branch High School has known Jackson since he was a youngster. “I have watched Jocil grow into a young man who is respected by his peers and coaches,” said Corley. He stated that he was not surprised by the success Jackson had while at LBHS. “Jocil works hard and the Frank E. Tomaini Memorial Award is well deserved and the fact that he is the second individual to win it since Sam Mills is an achievement. I am so proud of him.”