Five charged with robbery after pistol-whipping 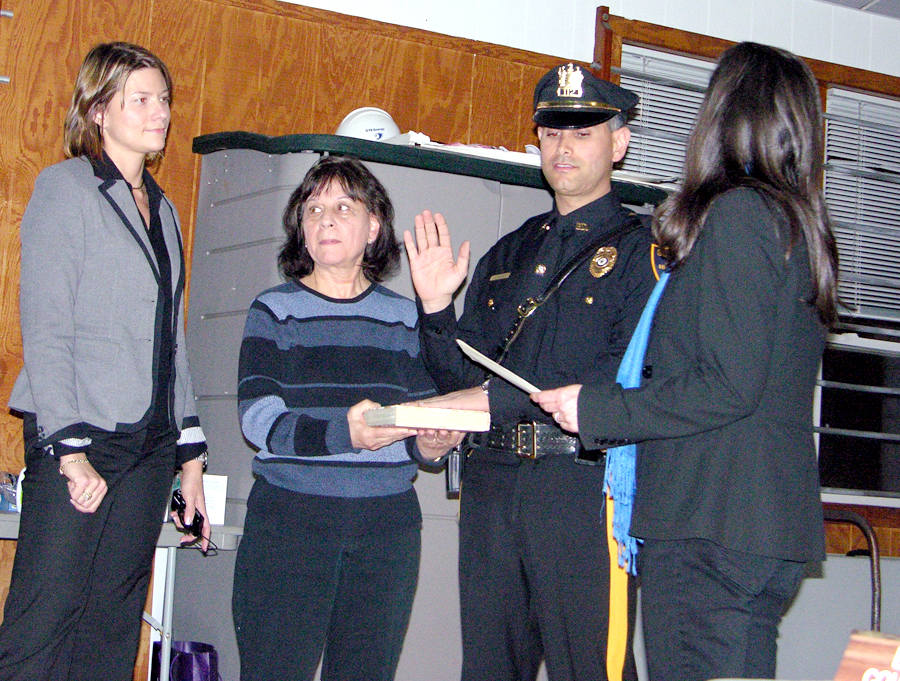 Eric Bennett takes the oath of office of Corporal of the Sea Bright Police Department.

By Neil Schulman
Sea Bright — The Sea Bright Police Department has promoted three officers to fill spots left by recent retirements.
At the Jan. 15 Borough Council meeting, Kevin Lovgren was promoted to the rank of Sergeant, and John Arias and Eric Bennett were both promoted to the rank of Corporal.
Councilman James LoBiondo said these promotions will help keep the department functioning smoothly.
“We’ll have supervisors on every shift,” he said.
Like the rest of the borough, the Sea Bright Police Department was hit hard by Superstorm Sandy. The building sustained major damage, as did the Fire Department. Officials are figuring out where to put police long term.
“We’re still discussing where we will put the Police Department, but it will probably be in here (Borough Hall),” Councilman Read Murphy said.
* * *
Sea Bright Council will hold a special meeting Tuesday to introduce an ordinance changing the base flood elevations and height calculations.
The borough regulations will use two feet above FEMA’s Advisory Base Flood Elevations (ABFE) as the recommended heights for all buildings.
FEMA introduced the ABFE maps last month, as guidelines to help residents in the area who were considering how to raise damaged homes following Sandy. While these are still advisory, they will be tentatively adopted at the end of the year.
The borough’s new ordinances will incorporate FEMA’s new flood guidelines, which have changed over the last few years. This includes redefining what “base height,” of a building means. It used to be determined from the crown of the road the house was on, but now it will be made more specific to each property.
Borough officials say the advisory heights are all conservative, and if FEMA chooses to change them after their are made official, it will be to reduce, not increase them.
But many, including Mayor Dina Long, say that the way FEMA chose which zones to put houses in makes little sense. Most properties in Sea Bright are in either Zone A or V, classifications that depend on what type of storm damage is expected.
“My next door neighbor on the east side, she’s in an A zone, and I’m in the V zone, and we’ve got, six, eight feet between our windows,” Long told one resident who was concerned about their own home’

s classification.
Long suggested appealing the designation when FEMA begins considering changes to their maps, which will be after they are tentatively adopted.