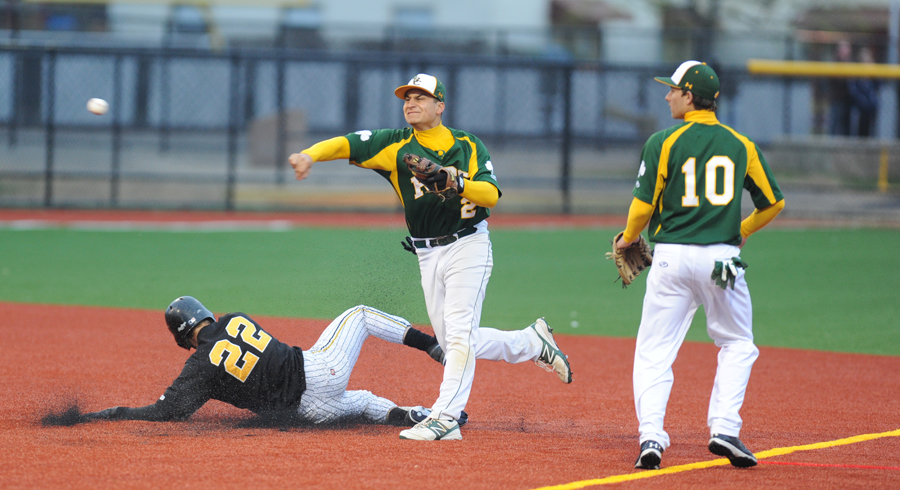 Making a double play for Red Bank Catholic is Alfredo Molina (2) a junior as Matt Burks (22) of Monmouth Regional attempts to slide into second.

By Walter J. O’Neill, Jr.
Hollywood could not have written a better script for Anthony Yaccarine, a senior at Red Bank Catholic High School. Thursday night he became a star when he smacked a game-winning three-run homer giving RBC a 5-4 win over visiting Monmouth Regional. 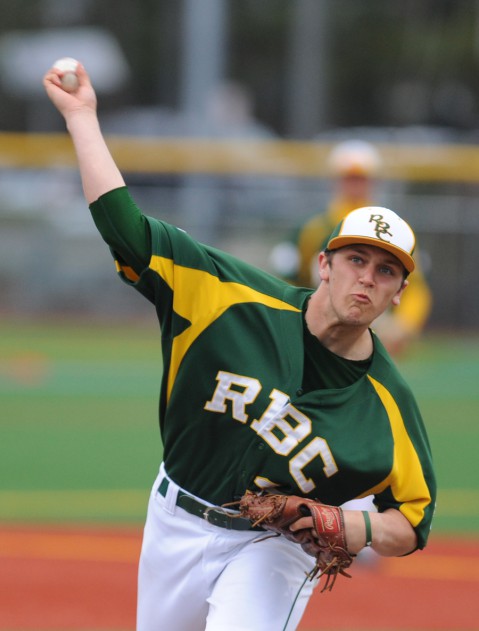 Walter O’Neill LINKsports Clocked at over 90 mph and one of the top pitchers in the Shore Conference is Michael Rescigno (34) a senior right hander. He pitched the first five innings against the Falcons but left the game with his team trailing 4-2. Red Bank Catholic won the game, 5-4, in the bottom of the seventh inning on a three-run homer by Anthony Yaccarine. 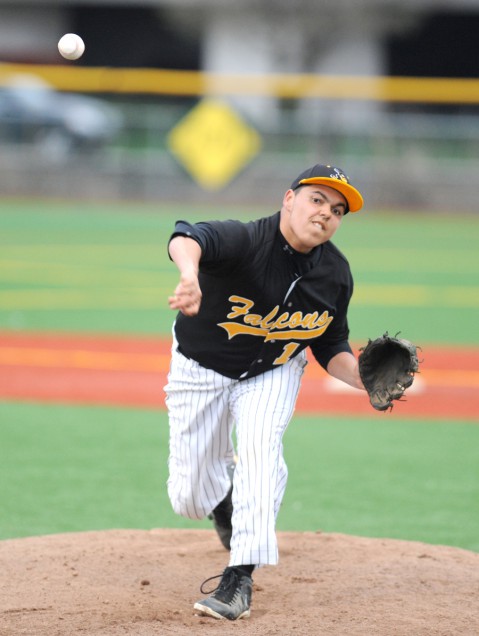 Walter O’Neill LINKsports Monmouth Regional had a 4-2 lead on the strength and accuracy of Tom Broyles (16) a senior after his five innings of work against the Caseys of Red Bank Catholic. He also smacked a solo homerun in the first inning.

Yaccarine went to the plate with his team behind 4-2 in the bottom of the seventh inning. RBC had runners on first and third with two outs. The count was two balls and two strikes, and then Zach Cantrella of Monmouth Regional threw a fastball at Yaccarine who blasted it out of the park. The Caseys fans and players went crazy as RBC took the 5-4 win and improved to 9-1 overall and 8-0 in the Shore Conference Class A Central division.
Monmouth Regional started the game with a bang in the first inning. The first two batters for the Falcons had struck out and the third batter was Tom Broyles, a senior. He had strikes and that is when Red Bank Catholic pitching ace Michael Rescigno threw his fastball, which has been clocked over 90mph, and Broyles swung his bat.
“I thought it was just a routine pop up to left field,” said Broyles. However, as he rounded first the sounds of his teammates cheering made him realize that he had just hit a homerun. “All I knew was that the pitch came at me fast and hard. And when I saw and heard my fellow teammates I just got so pumped up.”
That enthusiasm is something coaches and players know will help motivate the team. But Ted Jarmusz, head coach of the Falcons, told Broyles to settle down. He needed him calm and steady because Broyles was the starting pitcher for the Falcons. “The coaches told me that I needed to keep my pitching emotions separate from my batting emotions.”
It took a little while for Broyles to settle down, but when he did it was perfect timing. Red Bank Catholic had bases loaded with two outs in that opening inning. “I was not nervous at all,” said Broyles. “I knew what I had to do and we got the job done.” He was able to retired the side without giving up a run.
Monmouth Regional scored an additional two runs in the top of the third inning which shocked many of the RBC fans. Broyles talked about how his strike zone was different from that of Rescigno. “The umpire was not giving me the outside edges like he was giving to Rescigno. He was making me throw it right down the middle, but that comes with home field advantage I guess,” said Broyles.
Red Bank Catholic scored two runs in the bottom of the fourth inning. Both Broyles and Rescigno pitched the fifth inning and the score remained 4-2 Monmouth going into the sixth inning. Taking the ball for the Falcons was Zach Centrella and John Seldon for the Caseys.
“The rules only allow me to pitch ten innings in a five day period,” said Broyles. He also estimated that he threw about 100 pitches in those first five innings. Going into that last inning the Falcons still held a 4-2 advantage. That is when Yaccarine had moment of stardom.
“We showed that we have improved a great deal since the season opener and that we belong but are not there yet and still have some work to do,” said Jarmusz. “Tommy pitched extremely well keeping them off stride for five innings and his opposite field homer was huge in the first. We are missing our leading hitter Brian Quinn who, was at a mandatory overnight stay at West Point.” But the coach gave credit to the Falcon players whose bats stepped up that night.
“Coach Jarmusz is a great guy and someone who is very
passionate about baseball,” said Broyles. One of the coach’s rules is that if the team loses and it’s a road game nobody can speak during the bus ride home. “It was a very quiet ride home from Red Bank on Thursday night. Zach was really upset with the loss, but as a team it was not just his fault and we wanted him to know that.”
Sunday afternoon Broyles decided that he was going to be playing baseball at Drew University next season. “I liked the school, coaches and players when I made my visit. They want me to pitch but will also give me an opportunity to bat and play the field,” said Broyles.
He has been playing varsity baseball at Monmouth Regional for the last two years, but actually started throwing the ball when he was 11 months old. His dad was also an outstanding player at Monmouth Regional and was on the first team that Jarmusz coached 27 years ago. “I started playing T-ball when I was four. Baseball is my life and that is all I want to do,” added Broyles.
Most athletes are superstitious or have certain items they require before a game. For Broyles, he needs to have chicken tenders and cheese fries from Guidos Pizza in Eatontown for lunch. So the days that he pitches his dad makes a lunch run for him. The only other ritual he has is that he ties his left shoe first before a game. “Normally I never tie my shoes,” said a laughing Broyles. 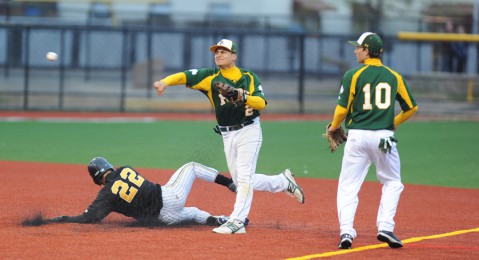 Making a double play for Red Bank Catholic is Alfredo Molina (2) a junior as Matt Burks (22) of Monmouth Regional attempts to slide into second.