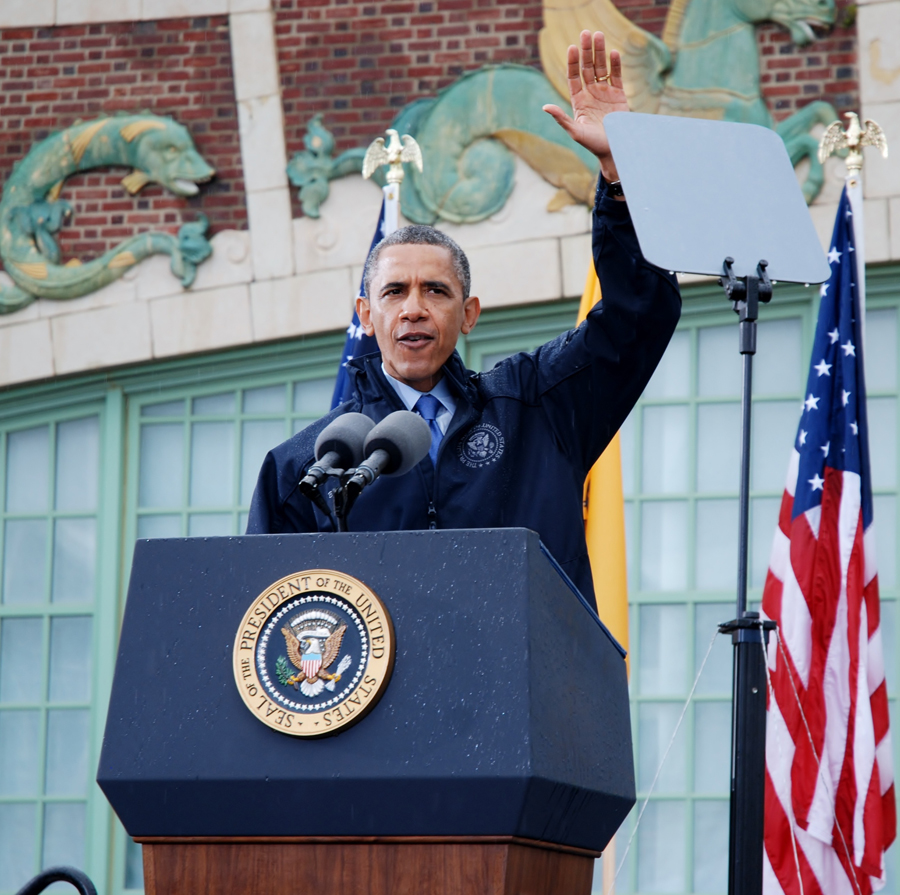 President Obama waves to the crowd outside Convention Hall in Asbury Park on Tuesday. Photo taken by Teja Anderson

By Teja Anderson The cold steady drizzle of rain could do nothing to dampen the spirits of the crowds of people who showed up Tuesday on the Asbury Park Boardwalk outside Conventional Hall to hear our 44th President of the United States of America, Barack Obama, speak. 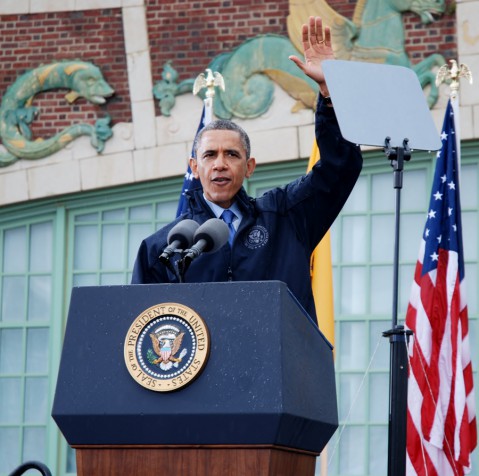 President Obama waves to the crowd outside Convention Hall in Asbury Park on Tuesday. Photo taken by Teja Anderson

All it took was a blue ticket (thank you Monmouth Beach Mayor Sue Howard), a Link press News pass and a lot of smiling and running into the right people at the right moment and I found myself just 20 feet from the podium with less than two hours till show time.  The groups up front were very excited, even though no one was properly dressed and umbrellas didn’t make it through the security checkpoint and pat-down. They turned out to be town mayors and officials, volunteers from political and charity organizations, local restaurant and business owners and people who “knew the right people.”  One thing was clear, we were all thrilled to be there and we all had Sandy stories to tell while we waited for the main attraction.  When The Blues Brothers’ “Soul Man” started playing, Asbury Park Mayor Ed Johnson and City Manager Terence Reidy led their celebratory group to the left of the stage in a groovy dance and got the crowd clapping and swaying. As the White House Press strode in, a hush fell over the crowd and local singer Sharmane Gilliam swished up to the podium in a full length gold lamé muumuu to wow us with her robust rendition of the Star Spangled Banner.  A few minutes later local business owner Mike Pimco of Style Rocket led everyone in the Pledge of Allegiance and then, after a few very long minutes, Governor Chris Christie took the stage.  Christie reminded everyone that this was not about political affiliation but about working together to rebuild. I saw both parties well represented, from Senators Jennifer Beck and Joseph Kyrillos to Congressmen Frank Pallone, Rush Holt and Chris Smith and Assemblywomen Mary Pat Angelini and Caroline Casagrande and Monmouth Beach resident and Lt. Gov. Kim Guadagno.  Christie said that from day one after Sandy he was always about what was best for the people New Jersey and getting us the help and attention that we needed, not about playing politics. Then he introduced our President, Barack Obama.  As Obama jogged out of the Conventional Hall doors flanked by his Secret Service men, everyone just started screaming and clapping and I suddenly realized why those “poor saps” I had noticed stuck on the far right of the stage were positioned there; they may have a bad view of the stage but they got all the first set of Obama handshakes.  Obama bounded up the stairs to the podium and waited for the crowd to quiet down before he launched into his speech about the tenacity of the Jersey Shore and the rebuild efforts we are making.  “We all understand there is still an awful lot of work to be done,” he acknowledged,  “After all you’ve dealt with, after all you’ve been through, the Jersey Shore is back and it’s open for business.”   Obama talked about having just come from Point Pleasant where Governor Christie beat him in a football ring toss and Christie’s kids taught him the “proper technique to hit the Frog Bog mallet.”  He acknowledged that we still had a lot of work to do and credited FEMA with working as hard and well as they could (though the folks around me did not all agree).  He closed by saying; “America, bring your family and friends. This summer; spend a little time and a little money on the Jersey Shore.”  Then he waved good bye and exited the stage and as luck would have it, he walked clockwise around the front of the crowd and started shaking hands again. I was not missing out and I got one.  I can report that Obama’s hand was cold and damp and his fingers were long and smooth and thin and his grip was strong and he gave me an honest squeeze…. I might never wash my hand again.  Then the woman next to me asked him for a hug and he gave her one. Next time!  As the crowds filed out I noticed about ten police boats zooming off across the water and the security men and women look a little more relaxed. It was certainly a lot easier and faster getting back out than it had been getting in.