Governor Christie has nothing but praise for Monmouth Beach

A beautiful day for a Cruise to the Jersey Shore 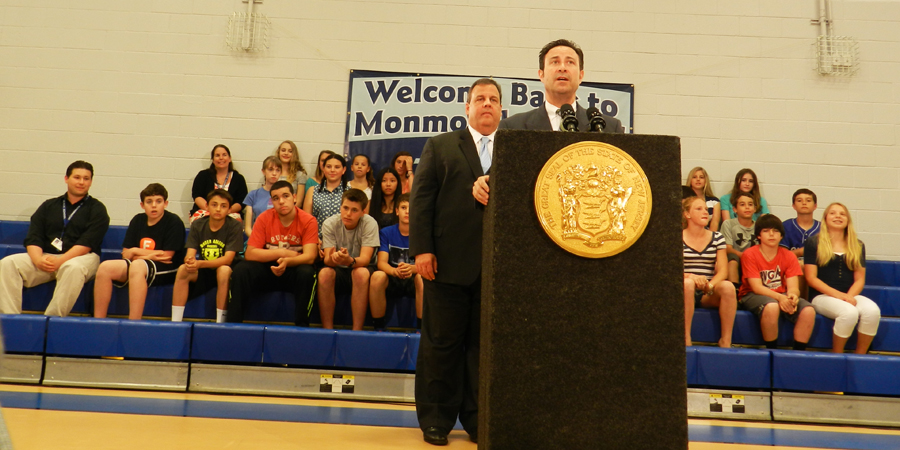 By Patty Booth O’Neill
Monmouth Beach — Governor Chris Christie visited Monmouth Beach Elementary school on Wednesday to congratulate the community, faculty and students on their success in getting the school back to working order after the devastation caused by Superstorm Sandy.

Mayor Susan Howard, members of the Board of Education,  Senator Joe Kyrillos and other dignitaries were on hand along with members of the press.
“I’m not here to take credit today,” Christie told the small group at the press conference. “It’s not my credit to take — it’s yours — it’s your commitment to children and community on getting them back to school.” He said the credit goes to teachers, parents and the leaders of the town. And he was impressed with the role social media played in getting the town donations and supplies. He also said schools in other districts, such as West Long Branch, Shore Regional and Oceanport did an amazing job making displaced Monmouth Beach students feel at home and welcome. 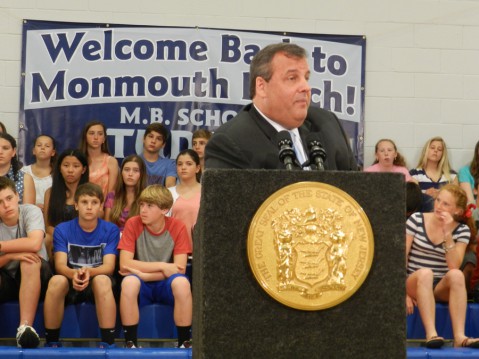 “I’d just like to say Governor, thank you for your leadership and urging us to pull our boots up and get back to work,” BOE member Paul Sgro said at the beginning of the conference.
There are five school still closed in New Jersey and Christie vowed they will all be opened by September. “But don’t think for one minute I’ve forgotten about people still out of their homes,” he said. “I think about them every day.”
Christie said that homeowners were diligent in applying for grants to rebuild or elevate their homes. He said that, in comparison businesses were slow in seeking financial assistance. He said that the money available has nothing to do with SBA (Small Business Association). He encouraged businesses damaged by Sandy to go to the EDA (New Jersey Economic Development Authority) and apply for a grant or loan. “There’s a lot of paperwork, but they don’t have the same criteria as SBA, and there is still a lot of money left,” he said.
The Monmouth Beach seventh-grade class was the backdrop for the Governor as he spoke to the room. They were commended for how well behaved and quiet they were during Christie’s talk and he acknowledged that having eighth graders was a lot easier to handle than the third graders he had just visited at Union Beach Memorial School that morning, another school that had opened up that week.
Christie fielded questions by the press — some he answered and some he brushed off as a waste of his time. The League of Municipalities? He said they are corrupt and can go out of businesses for all he cared. “When I receive their report I will throw it in the garbage,” he said.
That week The LINK News had asked the public in ‘Facing the Question’ their opinion about Chris Christie for president. The response was favorable towards the Governor. The LINK  asked him what he thought about that and what his aspirations were for the presidency.
“I don’t pay attention to poles. I’m popular right now, but who knows what’s going to happen down the road,” he answered. “I love my job in New Jersey and I don’t have any plans on running in 2016. After that it depends on how Mary Pat and my family feels about it. Are they ready for that lifestyle.”
But the Governor’s appearance on the Jimmy Fallon show that very night had people talking again about his true aspirations towards the presidency.
When asked if any other Democrats were going to come out and endorse him, he said he hoped so. “But I hope they will work for my campaign, not just offer their words.”
Someone asked Christie why small schools like Monmouth Beach don’t get as much money as larger schools, which sent him on a diatribe about Abbot Districts and the Supreme Court. “The Supreme Court is blind when they send money to inner city schools and not all schools,” Christie said. He said that the Supreme Court thinks that it will make students better, but, he said, it’s not true. “Seven lawyers in black robes trying to make decisions on education frightens me. Monmouth Beach should be yelling and screaming at the State Senate,” he said.
Christie also said he was not worried about the upcoming hurricane season, “because there’s nothing I can do about it.” Then he joked that he was hoping it depended on Karma and how you gave at the office last year. He felt that New Jersey had given enough already. “I’m hoping that hurricanes will miss us this year. They can fizzle out, go out to sea or hit someplace else, just not on us.” He said that New Jersey won’t be ready dune-wise. “But I can’t worry about things I can’t control, he said.
Monmouth Beach Mayor Susan Howard thanked the Governor for all his help since Sandy. “I would like to thank you for your leadership and your staff. No matter when I called, if it was on a Saturday, 10:00 at night they answered the phone,” she said. “Thank you.” 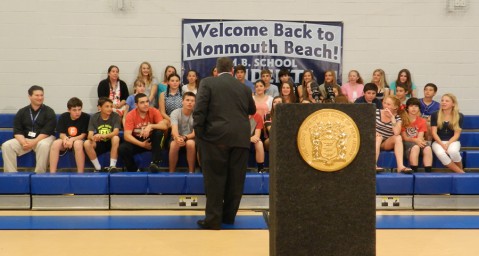 Governor Christie thanks the seventh grade class for their time, and praised them for being so quiet. After his press conference he toured the school.