Update on the Long Branch Bank of America armed robbery

A redevelopment proposal would transform this warehouse into a beer and scultpure garden, restaurant, meeting area and more. 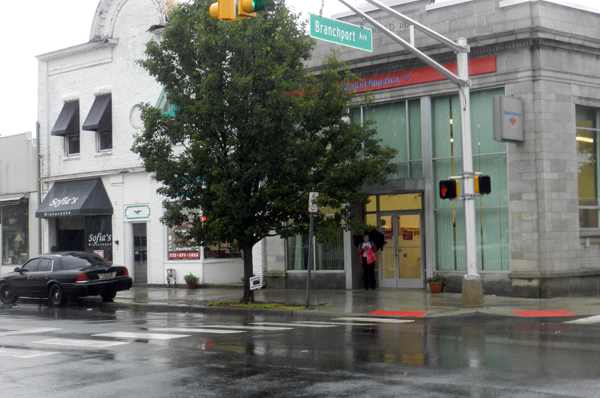 Long Branch – The Bank of America located at the intersection of Broadway and Branchport Avenue was held up on Friday, July 12, around 12:24 in the afternoon. The suspect, a Caucasian male with graying blond hair entered the bank and handed the teller a note stating that he had a hand gun and demanded money.

In a prepared press release issued by the Long Branch Police Department it stated that the teller handed the suspect the money and he fled the area on a bicycle. It went on to say that a description of the male was broadcast immediately and within minutes a subject matching the description was stopped in the area of 36 Dudley Street.

In an unconfirmed report, but coming from credible law enforcement source, The Link News learned that the bank teller placed a GPS tracking device into a money bag that the fleeing suspect took with him. Police were able to use the global positioning system of the device to follow the money.

The suspect rode away from the bank on a bicycle through the residential area behind the bank. Long Branch Police cars quickly responded and flooded the area with manpower. Officers were telling bystanders to get inside and off the streets as they started searching for the alleged armed man.

Police knew they had him trapped in the area of Washington and Dudley streets, and that is where the largest police contingent gathered. One resident of Dudley Street, who was coming out of her home around 12:30 p.m., saw police officers running around her yard with assault weapons yelling for her to get inside her house. “I was scared. I had two children inside and didn’t know what was going on,” said the woman. However, she soon realized that police were searching for a dangerous suspect and they told her to pull down her shades and stay away from the windows.

Long Branch Public Safety Director Jason Roebuck was responding to the area and saw a person fitting the description on a bike in the area and stopped the man. “At first the man I stopped appeared to be much older than the original description that went out,” said Roebuck. “When I asked him what he was up to he stated that he was on his way back from the race track.”

Patrol Officer Jenn Gant arrived to back up her boss. “We held him until bank surveillance photos confirmed that he was the man that we were looking for,” said Roebuck. Police also recovered the $1,080 stolen from Bank of America.

Police have identified the accused as Michael Marszalek, 55, of 52 University Drive in Long Branch. Marszalek told officers that he is unemployed and disabled. His bail was set at $100,000 by Judge Reisner.

Roebuck would not confirm nor deny the use of a GPS unit in the apprehension of Marszalek. “For law enforcement reasons we can’t talk about certain aspects of how we conduct our investigations,” said Roebuck. “I am very proud of our police department on how quickly they responded and within four minutes of the call we had a suspect and within fifteen minutes we had an arrest and the money recovered.”

It should also be noted that a weapon was never shown and never recovered. From what The Link News had learned the police were having a little bit of an issue locating the money for a short time as the accused has placed it into a different bag and tossed it under a police car as it responded. The money was showing up on the GPS locator but since it was under the patrol car they couldn’t see it until that car pulled away.

Bank of America was open for business Saturday, July 13, with a private armed security guard posted outside the front door.