Pallone renews call to crack down on dumping of medical waste 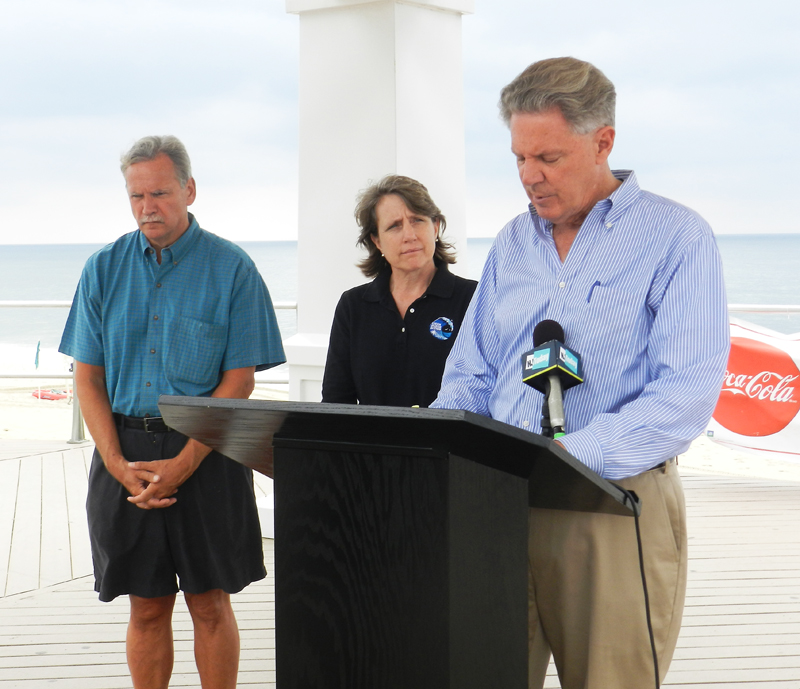 Long Branch — Congressman Frank Pallone, Jr. joined with representatives from Clean Ocean Action and the Sierra Club on Thursday at Pier Village to announce he has reintroduced his bill, the Medical Waste Management Act of 2013, in response to reports last week that syringes had washed up on the beaches of Island State Beach Park.  Pallone’s legislation cracks down on ocean polluters with tough regulations on how to dispose of medical waste. 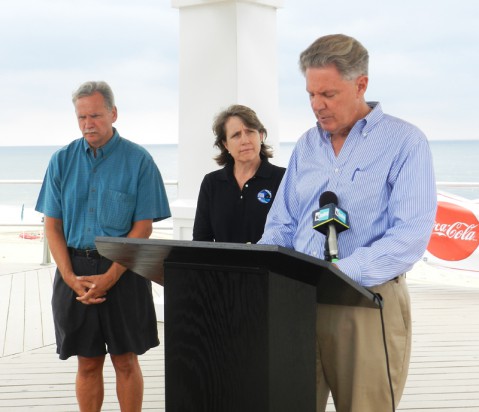 “We have to continually be vigilant,” Pallone told those assembled at the press conference. “We have to pass this legislation.”

Pallone said that Senator Lautenberg was one of the people to put this legislation in effect back in the late 80’s. “We still have a good program in New Jersey, but that doesn’t help us if other states are still dumping illegally,” he said.

The Medical Waste Management Act calls for a tracking system that will hold medical waste generators accountable and gives greater authority to take swift action investigating and prosecuting those that improperly dispose of medical waste. The bill would lay out regulations to allow for smooth compliance for hospitals, health clinics, home source users and other medical waste generators.  The legislation also establishes a syringe disposal program to educate the public about acceptable methods for individual syringe disposal.

“The medical waste found on New Jersey’s shores last week was fortunately limited enough that staff could respond quickly to remove it, but next time we may not be so lucky. We must ensure that we are doing everything we can to keep our lakes, rivers and shores clean and safe.” Pallone said. “Medical waste poses a significant health risk to our beachgoers, pollutes our pristine waterways and threatens the tourism industry in our coastal communities.  Medical waste dumping is a critical problem that needs a nationwide solution. My legislation will ensure consistency and clarity within the law so we can put an end to interstate dumping.”

In the summer of 1988, hundreds of beach-going days were lost due to medical waste dumping on the Jersey Shore. It was estimated that the New Jersey tourism industry lost $1 billion that summer. Medical waste continues to be a problem nationwide, from coastal communities to any place where waste generators choose to illegally dump.

“Last week’s incident on medical waste reminds us we have to do more to control and prevent this from happening. That is why we support and need Congressman Pallone’s legislation to require stronger controls on medical waste. There should not be more needles on a beach than at an HMO. A day at the beach should not mean a trip to the doctor’s office. This hurts tourism as well as the environment along our coast and that is why we need this legislation,” said Jeff Tittel, Director, NJ Sierra Club. “It’s even sad that we are here today, we shouldn’t have to be,” he said.

“Garbage wash-ups are a scourge of the Jersey shore, and while garbage wash-ups occur far less frequently than in the past, dangerous medical wastes such as syringes are still far too common. Congressman Pallone’s bill establishes important, reasonable regulations to educate consumers and better manage and control the disposal of syringes.  It should be easier to find a needle in the haystack than to find a needle on our beaches,” said Cindy Zipf, Executive Director, Clean Ocean Action. “Over the last two days over 350 syringes washed up on our shores.”
She said that New Jersey was waste free by 1997 and then things began to slip backwards. “We are finding dead dolphins  and waste findings are picking up again.”

Fighting to protect the Jersey Shore, Congressman Pallone reintroduced the BEACH Act this year, his legislation that requires tough new water quality testing and public notification standards so beachgoers are better informed about the safety of their beaches.  As a member of the House Natural Resources Committee, he has also fought against oil drilling in the Atlantic and seismic air gun testing, which he believes is the first step to drilling.  He has helped to secure millions of dollars on beach replenishment to restore our beaches after the historic damage from Superstorm Sandy.

Provisions in the Medical Waste Management Act include:

Outlining specific requirements for generators, transporters and disposers of medical waste, including registration with the U.S. Environmental Protection Agency (EPA) and appropriate compliance with labeling, packaging and storage requirements of the waste;
Providing civil and criminal enforcement authority necessary to prevent medical waste dumping on our beaches;
Granting the EPA the authority to investigate these crimes and provides them the necessary resources to take swift action.

Requiring an annual report to Congress on the state of medical waste management;
Authorizing the EPA to approve state medical waste programs that are at least as rigorous as federal requirements to ensure national consistency and set minimum standards.