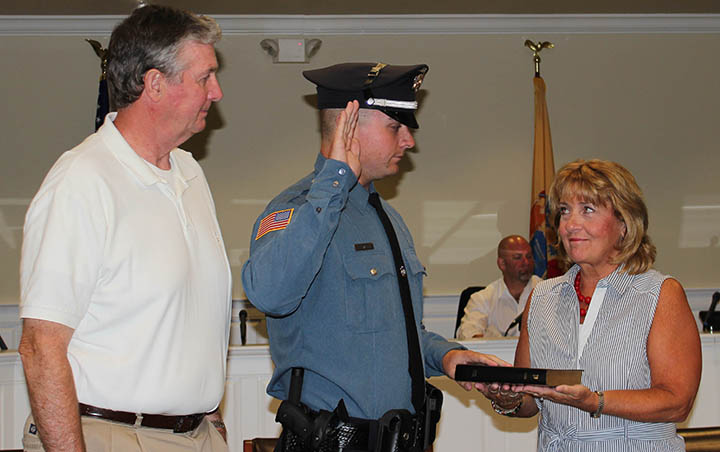 Kevin Stroebel is sworn in to the West Long Branch Police Department on August 7 alongside his parents, Maureen and Robert.

By Angela Ciroalo
West Long Branch — A new member was welcomed into the Borough of West Long Branch Police Department on Wednesday, August 7. Kevin Stroebel was sworn in as a patrolman. 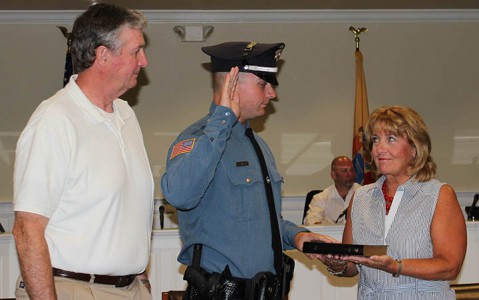 Kevin Stroebel is sworn in to the West Long Branch Police Department on August 7 alongside his parents, Maureen and Robert.

The meeting room of Borough Hall was filled with proud faces watching Stroebel receive his position as the borough’s newest officer, although none appeared to be as satisfied as Police Chief Larry Mihlon and his police officers.
“There are various layers involved in the process,” said Mihlon. “And the trick is … trying to find a police officer who is not only just a good police officer, but a good police officer who is going to fit into the community in both the police department and the community at large.”
One of the borough’s officers left the force a few months prior, leaving the department with a void. Members of the police department, command staff, as well as the mayor and council spent these months searching for a candidate to meet the chief’s requirements.
“I am very happy tonight to report to you all that we were very successful,” said Mihlon.
Stroebel read his oath of office alongside his mother, Maureen Stroebel, and his father, Robert Stroebel. The audience included friends and family, along with members of the police department.
Borough council members and Mayor Janet Tucci lined up to personally welcome the officer into their community and department after the ceremony.
The mayor and council met with the chief to choose between the final three candidates. “I think we definitely ended up getting the best of the bunch,” Councilman Christopher Neyhart said.
Stroebel is a graduate of Christian’s Brother Academy High School and Monmouth University, where he received a Bachelor’s Degree in Criminal Justice. He was previously a police office in Ocean Township and Avon-by-the-Sea.
Stroebel joined “twenty of the finest police officers you will see in the state of New Jersey,” Mihlon said.
Stroebel will complete his final training this fall. Once the training is complete he will be prepared to serve the borough. He will take classes at the Monmouth County Police Academy and attend the Field Training Officer Program in WLB.
“If we’re lucky,” Mihlon said, “and I believe we will be, Officer Stroebel will be ready to deploy on his own early next year in 2014.”