Outracing all the GSS Industries defensive players is Blake Hamilton (23) of Sterns Trailers who scored 23 points in the 126-98 win.

He is not the most graceful athlete to watch. He is left handed and always seems that he is off balance, but that is his style or trademark. And it worked, as Blake Hamilton; a 6’7” forward was named the MVP of the 2004 Northeast Conference Tournament, the 2005 Northeast Conference Player of the Year and scored nearly 1,500 points as a Monmouth University Hawk.

After graduation he went oversees for four years and played professionally in Europe. During the summer he could always be found refining his game at the Jersey Shore Basketball League playing for Sterns Trailers. He has always been a fan favorite, talking to everyone, having his picture taken and even signing autographs.

He has started his own business where he teaches basketball fundamentals and holds clinics. He works with elementary and high school students during the year and even continues with player development at Monmouth University.

“I have been very fortunate to have Blake on my team,” said Ron Pastore, head coach of Sterns Trailers. “Blake is like a player coach. He does not have an ego saying he needs to play a certain amount of minutes each night. In fact all he wants to do is help develop the younger players on the team.”

Before games, on the bench, on the court, timeouts, halftime, and even after the game Hamilton can been seen giving advice to the younger players. “I just want to help these guys,” said Hamilton. “I had some great coaches and some wonderful experiences and if I can share my knowledge with them and help them improve than I did something worthwhile.”

Last Thursday night Sterns Trailers took on GSS Industries, one of the newest teams in the JSBL this summer. “This year the teams are pretty evenly matched with talent,” said Hamilton. “We had a few years when a few teams were in the league that were lacking in players and skill level. But not this year, it an exciting summer of basketball as anyone can win on any given night.”

One of those young players Hamilton has been mentoring is Dane Miller, who just finished playing four years of basketball at Rutgers University, where the program was scared by head coach Mike Rice who was fired for yelling, belittling and throwing stuff at his players. Many thought Miller never lived up to his potential at Rutgers, but the 6’6” swingman didn’t let the detractors get to him.

“It wasn’t the best four years,” Miller said of his time at Rutgers. He stated that he wished he could have been more of himself during the first two years at Rutgers, but that is the past and he is now trying to get a contract to play overseas. This summer, he is part of the revamped Sterns Trailers unit and he helped the team beat GSS 111-105 in overtime last week.

Millers scored 20 points in the victory and eight came in the overtime period to help Sterns secure the win. GSS Industries took an early 20 point lead on Sterns Trailers, but it was the leaderships of Hamilton and Pastore that was able to keep the younger players from getting discouraged.

“I still don’t have Manny Ubilla or Quincy Douby in my line up,” said Pastore. Both are shooting guards and each can score over 20 point’s per-game. Ubilla has an injury and Douby a former NBA player is trying out for the 76ers. “I did pick up Evictor Nickerson and Mason Jones, but they have to get use to playing with the rest of our guys, but it will not take long.”

Sterns needed the win as they will enter the playoffs with a 7-3 record and are the defending league champions. The playoffs are win or go home, and will start on August 7, at Wall Township High School at 7:15 p.m. 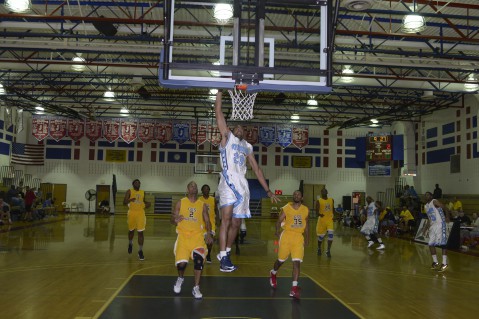 Outracing all the GSS Industries defensive players is Blake Hamilton (23) of Sterns Trailers who scored 23 points in the 126-98 win.