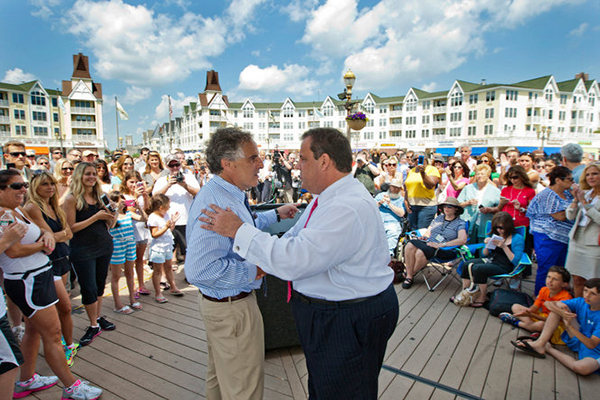 A Cake Boss cake kicked off the summer in Long Branch

A Different View by Adam Schneider

Think of this column as a cross between a thank you note to the summer of 2013 and a post card from a friend already back from vacation. Summer officially ends this week so now is the time to count our blessings and give praise for a great season.

Getting Ready
Going on the beach the day after Sandy was frightening. The boardwalk was moved to the wrong side of Ocean Avenue, the bluff mostly gone, and every set of stairs to the sand was damaged if not destroyed. Six months later public access was restored, showers and bathrooms had running water, and Long Branch was open for business. The effort to get the city ready for summer came from every department, and I thank them all for the dedication and professionalism.
Work on the new and improved boardwalk starts as soon as we know the amount of the FEMA award. The Army Corp will be pumping sand this fall, and then we can rebuild the bluff and the boardwalk. I don’t have a time frame yet, but we are ready to go to work the day we know how much money we have to spend.

Beach Weather
Friday of Memorial Day Weekend started warm and sunny so we celebrated with a ribbon cutting and a fancy cake from Cake Boss of Hoboken. Governor Christie was coordinating a shoreline celebration from Seaside to Sea Bright. By the end of the day rain was falling and the temperature had dropped considerably. The beaches did very little business that weekend. June was rainy and beach receipts lagged considerably behind last year. July was beastly hot and the beaches were mobbed. August was OK and people kept coming. By Labor Day revenue totaled 1.7 million dollars, our second best total ever.
Thursday nights seemed cursed with rainy weather and the Pier Village concerts were moved inside to the Middle School half the time. Still between Oceanfest, concerts, car shows and other events there was something happening three or four nights a week in town.

Thanks To The Governor
Contrary to the betting line, I put on a suit the first time Governor Christie was here. Showing up in shorts at an endorsement was a little too informal, even for me. Pier Village beaches were mobbed on a weekday morning in June. When the governor came back in August I was on vacation and wore shorts and a Clean Ocean Action t-shirt.

Greetings From Breakwater Beach Club
I needed summer more than ever, and summer for me means Breakwater. Huge thanks to the crew that got the place up and running on time. I went in the water on Memorial Day weekend and won’t stop getting wet until October. I spent the summer being 14 years old, hanging out with my summer friends and Amy, riding waves and having fun.

Long Branch Lifeguards,
National Champions!!!
Jennifer Rau, Alex O’Connor, Hannah Elliott, and Hayley Masi took the lead in the last few yards to beat teams from all over the country in the rescue race. The tournament was in California, but there’s an effort going on to bring the National’s to LB in 2015. Everyone got out of the water in one piece this summer, thanks to our highly competitive crew of guards.