STERNS TRAILERS ATHLETES OF THE WEEK 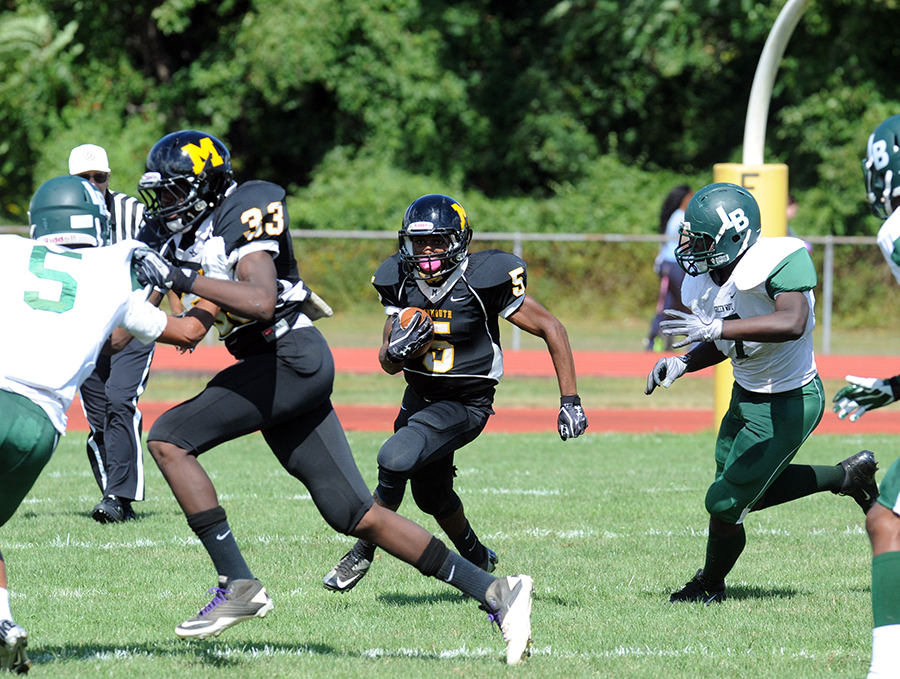 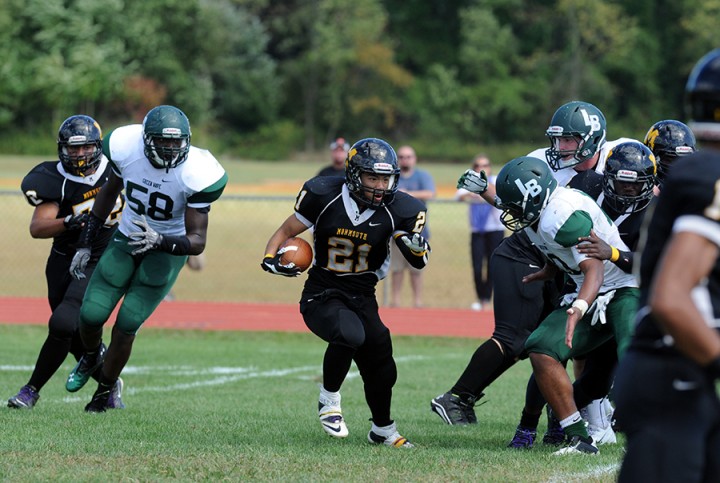 Monmouth Regional High School had a tough start to its 2013 football season. Just before this football season kicked into gear, Jason Morrell resigned as head coach after two years.

With two Long Branch defenders on him Isaiah Searight (1) of Monmouth Regional stretches out for extra yards during the 24-0 loss on Saturday.

Breaking into the open is Monmouth Regional senior running back Michael Reardon (21) during the game against Long Branch. He is being chased by Saquan Gwaltney (58) a 6’3” senior from Long Branch.

Using a stiff arm and trying to break away from a Long Branch tackle is Monmouth Regional’s junior quarterback James Green (12).

It was not a shock to the school administration as they knew Morrell was trying to his own administration job in another district. When it became official that West Deptford was going to hire Morrell, Monmouth Regional knew it was time to advertise for a new football coach.

During his two seasons as the Falcons head coach Morrell’s teams had a 3-17 record. Last year, Monmouth Regional finished 2-8 and during the Thanksgiving Day game at Ocean Township High School a fracas erupted after the game on the Monmouth Regional sidelines.

Taking over as head coach this year is Rich Mosca, who served as defensive coordinator for Morrell the past two years. Mosca is no stranger to the head coach’s position, during the 1970’s he lead Keyport High School was Middletown South’s first head football coach and even had a stint at Monmouth Regional in the 1990’s. From 2002-2010, Mosca coached at Fairleigh Dickinson University.

Mosca stated that he felt the Falcons would improve on last year’s 2-8 record as they had more depth this season and the team was in better condition, stronger and more physical than in the past. It showed in week one as Monmouth Regional traveled to Point Boro and beat the Panthers 27-20. However, week two was not so kind to the Falcons.

This past week Monmouth Regional hosted Long Branch in a nondivisional Shore Conference game. The Falcons started off strong and then completely feel apart in the first half. Long Branch was able to run at will to their right, the left side of the Falcons defensive line. In fact three touchdowns came off Green Wave runs to the right.

Monmouth Regional fans in the stands were getting frustrated watching Long Branch run all over the Falcons defense. All types of suggestions were offered by those fans for the Falcons coaching staff. Mosca and his crew did their best to keep the players focused on the game and one play at a time. When the first half was over Long Branch took a 24-0 lead into the break.

The third quarter was by far the best for Monmouth Regional. They were able to run the ball on the Long Branch defense. Dylan Brown, senior, carried the ball five times to start the second half. On one of those runs he broke away from several Green Wave defenders for 47 yards.

Monmouth Regional on a third and goal from the Long Branch five yard line blew a golden opportunity. James Green, the 6’2” junior quarterback, had his pass tipped at the line of scrimmage and picked off by Earl Mackson, a junior defensive back for the Wave.

A few plays later, Monmouth Regional again moved the ball well against the Green Wave defense. This time the Falcons advanced to the Long Branch 27 yard line. However, Greene was again picked off, this time by Connor Mullan, a senior linebacker for Long Branch. Mullan was knocked out of bounds by Jalen Reyes, a senior guard on the Falcons line. Officials called Reyes for an unsportsmanlike penalty giving Long Branch an additional 15 yards on the Mullan interception.

Monmouth Regional rushed the ball 38 times for 145 yards compared to the 36 times and 219 yards for Long Branch. In the air, Green completed 6 of 13 passes for 73 yards with 2 interceptions. The Falcons had 16 first downs in the game.

Monmouth Regional will have a bye during week three of the season and will return on October 5, when they host Holmdel at 2:00pm. 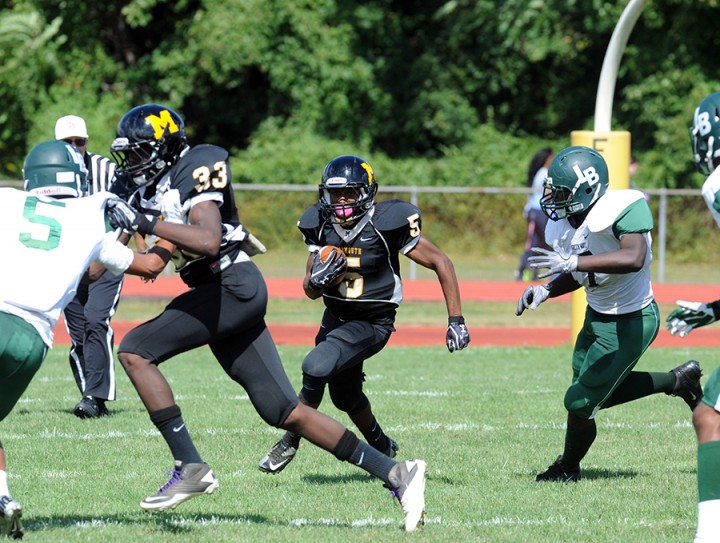