More than a win for Ocean

STERNS TRAILERS ATHLETES OF THE WEEK 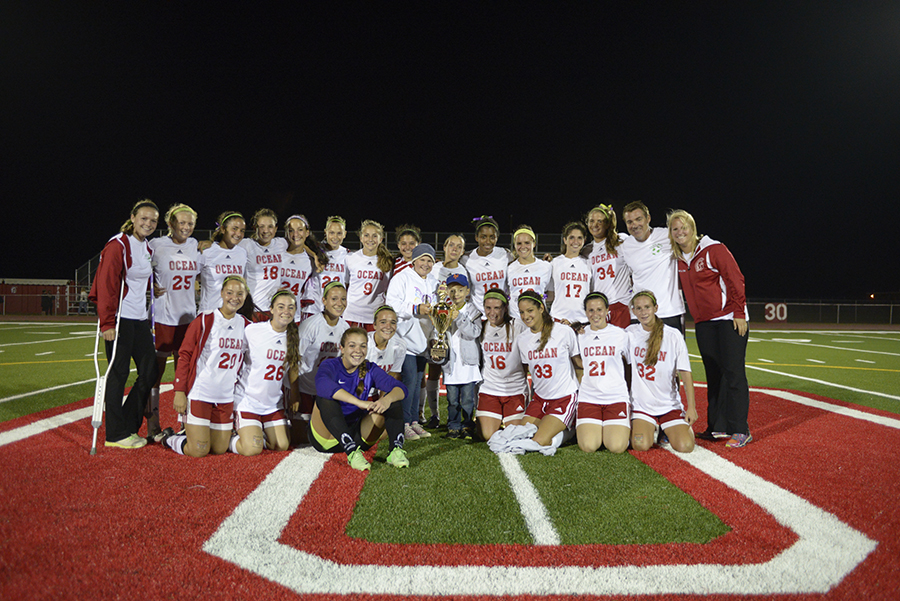 Rosa Franze, a junior at Ocean Township High School, was barely able to speak Saturday night after she kicked the winning goal in overtime as the Spartans beat Brick 2-0 on the turf at Albert F. Carelli Field in the township.

It was not because she was excited that she won the game for the Spartans who improved to 2-2 on the season, it was much more emotional than that. The game was played in honor of Mya Terry, who was born in August 2002, and then diagnosed, with non-Hodgkin’s Lymphoma T-Cell Stage 3 in October 2007.

Mya earned her wings on April 10, 2013 after fighting cancer for six years. Ocean Township as a community opened their hearts and wallets for Mya over the years. Last year the Ocean Township High School girls’ soccer team started the Mya Cup, Kicking Cancers Butt One Game at a Time.

The inaugural game had Ocean beating Red Bank Catholic 1-0. This year, Perry’s Trophy Company in Long Branch had donated a beautiful gold cup which will go to the winning school each year. Colin Sabia, head coach at Ocean had wanted to play RBC again, but the schedule just didn’t work out.

Unfortunately Mya was unable to win her battle with cancer and couldn’t make the game on Saturday night. However, the game and all the funds raised this year were donated to nine year old Tori Lee and six year old Logan Parker, both Ocean Township residents who are also fighting cancer.

“Scoring the winning goal was a great feeling,” said Franze. “As a team we battled hard to win this game in memory of Mya. However, Tori and Logan and other children suffering from cancer are really fighting for their lives every day, all we did was play a game. I’m speechless thinking about the fight they have every single day.”

As Franze wiped away the tears from her eyes she was swarmed by her teammates who were also crying with tears of joy. “This game meant so much to these girls. They were so attached to Mya, and now Tori and Logan. It was not your normal soccer game,” said Sabia.

Brick was not your normal opponent; they are a very physical and aggressive squad. Ocean scored the first, when McKayla Conti kicked it in off an assist from Rachel Ruben. The Spartans had several shots just miss or hit the cross bars, they took a 1-0 lead into the halftime break.

The only goal scored during the second half of regulation play was kicked in by Brick, with only a few minutes to play. Ocean picked up the intensity and really put the pressure on the Brick goalkeeper, but time expired and overtime was needed.

It didn’t take Ocean long to get the winning goal, which Sarah Guss assisted on. As soon as Franze blasted the ball past the Brick goalkeeper the entire Spartan team jumped on her. “During the second half of the game Brick took control of the middle of the field,” said Sabia. “We made some mistakes, but as I said these girls wanted the win and they were not going to settle for anything but a victory.”

Tori and Logan walked to midfield carrying the Mya Cup and received a standing ovation from the large crowd. The entire Spartan team walked to midfield, made a circle around them and started to cheer. It was an emotional night for everyone.

Tori’s parents stated both she and Logan are the fourth and tenth patients in the entire world who have received a radical new treatment where millions of the patient’s T-cells (a type of white blood cell) and insert a new gene that enables the T-cell to kill cancer cells. The altered T-cells, called chimeric antigen receptor cells, then multiply and start killing the cancer. The procedure was performed at the Children’s Hospital of Philadelphia.

Both Tori and Logan are doing very well, and this new experimental treatment might be the answer to fight against cancer.

Additional photos are posted at www.facebook.com/thelinksports 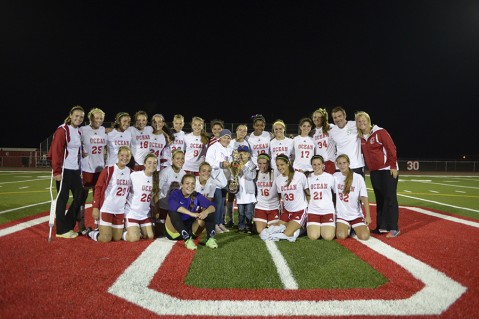 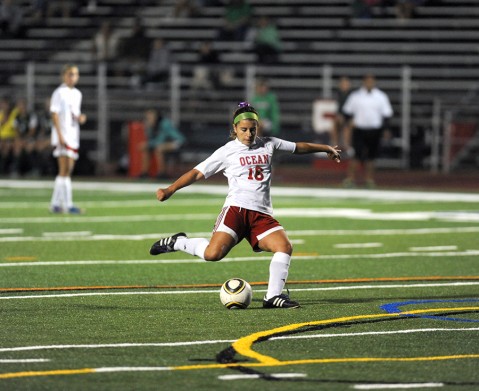 Scoring the winning goal in overtime for Ocean Township was junior Rosa Franze (16) in the 2-1 win over Brick High School.

Scoring the winning goal in overtime for Ocean Township was junior Rosa Franze (16) in the 2-1 win over Brick High School.