Upcoming sports in The LINK 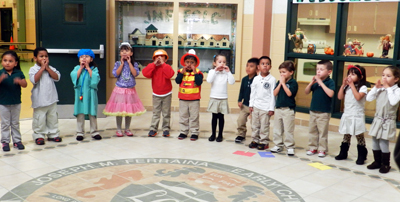 By Patty Booth O’Neill
When Congressman Frank Pallone entered the Joseph M. Ferraina Early Childhood Learning Center Tuesday morning he was greeted by an enthusiastic preschool class singing and acting out “Good Morning to You”. 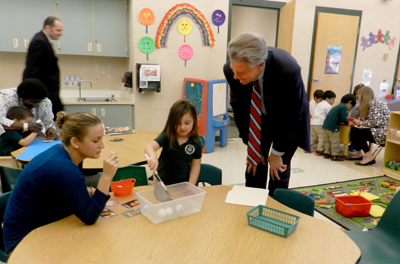 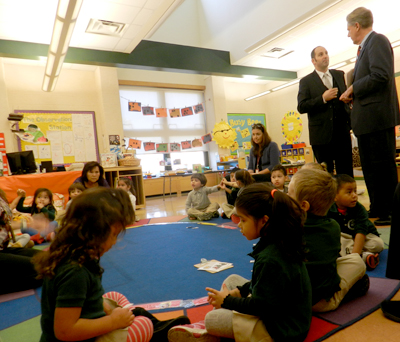 Salvatore and Pallone observe a class. 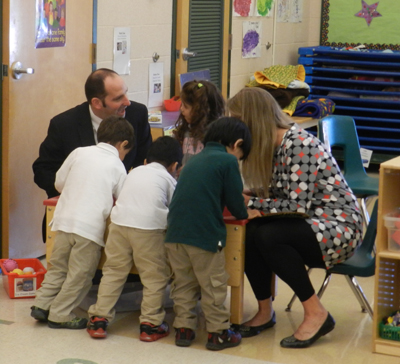 So, what are you learning today?

“This is very impressive,” Pallone said about the school and the ability of the children. Pallone and Cynthia Rice, Senior Policy Analyst of Advocates for Children of New Jersey, which is leading the push for preschool expansion  were escorted on a tour of the school by Superintendent Michael Salvatore and Principal of the preschool Loretta Johnson. They were using The JMF Early Childhood Learning Center as a model because of its commitment to providing a high-quality early learning experience for each of the children who attend. 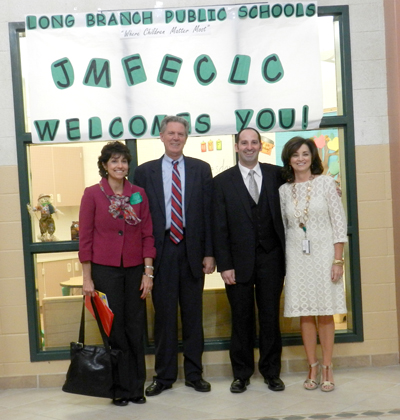 During his visit Pallone called for federal investments to expand access to high quality preschool to address the tens of thousands of New Jersey children who currently lack access to early high-quality education. “A quality pre-school education such as the one these kids are getting in Long Branch should be universal,” Pallone said. He said he would like to see the government more involved in making a quality preschool education available to everyone, not just in New Jersey, but all around the country. He talked about towns with both rich and poor residents that don’t qualify for money from the state like Long Branch did as an Abbot district. He said the poor children don’t have access to a quality preschool education thus they are much further behind affluent students by the time they go to kindergarten.

“A lot of these kids go home to parents who have worked all day, or they don’t speak English,” Salvatore told Pallone as they observed a class that was learning to say hello in many different languages “Here they listen to words all day long, and we have bilingual teachers or aids in every classroom.” 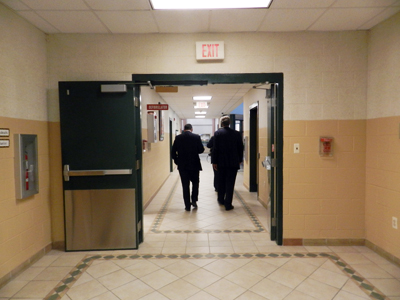 "Well, Mike this school is great but all children should have the same opportunity." "Frank, I agree one hundred percent."

“Investing in our nation’s low-income children through greater access to high quality preschool is a critical step to leveling the playing field for them to succeed later in life,” said Pallone.  “Too often state budgets, like New Jersey’s, are unable to provide enough funding for high-quality preschool, and I believe that the federal government must step in.  High-quality education, including preschool, is instrumental to the growth and success of our nation.”

“While New Jersey has led the nation on providing preschool to low-income children in districts like Long Branch, thousands of children are still denied this early education simply because of where they live,” said Cecilia Zalkind, executive director of Advocates for Children of New Jersey.  “It is best for all children, our communities and our state if young students arrive at kindergarten with the foundation they need to succeed in school.

“It is time for the state to increase its investment in preschool and for the federal government to help states accomplish that goal so all children graduate career- or college-ready,” Zalkind said.

At the end of the tour Rice thanked the district for opening up the school and making her feel like as if she were part of a family. “While it was great to see such a conscientious team of teachers and support staff, it was the children who made it all worth it! As an advocate, not every day starts out so positively!  It is moments like this morning however, that remind me of why it is so important that every child have the opportunity that your 3- and 4-year-olds are lucky to experience.”

“Realizing the state of the economy, it is imperative federal dollars are invested in guaranteed outcomes. One sure way to win investment is the expansion of early childhood education. As literacy standards are increasing with the common core state standards the vocabulary gap will likely expand without additional high quality early childhood programs, said Salvatore. “The greatest equalizer children have is a strong foundation of literacy introduced before age five. Last year we sent more than 95 percent of our seniors to college who were enrolled in our public preschool program 13 years ago.”