Seven seek seats on board 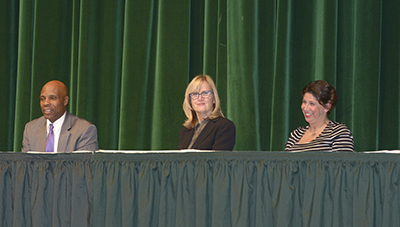 Donald Covin, Michele Critelli and Tara Beams answer questions from the audience at a forum held at the Long Branch Middle School.

Long Branch —Seven candidates are running for three seats on the Long Branch Board of Education.
The Link News sponsored a Candidate Forum on Monday night, attended by three of the candidates, Tara Beams, Michele Critelli, and Donald Covin. Three others were unable to attend but submitted statements, Avery Grant, Dr. Roseann Joyce and Mary Ann Lumia. Also running but unable to attend was George Lynch.

Donald Covin, Michele Critelli and Tara Beams answer questions from the audience at a forum held at the Long Branch Middle School.

Tara Beams
Beams, an incumbent member seeking another term, is Principal at Dr. Gerald H. Woehr Elementary School, Plumstead Township. She is also an adjunct professor at Monmouth University and currently serves as President of the Board of Education. She has worked as a Media Studies Teacher at Sayreville and was the owner of Fast Track Sports Productions. Her college experience includes Northcentral University, University of Phoenix and Rutgers University, and she is pursuing a doctorate in Education.

Donald Covin
Covin, a 1974 graduate of Long Branch High School, went to Trenton State and earned his Master’s from Jersey City State College before returning to Long Branch, where he became a coach and teacher, and then moved on to the administration. He retired after 32 years, but continues to coach basketball – and says he could keep doing that as a volunteer if elected to the board, with the other members’ permission. He is a volunteer at the Adam Bucky James Community Center, a Commissioner of the Long Branch Housing Authority, president of Maestro the Board (which develops funding for housing), and a trustee at Second Baptist Church.

Michele Critelli
Critelli, an incumbent is the K-12 District Supervisor of Guidance at Monroe Township. She has degrees from Rider University and Monmouth College and is pursuing a doctorate in Educational Leadership from Rowan University. A lifelong resident of Long Branch and graduate of Long Branch High School, she was a Past PTP member at the Elberon, Gregory, West End, Middle School, and High School, and Past Pto/A Council President.

Dr. Roseann Joyce
Dr. Joyce, a graduates of the Long Branch school system, has degrees from Stevens Institute of Technology and Columbia University. Her son, a graduate this last year, was captain of the football team and now attends Pace University. “My mission, if elected, as a member of the Board of Education is to enhance the educational experience of all students attending Long Branch Public Schools through a supportive and positive learning environment in order to increase access to higher educational programs by nourishing in the form of time, parent participation, teachers, mentors and money,” she says.

Mary Ann Lumia
Lumia, a lifelong resident of Long Branch has worked for the City of Long Branch Finance Department for 31 years. She is a member of the Long Branch Elks, United Neighbors and a Past President of the VFW Ladies Auxiliary, and is active in the Long Branch School System. In her statement, Lumia says that some members of the board have been on too long, and are “out of touch” with what is going on, and some have to abstain from votes because they have family working in the school system. She also believes that the high school parent teacher conferences are not long enough, there is inequality in the sports programs, and that the school can be unresponsive to complaints unless legal action is threatened.