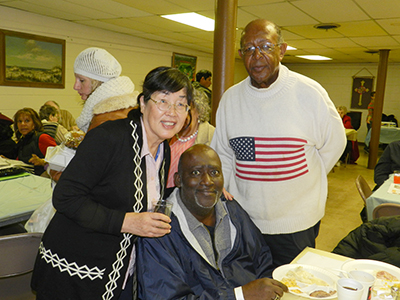 By Patty Booth O’Neill
Long Branch — Thanksgiving was on a beautiful day, and as usual, St. Luke’s Church offered its turkey (and much more) dinner to anyone who wanted to come for something to eat or have someone to eat with. 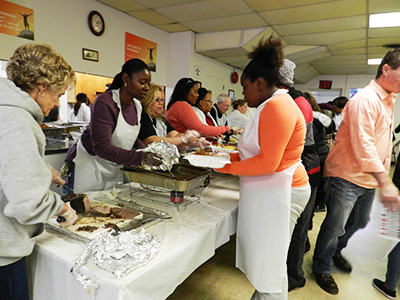 “It doesn’t matter what your financial status is,” said Chef Jerome Turner. “Some people are here because they don’t have anywhere to go for Thanksgiving or they can’t afford food. Everyone is welcome.”

A buffet table was set up in front of the hall, manned by volunteers dishing out food to the line of people. There was constant chatter and clanging of pots and pans behind them in the kitchen, as more volunteers made sure the food was cooked and ready to go.
There was plenty to go around, including over 300 to-go trays.
One thing noticeable from Thanksgivings past was Chef Jerome was sitting at a table eating and not in the kitchen cooking.

Chef Jerome is always in the kitchen.

“On Tuesday morning, I couldn’t breathe and my wife made me go to the emergency room,” Chef Jerome said. “I just got out this morning, and now I’m here.”

Chef Jerome has been battling cancer, and is coming off 19 months of chemotherapy. Recently doctors told him there was nothing more they could do.
“I trust in God’s will,” he said. “I have fed all these people over the years. Now I’m one of them.”

Chef Jerome was in the Army until 1989, but he kept working as West Point Director of Food Services in Fort Monmouth until it shut down. He has earned a college degree from Brookdale CC, and it’s plain to see that his passion is cooking.
One day Chef Jerome was at a little church in Asbury Park that served dinner every Friday after Thanksgiving. He remembers it made him feel so good, and wished he could do something like that. He contacted Avery Grant and asked him if St. Luke’s would donate their space on Thanksgiving.

That was 17 years ago, and the event has grown into Christmas and Easter dinners, also.
“I can’t say enough about Mr. Grant. This couldn’t be done without him,” Chef Jerome said.
He said he sees some of the people only on Thanksgiving. “They just show up. They don’t even have to call. They come prepared to work.”

As he talked, a beautiful grandchild would jump on his lap, climb on his back then drop to the floor and run around the hall. A few minutes later another grandchild would do the same thing. He never batted an eye, and talked with pride about his 13 grandchildren. “One granddaughter is on a full scholarship to Brown University and I have others, too, who are in college,” he said, as another grandchild climbed onto his lap.

Chef Jerome said that the dinners do not always come together smoothly and there are bumps in the road, but this year’s dinner all came together. “On the Friday before Thanksgiving we did not have one turkey,” he said. “But by the time it came to cook the meals, we had 60.”

“I don’t know what we are going to do without him,” St. Luke’s Pastor Jungrea Chung said. “He is responsible for all of this.”

They ended up cooking 45 turkeys, 40 lbs of ham, 90 lbs of roast beef for a carving station, macaroni and cheese, mashed potatoes, corn, green beans, beverages and desserts. As always entertainment, was supplied by Miriam Krieger on the piano.

“Everything was donated,” Chef Jerome said. “I’ve always wanted that from the beginning. I wanted the community to feel that they are a part of this. They make it come together.”
He didn’t know if it would come together this year because he wasn’t able to do as much as he usually does.

“Chef Jerome is a man with a full heart and a deep belief in God,” said Avery Grant. “Even with his affliction, he still wanted to serve the people of the community. He ran everything from his bed!”

Running the kitchen this year was Jerome’s son, Dante Turne,r who is chef at Jersey Shore Medical Center, and volunteers who have shown up over the years and knew what to do. From his table on the other side of the action, Chef Jerome watched with pride.

As diners left, they stopped by to say hello, took Chef Jerome’s hand and thanked him for a wonderful dinner. It wasn’t obvious if people were treating him so kindly because they heard about his condition, or because they knew how special he was. Most likely both.

“I knew God wanted me to do this,” Chef Jerome said. “But the message is more about the volunteers. Look around. Without these people I couldn’t share the blessing that God gave me.”