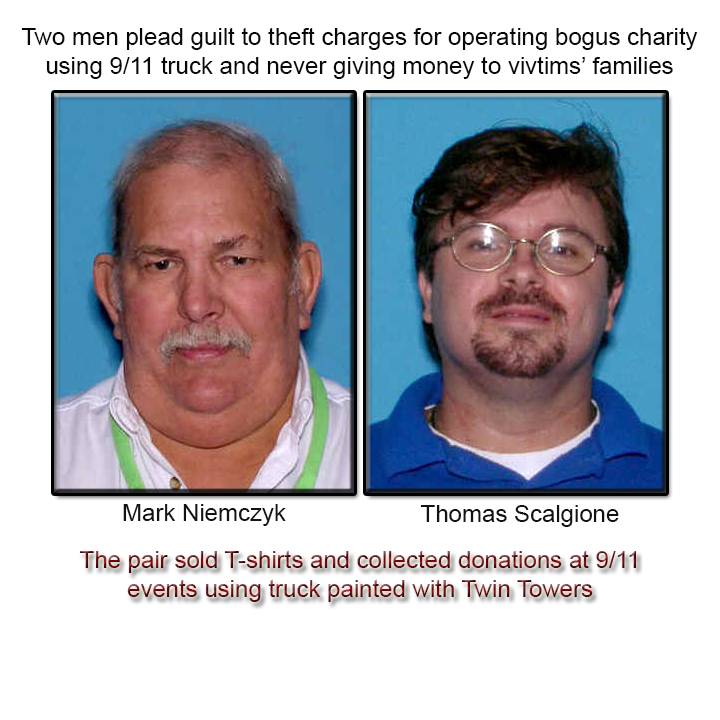 TRENTON – Acting Attorney General John J. Hoffman announced that two New Jersey men pleaded guilty to theft charges today for operating a fraudulent 9/11 charity using a pickup truck painted with the Twin Towers and the names of police and firefighters who died at Ground Zero. They collected thousands of dollars by selling T-shirts and soliciting donations at 9/11 events, but never gave any of the proceeds to the victims’ families or to 9/11 charities as promised.

Mark Niemczyk, 67, of Tinton Falls, pleaded guilty today to third-degree theft by deception, and Thomas Scalgione, 41, of Manahawkin, pleaded guilty to third-degree conspiracy to commit theft by deception before Superior Court Judge James M. Blaney in Ocean County. The charges were contained in a May 3, 2013 indictment. Under their plea agreements, the state will recommend that Niemczyk be sentenced to 364 days in the county jail and a term of probation, and that Scalgione be sentenced to a term of probation. Scalgione was already on probation in connection with charges filed by the Monmouth County Prosecutor’s Office in unrelated matters, and his guilty plea will mean that he will face jail time for violating probation. The two men are scheduled to be sentenced on March 7.

As a condition of probation, the men must comply with the terms of a final consent judgment in a civil action filed by the Division of Consumer Affairs, under which they must pay more than $120,000, representing disgorgement of donations and payment of civil penalties, attorneys’ fees and investigative costs. The judgment bars the men from ever working for any charitable organization in New Jersey.

Deputy Attorney General Sarah Lichter prosecuted the case and took the guilty pleas. The criminal charges stem from an investigation by the Division of Criminal Justice Financial & Computer Crimes Bureau, which began with a referral from the Division of Consumer Affairs.

“These con men shamelessly exploited the generosity of others, enriching themselves by diverting funds that were intended for the families of 9/11 victims,” said Acting Attorney General Hoffman. “These guilty pleas ensure that Niemczyk and Scalgione will carry criminal records for the rest of their lives that will bear witness to their greed and deviousness.”

“These defendants exploited a tragedy for their personal gain, and justice demanded that they face criminal prosecution,” said Director Elie Honig of the Division of Criminal Justice. “We will continue to work closely with the Division of Consumer Affairs to investigate and prosecute those who rip off unsuspecting donors by setting up false charities.”

The investigation revealed that Niemczyk bought a Ford F-150 pickup truck in June 2010 and had it custom-painted with 9/11 themes, including the World Trade Center towers, the logos of the New York City police and fire departments, and the names of the first responders who perished in New York on 9/11. Niemczyk and Scalgione worked as partners to bring the truck to 9/11 events both inside and outside New Jersey, where they sold T-shirts and collected donations. Scalgione acted as the “public relations” person, making arrangements for their participation at 9/11 events with the truck. The men were not registered with the State of New Jersey as a charitable organization as required by law.

The defendants were indicted in connection with their sale of T-shirts and collection of cash donations from June 1, 2010 through July 4, 2012. The two men purchased hundreds of T-shirts that were printed with 9/11 themes similar to those painted on the truck. They purchased the shirts from two vendors, one vendor charging between $3 and $6.90 per shirt, and the second charging $4 to $5. Niemczyk and Scalgione sold the T-shirts out of the truck for $20 apiece at various 9/11 events, where they also put out a jug to collect cash donations.

The two men told people that the proceeds from the T-shirt sales and cash donations would benefit families of 9/11 victims or 9/11 charity organizations. At times, the men represented that they ran an established 501(c)(3) charity or were affiliated with a registered 9/11 charity. The men also displayed a sign that indicated “All donations for the T-shirts go to families of 9/11.” In reality, no proceeds went to 9/11 families or charities. Thousands of dollars in proceeds from the T-shirts and cash donations were deposited into personal bank accounts of Niemczyk and used to pay for personal expenses.

In connection with the prior civil action and final consent judgment obtained by the Division of Consumer Affairs, Niemczyk and Scalgione admitted to committing multiple violations of the State’s Charities Registration and Investigation Act, including operating an unregistered charity. 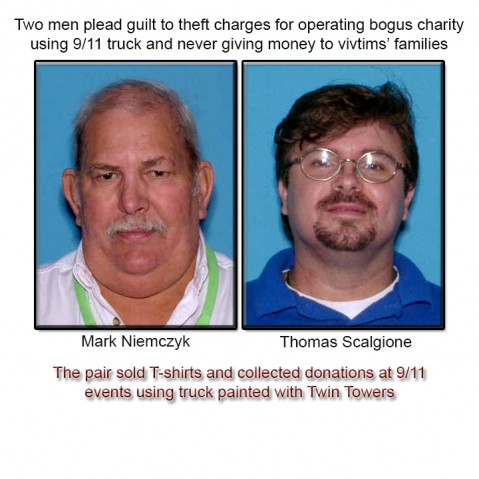